Thanks to the Marcellus Shale, Houston-based Cabot Oil & Gas Corp. recently completed the best quarter in its history on an operational and financial basis. The company is adding a sixth rig in the play as it anticipates multiple infrastructure projects to come online in the months ahead, increasing the ability to get its gas to markets. 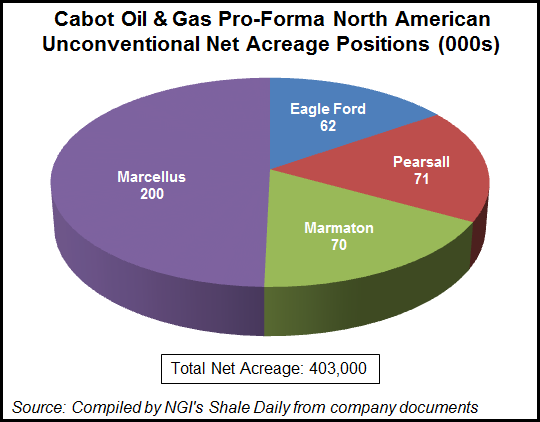 “Our success for the quarter was primarily attributable to the company’s Marcellus Shale drilling program, where operating efficiencies continue to reduce our already low cost structure,” said CEO Dan Dinges.

Production in the second quarter was 95.2 Bcfe, consisting of 90.7 Bcf of natural gas and 763,000 bbl of liquids, representing a 52% increase in equivalent production compared to the second quarter of 2012 and an increase of 7% sequentially over the first quarter. “Marcellus production during the second quarter outperformed our expectations, due in large part to strong well performance and the coordinated effort between our team and our infrastructure partner [Williams] to manage line pressure across the field.”

Natural gas price realizations, including the effect of hedges, were $4.06/Mcf, up 20% compared to the second quarter of 2012. “Although certain basis locations in the Marcellus play experienced some pricing weakness during the second quarter, the net effect on Cabot’s realized price was negligible,” Dinges said. “Looking ahead, we believe gas price differentials will remain soft for the short term throughout the entire Marcellus area.

“However, new takeaway projects slated for this fall should bring differentials closer to their historical averages. We anticipate that this weakness will have a minimal effect on our realized prices in the third quarter.”

In the Marcellus, Cabot is producing 1.2 Bcf/d of gas (gross) from 226 horizontal wells. “Our current Marcellus daily production rate represents a 15% sequential increase from our first quarter exit rate, which is a result of several new wells turned-in-line and the recent commissioning of the Central compressor station at the end of June,” Dinges said. “Though Central’s primary purpose will be as the major discharge station for the Constitution Pipeline in early 2015, we have seen production gains from our existing wells as Central has served to lower line pressure in our initial drilling area.”

Dinges said Cabot would spud the first well utilizing the sixth Marcellus rig in August, and while no impact is expected on 2013 production as additional wells will not be turned-in-line until next year, drilling by the sixth rig will provide a positive impact on 2014 production growth.

In the Eagle Ford Shale, Cabot ran one rig during the second quarter and turned-in-line four wells. The company’s last six Eagle Ford wells with at least 30 days of production data have averaged a 24-hour peak rate of about 900 boe/d and an average 30-day rate of 570 boe/d. The company’s first extended lateral well, which was completed with a lateral length of more than 8,000 feet, had a 24-hour peak rate of 1,130 boe/d and was producing 1,100 boe/d after 120 days of production.

“Based on these results, we are bringing in a second [Eagle Ford] rig at the end of this month that will focus solely on pad drilling, which we anticipate will result in cost savings of more than $500,000 for a typical well,” Dinges said.

Cabot revised 2013 production growth guidance range, increasing the low end to 44% and the high end to 54% to reflect confidence in the timing of the continued infrastructure buildout in the Marcellus during the second half of the year.

The company also increased its 2013 program spending guidance to a range of $1.1 to $1.2 billion to reflect an increase in estimated net wells drilled for the year due to the rig addition in the Marcellus. Cabot now expects to drill 155-165 net wells in 2013, up from the previous guidance of 130-145. This includes an increase in Marcellus wells drilled from 85 to 100 net wells. “Even with this increase in drilling activity, we expect our capital spending to approximate cash flow for the year based on current commodity price expectations,” said Dinges.

Oil price realizations, including the effect of hedges, were $101.39/bbl, down 1% compared to the second quarter of 2012.

All operating expense categories decreased on a per-unit basis relative to the year-ago quarter except for transportation and gathering expense, which increased 4% from 53 cents/Mcfe in the second quarter of 2012 to 55 cents/Mcfe in the second quarter of 2013, primarily as a result of increased natural gas production volumes in the Marcellus, the company said.