Private investment firm Stonepeak Infrastructure Partners is expanding its reach in the liquefied natural gas (LNG) shipping space with the takeover of Teekay LNG in a transaction valued at $6.2 billion. 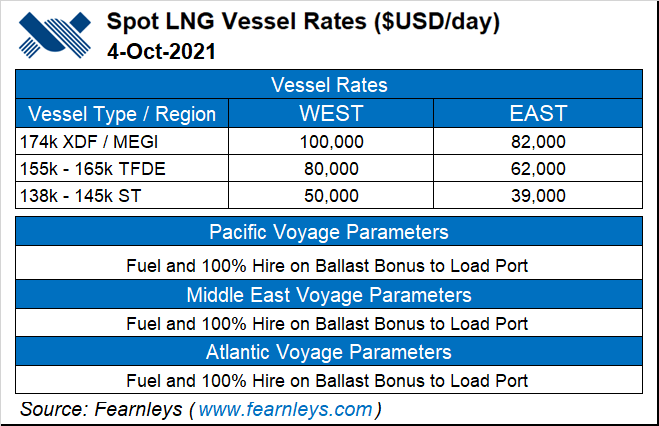 The deal announced Monday would give New York-based Stonepeak access to the third-largest LNG carrier fleet in the world. Teekay owns or has stakes in 47 LNG carriers, 21 mid-size liquid petroleum gas carriers, and seven multi-gas carriers. Teekay said the purchase price of $17/share represented an 8.3% premium to its closing price last Friday (Oct. 1).

The transaction would give Teekay access to capital needed to renew and grow its fleet as new decarbonization rules are set to go into effect at the start of 2023.

“Under Stonepeak’s ownership, we expect Teekay LNG to have improved access to competitively priced capital for both fleet renewal and potential future growth in the next phase of our development, which has not been available through the public equity capital markets for many years,” said Teekay Gas Group Ltd. CEO Mark Kremin.

“We believe that the combination of our existing management and operations teams with Stonepeak, which has a long track record for investing in energy infrastructure, will provide substantial benefits to our customers, employees, joint venture partners and capital providers in the future.”

As part of the deal, Stonepeak would also get Teekay LNG’s stake in the general partner, Teekay GP LLC.

Stonepeak already has investments in the LNG space. In 2019, it injected $1.3 billion into Venture Global LNG Inc.’s Calcasieu Pass development in Louisiana. The company also has a 50/50 joint venture with Golar Power Ltd. to develop LNG carriers, floating storage and regasification units, and associated terminal and power generation infrastructure.

“Stonepeak has long recognized the growing global demand for LNG and importance of natural gas as a bridge fuel, particularly as the world continues to shift toward cleaner sources of energy,” said Stonepeak’s James Wyper, senior managing director.

“Through this transaction, we have an exciting opportunity to invest in a critical energy transition infrastructure business in the form of Teekay LNG’s high-quality, modern fleet of vessels and stable long-term customer contracts.”

The announced transaction is the latest in a string of LNG carrier deals this year. In January, New Fortress Energy acquired Golar LNG Partners as part of a $5 billion deal that expanded its shipping assets as well as its Latin American footprint. In subsequent months, Hoegh LNG Holdings Ltd. was acquired by Morgan Stanley Infrastructure Partners, while Gaslog Ltd. went private with its acquisition by BlackRock Inc.

Golar LNG Ltd., which was not acquired by New Fortress, said in August it may spin off its shipping unit amid a positive outlook for freight rates. CEO Karl Fredrik Staubo said the company was considering several routes, including a partnership with another vessel owner or the public markets.

Freight rates have risen dramatically this year because of increased volatility in the global LNG market. Carrier owners have also warned that future decarbonization efforts could shrink the global carrier fleet as older vessels are retired.

Teekay said the deal was the result of a review of strategic alternatives carried out by the partnership’s board, which has approved the transaction. The transaction still needs shareholder approval and is expected to close by the end of the year.

“We believe this transaction represents a unique opportunity to monetize our position in Teekay LNG while realizing an attractive return on investment for Teekay and for Teekay LNG common unitholders,” said Teekay CEO Kenneth Hvid. “This transaction also provides Teekay with greater financial flexibility to leverage its existing operating franchise and industry-leading capabilities to pursue attractive investment opportunities in both the shipping sector and potentially in new and adjacent markets, which we expect to be dynamic as the world pushes for greater energy diversification.”