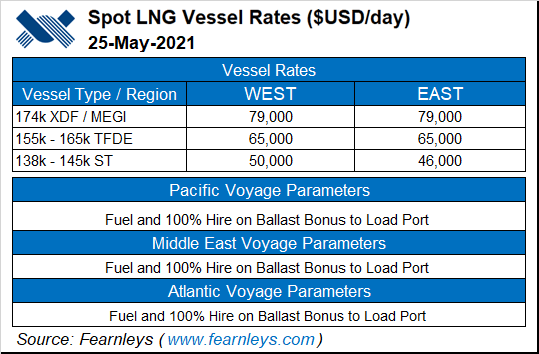 “The market, however, quickly rebounded by the end of March,” Kalleklev said during the recent earnings call. “And the quick turnaround also increased the appetite by charterers for term deals. Nobody really wants to be short shipping after the experience from last winter.”

In April, Flex announced an agreement with Cheniere Energy Inc. to charter four vessels long term, with an option for a fifth vessel. Three carriers are to be delivered this year, with a fourth and possibly a fifth in 2022. The firm charter period for the initial four vessels is 3-3.75 years, with an option to extend by up to two more years.

Since then, Flex has secured two other time charter agreements, one with an unnamed trader and the other with an undisclosed portfolio player. Flex has 22 years of backlog with another 20.5 years of optional backlog, Kalleklev said.

Teekay earlier this month said it also chartered three vessels in March and April. Teekay Spirit is due to finish a five-year dry-dock in 3Q2021.

“It’s unusual to secure charters five or six months in advance, which speaks to the current strength in the spot and term markets,” CEO Mark Kremin said.

“Currently, LNG shipping markets are enjoying counter seasonal strength for numerous reasons, but primarily due to fundamental demand, which gives us confidence that this strength should continue,” Kremin said during the first quarter earnings call. “Importantly, we are still months away from the lead up to the winter seasonal demand period that has caused upward momentum and volatility and LNG shipping rates in previous years.”

The company has fixed 90% of remaining vessel days for the year. Nineteen percent of those contracted days is linked to the spot market, with 71% on fixed-rate charters.

Golar also owns floating liquefaction and regasification facilities. Staubo said the company continues to be optimistic about the upstream potential for LNG.

“We are now in a territory where the gas price suggests that LNG economics are strongest in upstream,” he said. “We’re currently pursuing stranded gas and associated gas reserves that may enable the rollout of our integrated upstream strategy, and we will update the market as soon as we have further developments on this front.”

The management teams of the shippers, all based in Bermuda, also expressed optimism for the longer term. LNG demand is expected to increase but growth in the global carrier fleet may remain sluggish. Staubo said the three Korean shipyards “capable of building high-quality” LNG tankers were filling up with orders for container ships.

“Hence, there cannot be any meaningful additions to the order book with delivery before 2024 at the earliest,” he said. “This makes us very optimistic for the medium- and longer-term outlook for LNG carriers.”

Shippers with older fleets may also face another challenge as the International Maritime Organization (IMO) is set to adopt greenhouse gas reduction rules in June that would take effect in 2023.

“These rules will make headaches in particular for the owners of all the steam tonnage, but opportunities for owners of state-of-the-art ships,” Kalleklev said. Flex has a relatively new fleet, with its oldest carriers built in 2018.

To meet the new IMO requirements, shippers would need to reduce the GHG footprints of their vessels, including reducing speed. They also would need to use “cleaner” fuels such as LNG, ammonia or hydrogen, or make other retrofits to increase energy efficiency, Staubo said.

“For LNG shipping, this will likely result in slow speeding or redundancy of a significant part of the steam carriers,” he said. Steam-powered vessels make up about 42% of the global LNG carrier fleet.

In its quarterly report, Teekay said it was retrofitting some vessels with reliquefaction systems to improve efficiency.

“Those ships will be some of the most efficient in our fleet,” Kremin said.