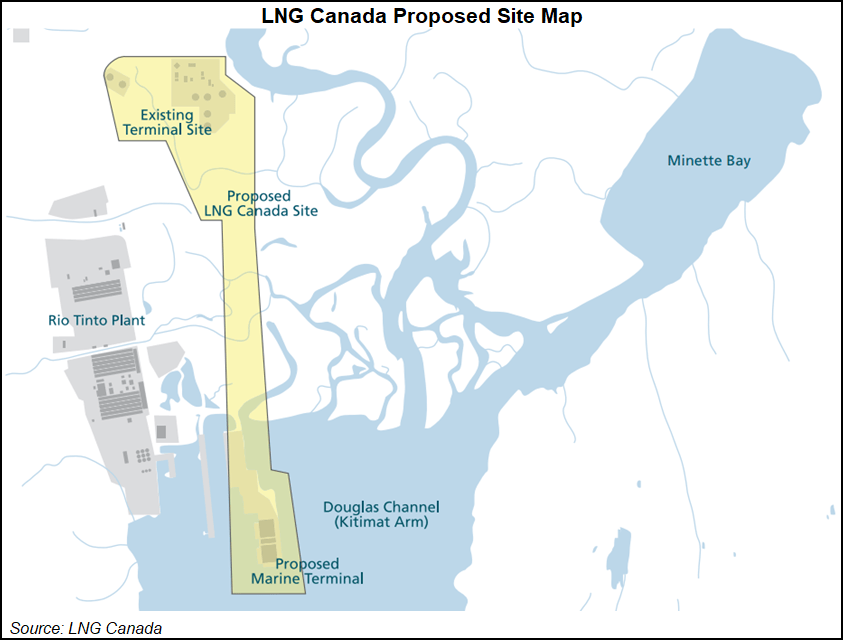 Disclosure of the commercial coup surfaced in a procedural dispute before the Canada Energy Regulator (CER) between Enbridge’s Westcoast network in BC and TC’s supply grid in BC and Alberta, Nova Gas Transmission Ltd. (NGTL).

The dispute is the latest chapter in rivalry between Westcoast and NGTL for traffic from the gas- and liquid byproducts-rich Montney Shale production area in northeastern BC. Links to CGL stand out as the top regional pipeline growth prize.

CGL is under construction for C$6.6 billion ($4.6 billion) as a 670-kilometer (416-mile) express route to the LNG Canada site at Kitimat. The 48-inch diameter pipeline project would be capable of eventually carrying more than 5 Bcf/d as the export terminal is expanded in stages.

TC is building CGL for LNG Canada. However, senior partners in the export terminal, Shell and Petronas Energy Canada, said TC’s construction contract does not give NGTL all the growth in northern BC gas traffic.

A Petronas filing at the CER supported the Westcoast flow meter project, titled Silverstar, noting the TC pipeline family “isn’t impacted by the application beyond its missed opportunity to monopolize the supply of gas to CGL…

“Petronas chose to do business with Westcoast following a collaborative process that has led to a good economic and commercial outcome.”

The Silverstar meter would serve a 3 kilometer (1.8-mile), 36-inch diameter pipe link named Stella, ultimately capable of moving 2.3 Bcf/d, which Petronas has BC approval to build between CGL and Westcoast.

The Westcoast pipeline coup has support outside the LNG Canada ownership group. A CER filing by Painted Pony Energy, a Montney gas specialist, opposed a demand by NGTL for a potentially long regulatory hearing on the Silverstar meter.

“Our industry has been actively pursuing LNG opportunities for decades and finally has a large-scale project underway,” said Painted Pony management. “This new market creates an opportunity for all producers in our basin.