Western Canada natural gas production is expected to grow by 42% to 22.5 Bcf/d over the next 12 years, according to a forecast by TransCanada Corp.’s Nova Gas Transmission Ltd. (NGTL) supply collection network. 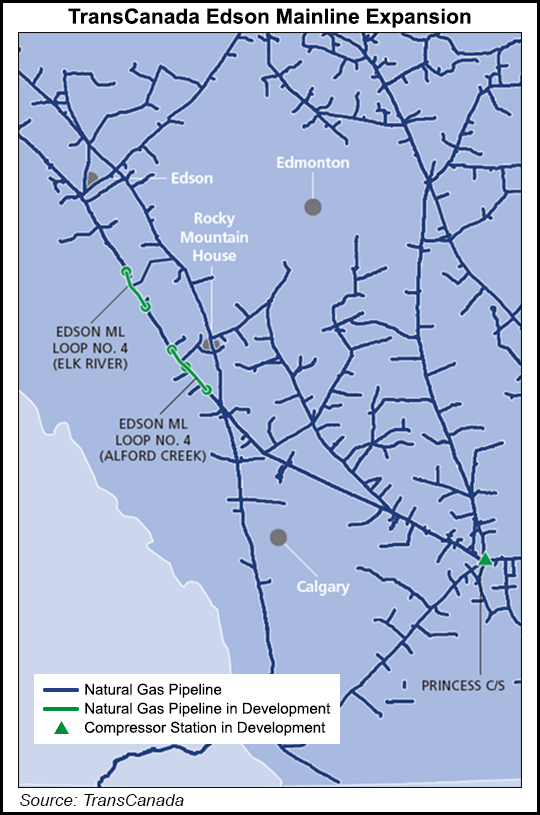 Called the Edson Mainline Expansion, the project is named for a town on the NGTL route to markets from northern gas fields. The project would cater to rising Alberta consumption that shows in long-term delivery bookings that require pipeline capacity increases.

Western Canadian markets “are diverse, stable and growing,” NGTL said in its construction application for the Edson expansion filed with the National Energy Board (NEB).

Industrial gas use stands out as the strongest Alberta growth driver. NGTL’s new forecast anticipates a 31% jump in consumption by oilsands production to 3.4 Bcf/d as of 2030.

Gas use in Alberta power generation, encouraged by provincial government policy of entirely phasing out coal by 2030, is forecast to grow by 133% to 700 MMcf/d.

The new forecast also indicated that TransCanada expects the 24,000-kilometer (14,400-mile) NGTL grid to keep its decades-old dominant share of the gas transportation market in Alberta and British Columbia (BC).

Other TransCanada regulatory and corporate filings show ambition for NGTL to carry new flows for liquefied natural gas (LNG) exports from the Pacific coast, in competition with Enbridge Inc.’s Westcoast network in BC.

NGTL ambitions include supplying the separate Coastal GasLink pipeline that TransCanada has begun building as a service contractor for LNG Canada, a 48-inch diameter line rated for up to 5 Bcf/d. LNG Canada, led by a unit of Royal Dutch Shell plc, is underway on the BC coast near Kitimat.

Separately, Chevron Canada Ltd. and Woodside Energy Ltd. recently applied with NEB for a 2.7 Bcf/d export license for their proposed KM LNG terminal that also would be sited in Kitimat.