Undetected hairline fractures caused an October 2018 rupture, explosion and fire on a British Columbia (BC) pipeline that disrupted for weeks Pacific coast natural gas supplies in the United States and Canada, according to the Transportation Safety Board of Canada (TSBC). 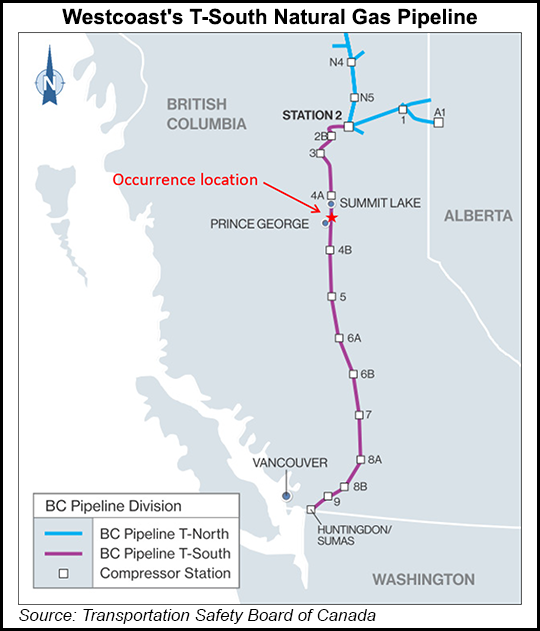 The blast near Prince George scooped out a crater 115 feet long, 43 feet wide and 30 feet deep. Nearby communities were evacuated. More than half of Westcoast’s gas traffic to the U.S. Pacific Northwest and southern BC stopped.

An inferno that followed the burst incinerated 140 MMcf of gas, the TSBC said. Another 30 MMcf was vented into the atmosphere from another, smaller pipeline beside the accident site as a safety precaution.

The Westcoast system had an SCC hazard management plan, noted the TSBC. Canadian pipelines adopted fracture detection programs 20 years ago following an inquiry by the former National Energy Board (NEB), now the Canada Energy Regulator (CER), into a series of ruptures, explosions and fires.

In the BC case, however, the remote danger spot, a nine-hour drive north of Vancouver, eluded the safety net.

“The extent of the existing cracking on the segment of pipe that ruptured was not identified,” said the TSBC. “The model used to predict crack growth did not take into account all potential uncertainties in the predicted crack growth. This resulted in cracks growing at higher rates than the model predicted.

“Additionally, an inspection of this pipeline segment scheduled for 2017 was deferred until the fall of 2018. As such, the existing cracks remained undetected.”

The aging Westcoast network has about 500 kilometers (300 miles) of pipe wrapped in a type of coating that is liable to separate from the metal and leave the exposed spots vulnerable to SCC, said the TSBC.

CER only allowed the repaired BC gas conduit to resume full operation in December, after enforcing pressure restrictions as a safety measure for 13 months of inspections and maintenance.

“We commit that we have learned from this incident and have taken steps to ensure the safety of our natural gas system,” Enbridge Vice President Michele Harradence said.

Enbridge said its BC network has been scrutinized for flaws to prevent more accidents. The safety plan uses an improved inline SCC detector that travels through the pipe hunting for flaws with twice the crack sensors of previous models.

CER said analyzing “noncompliances and incidents like this one play a critical role in advancing our regulatory oversight.”

Regulatory expectations of Canadian pipelines include learning from mishaps and adopting improved safety technology and procedures, said the watchdog agency.

“We hold ourselves to these same expectations,” said CER regulators. “Experimenting with data analysis is helping us understand trends and risks that might otherwise be missed.”