Continuing economic sluggishness brought on by Covid-19 mitigation efforts is weighing down demand for natural gas, but there could be a price uptick on the horizon, according to the U.S. Energy Information Administration (EIA). 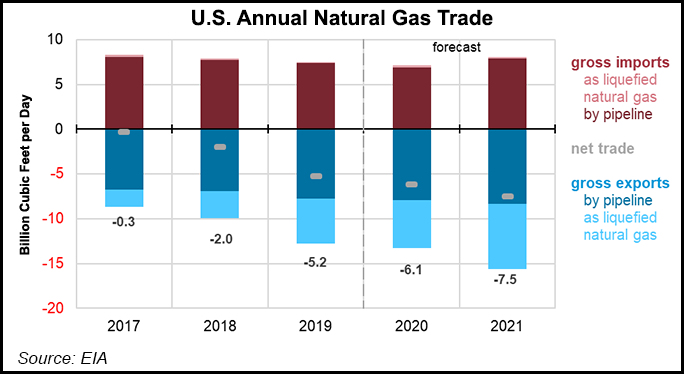 Henry Hub spot prices are expected to average $2.46/MMBtu in 4Q2020, bringing the 2020 average to $1.93/MMBtu, EIA said in its latest Short-Term Energy Outlook (STEO), which was released Tuesday. That full year forecast is down 11 cents from the agency’s previous STEO. EIA also said it expects the Henry Hub price will average $3.10/MMBtu in 2021 – two cents higher than forecast in the previous STEO — as falling production levels continue to exert upward price pressures.

“Henry Hub spot prices averaged $1.63/MMBtu in June, down 12 cents/MMBtu from May and the lowest inflation adjusted monthly average price since at least 1989,” EIA said.

“Currently, the effects of reduced natural gas demand are outweighing the effects of falling U.S. natural gas production and are contributing to low natural gas prices. EIA expects that these conditions will largely persist in the coming months, keeping the third quarter average price at $1.65/MMBtu. However, EIA expects general upward price pressures to emerge later in 2020 as demand for natural gas increases and production continues to decline, particularly in the fourth quarter when space heating demand rises.”

EIA forecasts the low point in natural gas production to occur in the second quarter of 2021 at an average of 83.3 Bcf/d, which would be down 12.7 Bcf/d (13.2%) from the 4Q2019 peak. “However, toward the second half of 2021, as Henry Hub prices rise and economic conditions become more favorable, EIA expects dry natural gas production to increase, reaching 85.6 Bcf/d in the fourth quarter of 2021,” according to the STEO.

“U.S. LNG exports averaged 7.7 Bcf/d through the first four months of 2020, but declined by 17% between April and May,” EIA said. “A mild winter and Covid-19 mitigation efforts have led to declining global natural gas demand and high natural gas inventories in Europe and Asia, reducing the need for LNG imports. Historically low natural gas and LNG spot prices in Europe and Asia have reduced the economic viability of U.S. LNG exports, which are highly price sensitive.

As a result of those cancellations, U.S. LNG exports averaged an estimated 3.6 Bcf/d in June, and EIA forecasts that they will average 2.2 Bcf/d in July and August, implying a 25% utilization of LNG export capacity. EIA expects LNG exports to increase beginning in September and average 7.1 Bcf/d from December through February as global natural gas demand gradually recovers.

Houston-based drilling expert Superior Energy Services is to emerge debt-free from bankruptcy after its plan of reorganization received court approval. The U.S. Bankruptcy Court for the Southern District of Texas confirmed the reorganization plan, which allows Superior to convert into equity an estimated $1.3 billion in debt. “This confirmation order marks a key milestone in…