Demand for natural gas is expected to increase next winter and production is expected to decline, causing upward pressure on prices, resulting in Henry Hub spot prices averaging $3.08/MMBtu in 2021, according to the Energy Information Administration (EIA). 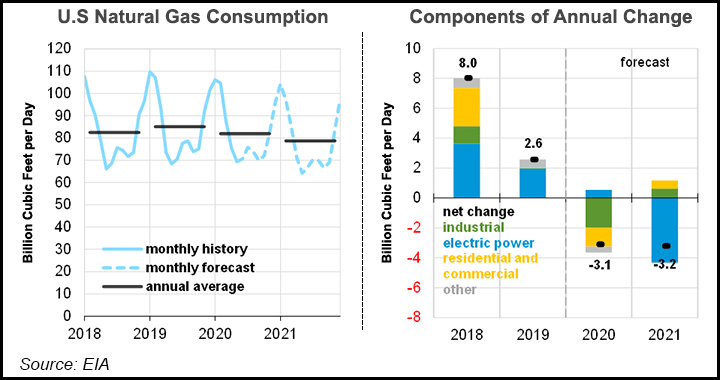 Henry Hub prices this year, on the other hand, are expected to average just $2.04/MMBtu, according to EIA’s latest Short-Term Energy Outlook (STEO), which was released Tuesday.

“EIA forecasts that relatively low natural gas demand will keep spot prices lower than $2/MMBtu through August,” the agency said. “However, EIA expects prices will generally rise through the end of 2021. EIA expects that natural gas price increases will be sharpest this fall and winter when they rise from an average of $2.06/MMBtu in September to $3.08/MMBtu in January.”

Rising demand heading into winter, combined with expected production declines, will give prices a boost despite EIA’s forecast of record end-of-October storage levels, according to the STEO. Last week, EIA reported an injection of 102 Bcf in natural gas storage for the week ending May 29, bringing total Lower 48 inventories to 2,714 Bcf, significantly higher than the year ago total of 1,952 Bcf and the five-year average of 2,292 Bcf.

In May, the Henry Hub spot price averaged $1.75/MMBtu, and EIA expects relatively low demand will keep spot prices below $2/MMBtu through August before they begin edging higher through the end of 2021. The front-month natural gas futures contract for July delivery at the Henry Hub settled at $1.82 on June 4, down 7 cents compared with May 1, EIA said.

EIA expects that U.S. liquefied natural gas exports will decline through the end of summer as a result of reduced global demand, averaging 5.6 Bcf/d in 2Q2020 and 3.7 Bcf/d in 3Q2020.