Sanchez Energy Corp., which targets the liquids-rich Eagle Ford Shale, charted first quarter production of 355,000 boe, an increase of 106% from the fourth quarter and 320% from the year-ago period, the company said. 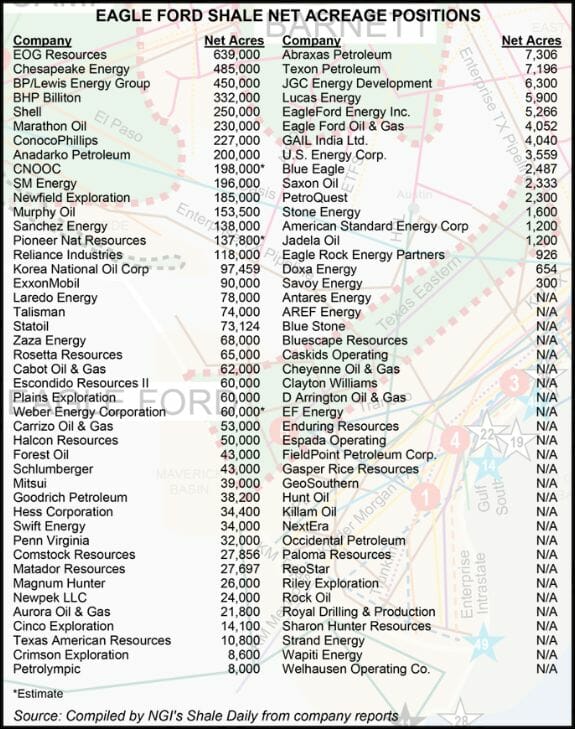 “Currently, we are producing in excess of 6,000 boe/d and expect further significant production increases in the second quarter of 2013 as we currently have 12 gross (7.5 net wells) in initial flowback, undergoing completion, or waiting on completion, leaving us well on track to meet or exceed our production and exit rate targets for the year,” said CEO Tony Sanchez.

Sanchez Energy has interests in 19 producing wells, three wells in initial flow back, three wells undergoing completion, three wells waiting on completion and two wells currently drilling in its Palmetto area of Gonzalez County. Since the end of the first quarter, three wells have been turned to sales with average initial production rates of 1,200 boe/d.

The company has eight producing wells, two wells undergoing completion, one well waiting on completion, and one well currently drilling in its Marquis area of Fayette and Lavaca counties. One rig is continuously working in the Prost area with a second rig under contract to arrive in June. The five recent wells brought online have average initial production rates of 1,044 boe/d.

In the Maverick area of Zavala and Frio counties, Sanchez has 14 producing wells and said its plans are to drill two wells during 2013 with the first to be spud in late May or early June. The well will have a vertical pilot hole through the Pearsall formation, including logs and cores, and then land a lateral in the Eagle Ford section, Sanchez said.

With production expected to grow, Sanchez is doubling its processing and takeaway capacity in Palmetto to 20,000 b/d of liquids and 30 MMcf/d of gas. In the Marquis area, the company is constructing a gathering system to support the existing and future increases in production.

Last month Sanchez said it was buying producing acreage in the Eagle Ford for $265 million that will more than double current company-wide production and increase proved reserves by 63% (see Shale Daily, March 20).

“…[W]e are conducting our final due diligence and expect to close the acquisition before the end of the second quarter,” Sanchez said. “These Eagle Ford assets will significantly add to our current production rate and increase our financial flexibility and funding capacity.

“With the acquired assets expected to provide a stable level of production and low risk development drilling locations, we believe they will generate sufficient cash flow to fund our currently contemplated development drilling program in this area. Given our growing operating momentum from our current assets and the planned new asset acquisition, we anticipate exiting 2013 with a pro forma production targeted exit rate range of 12,500 to 14,500 boe/d.”