Russia is moving to further tighten its grip on the nation’s oil and natural gas supplies, issuing a decree for the country to take over the Sakhalin-2 liquefied natural gas (LNG) export project on Sakhalin Island north of Japan. 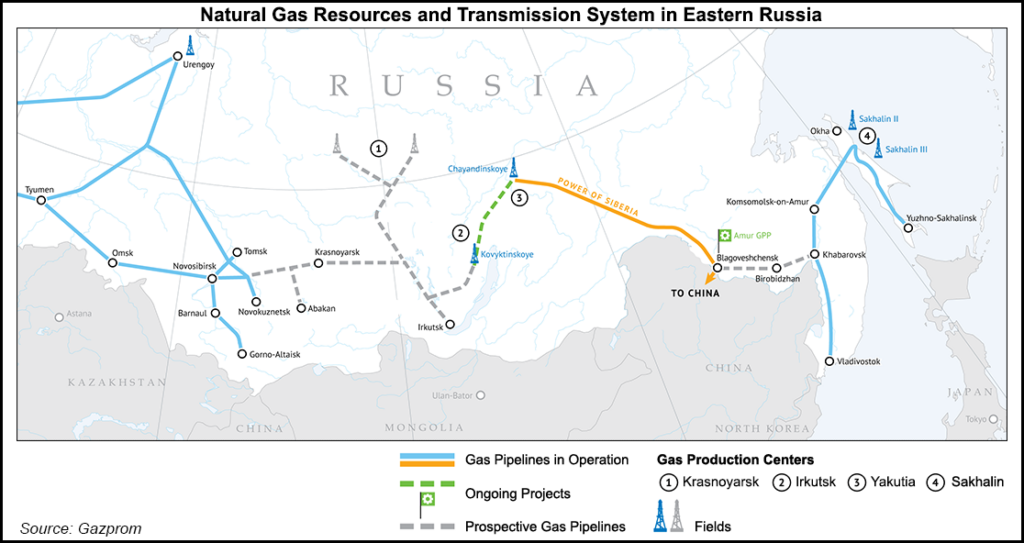 An executive order signed by Russian President Vladimir Putin to “protect the national interests” calls for establishing a Russian limited liability company to take over the rights of a partnership between Shell plc, Gazprom PJSC and Japanese trading houses Mitsui & Co. Ltd. and Mitsubishi Corp. The move could ultimately force the foreign entities out of their ownership positions.

The “ownership of the company’s property, created within the framework” of a production sharing agreement signed in 1994 “shall be transferred forthwith to the Russian Federation,” according to the executive order that was dated June 30.

Stakeholders said Friday that they were reviewing the decree. It has raised red flags in the energy sector, particularly in Japan, which relies on Russia for a significant portion of LNG imports.

“The move by Putin is certainly unnerving for Japan, but I don’t think that Moscow is trying to end all LNG deliveries to Japan, because at the end of the day, Japan pays a lot of money for Russian LNG, money that the Russian state needs,” said Yuriy Humber, CEO of the Tokyo energy consultancy Yuri Group.

“However, if the Kremlin does take such a decision — throw Japan out of Sakhalin-2 — then it shows a high level of vindictiveness, an emotional and not a strategic response,” Humber told NGI.

Foreign entities with interests in Sakhalin-2 have one month to apply for shares in the new Russian company. Kpler’s Laura Page, a senior LNG analyst at the data and analytics company, said it’s likely Japanese utilities will put emergency plans in place.

“This could include buying LNG from the spot market and building inventories,” Page told NGI. “It would certainly be hard for Japan if LNG supplies were halted – Sakhalin-2 made up about 9% of total LNG imports in 2021.”

The executive order was signed in “response to unfriendly actions,” mainly undertaken by the United States and its allies following Russia’s invasion of Ukraine, the Kremlin said. The move also comes as Russia has increasingly curbed natural gas exports to Europe, where some customers have been cut off altogether and larger buyers have more recently seen a reduction in Russian pipeline flows as they try to stock up ahead of winter.

State-owned Gazprom PJSC said Friday that its gas exports to countries outside the former Soviet Union dropped 31% year/year between January and June.

Europe relies on Russia for roughly 40% of its natural gas supplies. Buyers there have been working to displace those volumes. International Energy Agency Executive Director Faith Birol said on Twitter Thursday that Russia’s steep delivery cuts pushed June U.S. LNG imports in Europe ahead of Russian pipeline gas for the first time in history.

Sakhalin-2 develops the Piltun-Astokhskoye and Lunskoye oil and gas fields off the northeastern coast of Sakhalin Island, where the 11.5 million metric tons/year LNG facility is located.

Japan is aiming to cut its reliance on Russian natural gas as well. It has imposed sanctions on the federation, but officials have said the country won’t exit Sakhalin-2. Trade Minister Koichi Hagiuda told a press conference Friday that the country is aiming to secure more LNG supplies on the spot market and explore how the order could ultimately limit the country’s interests in the project.

Japan imported 3.5 million tons (Mt) of LNG from Sakhalin-2 between January and June, according to Kpler. The firm’s data shows the terminal accounted for 12% of all the country’s LNG imports last month.

The Kremlin’s decree could also complicate Shell’s exit from Sakhalin-2. Shell said earlier this year it would end its involvement in “all Russian hydrocarbons,” setting the stage to dump its 27.5% stake in the project. The announcement was part of a broader exit among western energy companies and others throughout the world after the war in Ukraine broke out. ExxonMobil also decided to exit the Sakhalin-1 oil and natural gas venture.

China is reportedly in discussions to acquire Shell’s position in Sakhalin-2 as the country has stepped-up its imports of Russian energy.

Kremlin spokesman Dmitry Peskov reportedly told news media during a conference call that LNG supplies from the project are not in jeopardy and the decree is not a move to nationalize the Sakhalin-2 project.