The environment for North American liquefied natural gas (LNG) final investment decisions is looking brighter in 2022, with buyer interest in long-term contracts on the rise amid record-high spot prices. 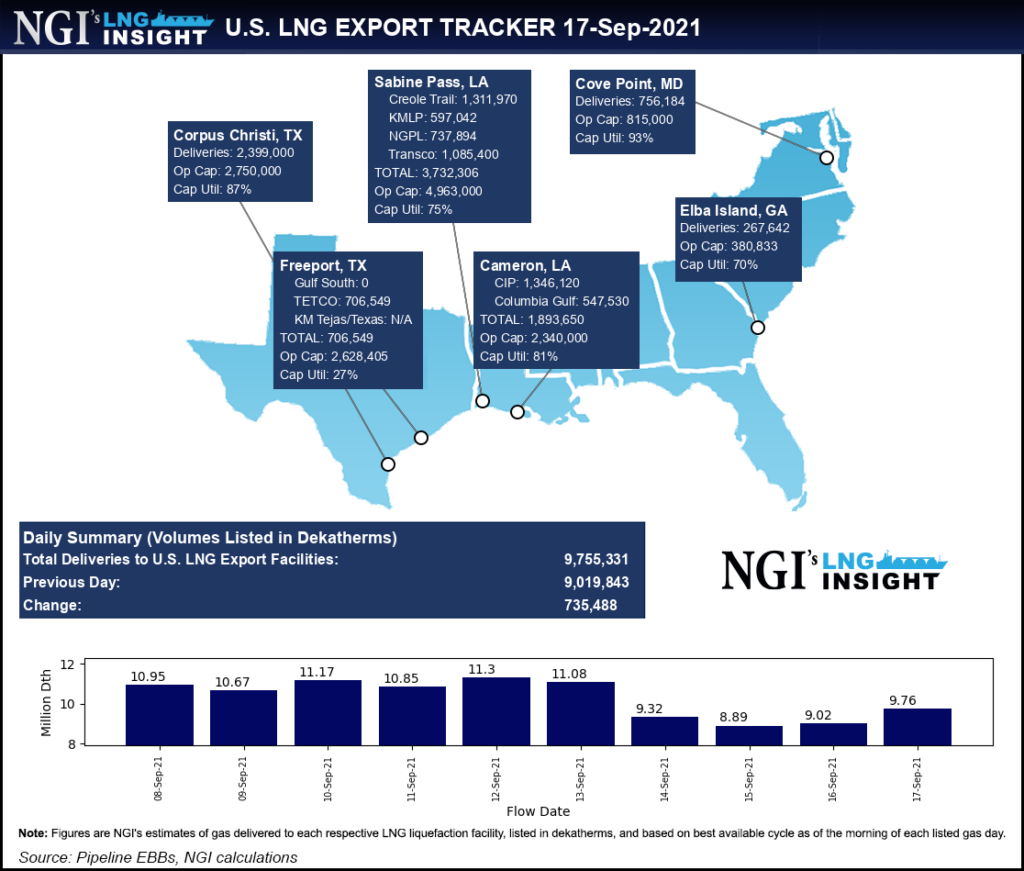 While the Covid-19 pandemic caused global demand to soften and resulted in project delays in 2020 and 2021, a handful of North American projects are expected to move forward next year.

But things have turned around in less than a year, with unseasonably high Japan-Korea Marker (JKM) prices. That “could be the final push that some buyers need to forego the volatility in the spot market for a long-term contract,” McLean told NGI’s LNG Insight.

Globally, sale and purchase agreements for 53 million metric tons (mmt) were signed in the first eight months of 2021, compared to just 16 mmt in 2020, according to figures from Rystad Energy. Of the SPAs signed this year, 11 mmt-worth were for U.S. projects, while Woodfibre LNG in British Columbia, Canada signed an agreement with BP plc for another 0.75 mmt of capacity.

“We are likely to see the return of North American LNG FIDs in 2022,” said Rystad Energy vice president of markets Sindre Knutsson. “Given the current demand and prices, buyers are willing to sign long-term contracts and sellers are getting the budgets back.”

And although the window for reaching FID sometime this year is dwindling, there is a possibility that at least one U.S. project could move forward by the end of 2021. Freeport LNG’s Train 4 expansion in Texas is the likeliest candidate, Knutsson told NGI’s LNG Insight. While the 5 mmty project has yet to announce any offtake contracts, Freeport LNG CEO Michael Smith said over the summer the company was in talks with several potential buyers.

“We believe we will have to wait until 2022 to see a North American FID, but never say never,” Knutsson said. “Freeport Train 4 have signaled that they may have enough offtake to move forward by the end of 2021.”

Looking ahead, Knutsson and McLean said two greenfield projects are expected to move forward in 2022. Those would be the first phase of Tellurian Inc.’s 27.6 mmty Driftwood LNG project, and the first phase of Venture Global LNG Ltd.’s 20 mmty Plaquemines LNG terminal, both in Louisiana.

Tellurian has signed the majority of the U.S. LNG offtake deals so far this year, securing 9 mmty in supply contracts. That is enough for it to take the 10 mmty initial phase forward, and Tellurian has targeted a 1Q2022 FID.

The company still has to secure financing for the project, though. That could be difficult, since the SPAs are for 10-year terms instead of the 20-year contracts that underpinned the first wave of U.S. LNG developments, according to a recent report from RBN Energy LLC. The company also needs to acquire about 1.5 Bcf/d of upstream production to feed the facility.

Nevertheless, RBN said the facility “looks extremely likely to go ahead next year.”

Meanwhile, early construction activities have already begun at Plaquemines LNG, and a project schedule on Venture Global’s website has “financial close” pegged for the end of 2021. The project recently got a tailwind from an agreement with Polish Oil & Gas Co., aka PGNiG, for an additional 1.5 mmty of LNG supply, bringing the total under contract with PGNiG to 4.5 mmty. Adding on a 1 mmty SPA with EDF announced last year, Plaquemines now has half of the 10 mmty first phase under contract.

However, the developer may wait for its flagship Calcasieu Pass LNG facility, also in Louisiana, to enter service this winter before moving forward on Plaquemines, McLean said.

One greenfield project, however, seems less certain to move forward: NextDecade Corp.’s 27 mmty Rio Grande LNG project in Texas. The company has revamped its facility design, slimming it down from six planned trains to five, and incorporated carbon capture and sequestration to reduce its environmental footprint. It is still targeting a 2021 FID for an initial two-train, 11-mmty phase, according to an August investor presentation. But it has only signed one offtake agreement (with Royal Dutch Shell plc) for 2 mmty of capacity.

A number of less costly brownfield projects are also expected to move forward.

“Outside of Plaquemines LNG and Driftwood LNG, the appetite for major investments in large-scale projects has dissipated which has been reflected in delayed FIDs and outright cancellations,” McLean said.

The brownfield projects likely to reach sanction next year include Freeport LNG Train 4 (if it does not take FID this year), Cheniere Energy Inc.’s Corpus Christi Stage 3 expansion, and a proposed expansion at Sempra’s Cameron LNG project.

Cheniere recently said it intends to sanction Stage 3, which would consist of up to seven modular trains capable of producing more than 10 mmty, sometime next year. The company earlier this year signed an integrated product marketing agreement with Canada’s Tourmaline Oil Corp. Under the deal, Tourmaline  would supply the expansion with 140,000 MMBtu/d of natural gas for 15 years beginning in 2023.  Cheniere would then market and sell 850,000 metric tons/year and deduct shipping and liquefaction charges from the price (indexed to JKM) it pays for the gas. It has signed similar deals with Apache Corp. and EOG Resources Inc.

Meanwhile, Sempra has signaled it could take FID at the Cameron expansion by the end of 2022. The company recently scaled back the project from two trains capable of producing 9.97 mmty to a single 6 mmty train. The new design would reduce spending and greenhouse gas emissions and not require additional tanks or berths, management has said. Sempra has also said that its greenfield Port Arthur LNG project, previously scheduled for a 2022 FID, would now be a “longer-term” development than the Cameron expansion.

Outside the United States, Woodfibre LNG may reach sanction next year if it doesn’t go ahead in the final months of 2021, Knutsson said. Including the recent BP deal, the project has sold off more than 70% of its annual capacity.

In addition, Mexico Pacific Ltd. recently said it was targeting early 2022 to take FID on its export terminal on Mexico’s west coast. CEO Doug Shanda told NGI that 22 mmty of binding offtake capacity was under negotiation for the project, including 14 mmty for which memorandums of understanding (MOU) have been signed. The company is aiming to bring the first two trains, with a combined capacity of 9.4 mmty, online in 2025.

Elsewhere in the world, Woodside Energy Inc. is planning to sanction its Pluto LNG Train 2 expansion this year. The project would effectively double the Australian facility’s capacity to 10 mmty. FID could get pushed to next year if Woodside fails to take it this year, Knutsson said.

“It’s mostly all about North America in 2022, while there are still some candidates in Russia, Nigeria and Papua New Guinea, but they are more likely to get pushed into 2023,” he said.

McLean added that Russia seems the next most likely to sanction a new project but “a lot may depend on how their current projects fare and the success (or failure) of Nord Stream 2 in Europe.” In addition, “some smaller exporters like Malaysia have been rumored to be looking at adding additional facilities, but they are generally smaller in scale compared to the projects in the United States or Russia,” he said.