A pair of bills designed to tap “affordable natural gas in the MarcellusShale” and bring gas service to more consumers in Pennsylvania has been approved by the state’s Senate and moved to the House of Representatives for consideration. 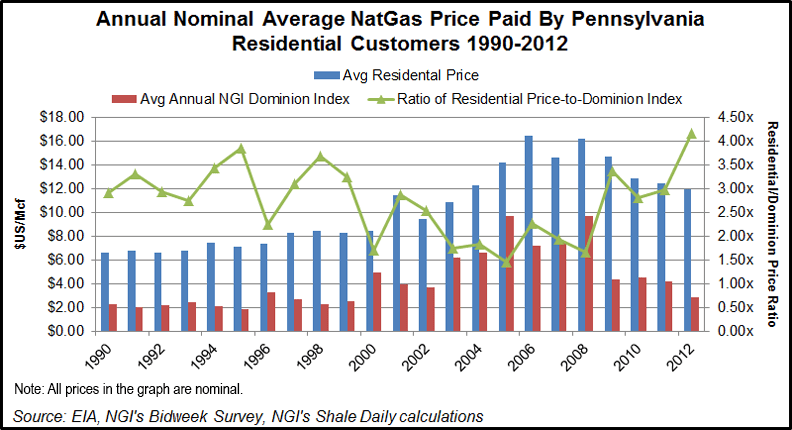 SB 738 (the Natural Gas Consumer Access Act) and SB 739 call on the state government to assist with the extension of natural gas distribution lines to customers that are either not currently being served or are under-served by utilities (see Shale Daily, April 8).

SB 738 was approved by the Senate in a 46-2 vote Wednesday; SB 739 was approved by a 38-12 vote Tuesday and has been referred to the House Environmental Resources and Energy committee. The bills were introduced earlier this year by Senate Majority Leader Dominic Pileggi (R-Chester) and Sen. Gene Yaw (R-Lycoming).

“The impetus for these bills started in Bradford County about two years ago,” Yaw said following the Senate vote Wednesday. “The Center for Rural Pennsylvania held a hearing and during the course of that hearing it became apparent that a significant part of Pennsylvania was not served by natural gas, although we’re sitting on one of the largest deposits of natural gas in the world. These bills will provide the opportunity for residents to obtain gas service should they choose that source of energy.”

“Having abundance of affordable natural gas in the Marcellus Shale formation gives Pennsylvania a unique opportunity to cut costs for homeowners and to encourage economic growth across the state,” Pileggi said. “These bills make smart investments to allow us to take advantage of this new energy supply.”

SB 738 would require every natural gas distribution utility operating in the state to submit a three-year plan to the Pennsylvania Public Utility Commission (PUC). The plan would outline each utility’s strategy for extending and expanding natural gas lines.

The first three-year plan would be due to the PUC on Jan. 1, 2014, with additional plans required every two years after that. SB 738 would empower the PUC to approve, reject or revise the plans, but the commission could also order a utility to submit a revised plan. The PUC would also have the power to conduct periodic reviews.

SB 738 would also create a system to expedite expansion or extension projects if there are large numbers of residential, commercial or industrial customers who want service, or if an economic development corporation wants service for a project that would create 30 or more jobs.

SB 739 would amend the state’s Alternative Energy Investment Act and provide $20 million in grant money so schools, hospitals and small businesses can be serviced by natural gas. The grants, issued through the Commonwealth Financing Authority (CFA), could pay for up to half of the expansion or extension projects. The CFA would give priority to applications that will result in adjoining commercial or residential properties utilizing natural gas.