The Organization of the Petroleum Exporting Countries and its allies, aka OPEC-plus, scrapped plans to restart production talks this week after meetings held before the July 4 holiday failed to reach a deal on output policy. 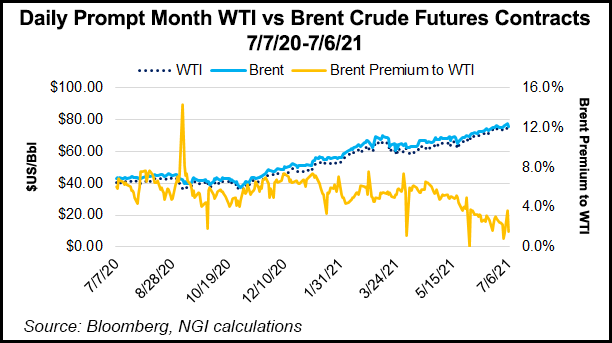 The cartel did not set a date to resume talks, leaving the group with no plan for increased production beyond July. It has put global oil markets in a state of uncertainty as demand mounts and prices climb.

Saudi Arabia-led OPEC and an allied group of leading producers headed by Russia last week discussed whether to raise output by about 400,000 b/d each month from August to December. Details were initially expected to be finalized before the U.S. holiday, but talks broke down amid objections from OPEC member the United Arab Emirates (UAE).

The UAE, OPEC’s third-largest producer in 2020, said it had tabled one-third of its output as part of previous cartel production cuts – more than other members. It argued that it should now be allowed to raise output more than others to compensate.

“We cannot extend the agreement or make a new agreement under the same conditions. We have the sovereign right to negotiate that,” UAE Energy Minister Suhail Al Mazrouei said in a televised interview over the weekend.

Other OPEC members and their partners did not agree and the group failed to broker a deal.

The production meeting “has been called off,” OPEC Secretary General Mohammad Sanusi Barkindo said on the group’s website over the weekend. “The date of the next meeting will be decided in due course.”

“Discussions reportedly remain underway” via unofficial channels, Tudor, Pickering, Holt & Co. analysts said Tuesday. Those discussions  “could give way to a compromise on supply additions ahead of month’s end for August amidst an expectedly tight market.” However, “both sides appear fairly far apart, further bolstering the potential for a short-term spike in price.”

The cartel is currently adding more than 2 million b/d into the global market, a process started in May and scheduled to carry through July. Increases by the group since oil demand started to recover last summer will total about 4 million b/d at the end of July.

However, without further production bumps after July, OPEC researchers said last week demand could exceed supply by 1.5 million b/d in August and widen further to 2.2 million b/d before the end of 2021. They based this on accelerating economic activity and travel across Europe, North America and Asia as vaccination programs prove effective, economic activity mounts and demand for travel fuels rebounds.

U.S. producers, meanwhile, under pressure to contain costs and return capital to shareholders, also are holding the line on output. Domestic production held flat at 11.1 million b/d in the week ended June 25 – the latest for which data are available — according to the Energy Information Administration.

U.S. output remained 2.0 million b/d below the 2020 peak of 13.1 million b/d reached in March before the pandemic’s fallout.

Meanwhile, Brent crude prices, the international benchmark, topped $76/bbl in intraday trading last week – the highest level since prior to the pandemic, and up nearly 50% this year – as demand looks likely to exceed supply through 2021. OPEC expects global oil demand to increase by about 6 million b/d in the second half of this year.

“For now, crude oil prices of $75/bbl suggest the latest (OPEC-plus) maneuvering is in line with expectations, but perhaps the most surprising takeaway is just how precious oil supplies are becoming,” Evercore ISI analysts said.