The Organization of the Petroleum Exporting Countries and its allies, aka OPEC-plus, debated on Thursday a proposal to further boost crude oil production, anticipating steadily increasing demand for travel fuels in the second half of 2021. 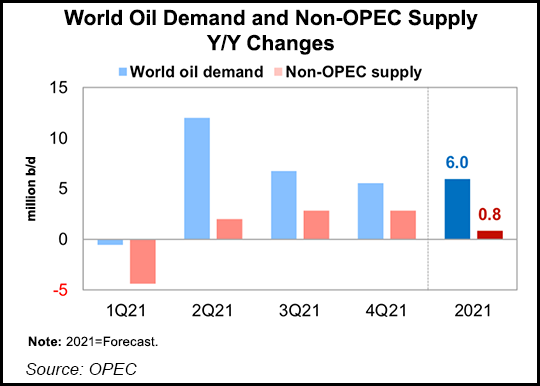 Citing successful vaccination efforts and economic momentum in leading countries such as the United States and China, the Saudi Arabia-led cartel and an allied group of leading producers headed by Russia discussed whether to raise output by about 400,000 b/d each month from August to December. Details were likely to be finalized Friday, according to multiple news outlets.

Crude consumption is “moving in the right direction,” with a projected “strong rebound of oil demand in the second half of the year, putting us within striking distance of pre-pandemic levels in the fourth quarter,” OPEC conference president Diamantino Pedro Azevedo said.

OPEC-plus said any output plan could be adjusted in coming months if coronavirus outbreaks resurge and disrupt demand.

“The coronavirus continues to take a painful toll, with thousands of lives still being lost every day,” Azevedo said. “The presence of the new Delta variant and the recent surge in case numbers in India, along with other Asian countries, Latin America, the United Kingdom and most recently Russia and Africa, are a grim reminder of the uncertainties that still loom over us.”

Delegates also noted that, if ongoing discussions lead to the United States easing Iranian economic sanctions, Iran could add more than 1.0 million b/d of oil back into global supply. This was another reason the cartel focused on modest increases.

“What OPEC-plus doesn’t want is to get too far ahead of the curve and release too much supply too soon and have to backtrack and shut in production,” said Rystad Energy analyst Louise Dickson.

A new OPEC-plus output bump would follow a production increase effort already underway. The cartel is currently adding more than 2 million b/d into the global market, a process started in May and scheduled to carry through July.

Brent crude prices, the international benchmark, topped $76/bbl in intraday trading Thursday – its highest level since prior to the pandemic.

OPEC-plus slashed output by 9.7 million b/d early last year after the pandemic rattled oil markets and paralyzed demand. Cartel additions made since oil demand started to recover last summer will total about 4 million b/d at the end of July.

Absent further production increases after July, OPEC researchers said earlier this week  demand could exceed supply by 1.5 million b/d in August and widen further to 2.2 million b/d before the end of 2021. They based the forecast on accelerating economic activity and travel across Europe, North America and Asia. This notably includes the world’s two largest economies, the United States and China.

Lower 48 oil and natural gas producers, under pressure to contain costs and return capital to shareholders, are holding the line on output, giving OPEC and its allies added reason to take the lead.

With production flat and demand up, U.S. oil inventories dropped by 6.7 million bbl during the June 25 week, EIA’s WSPR showed. That followed a 7.6 million bbl drop the prior week. The figures do not include supplies in the Strategic Petroleum Reserve.

At 452.3 million bbl, U.S. stockpiles are about 6% below the five-year averaged and are at the lowest level since prior to the pandemic.