Russia, Saudi Arabia and other top oil producing countries plan to keep pumping more crude into early 2022, despite worries about the coronavirus Omicron variant and the potential for easing demand. 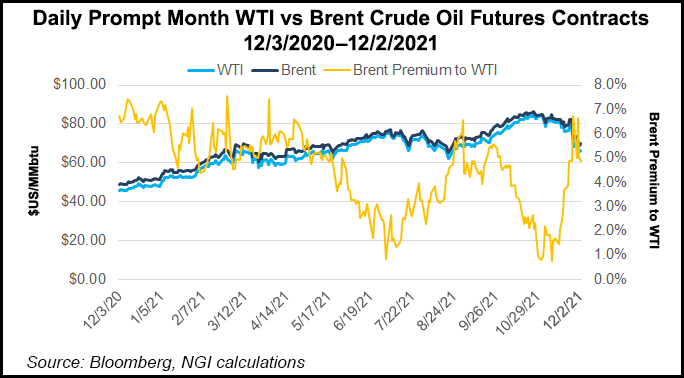 The Saudi-led Organization of the Petroleum Exporting Countries (OPEC) and its Russia-led allies, collectively known as OPEC-plus, said Thursday they would boost production by 400,000 b/d in January, continuing a pace of monthly supply increases the cartel began in August.

OPEC researchers have said that, amid a global economic rebound in 2021 from the pandemic-imposed recession a year earlier, demand for oil has steadily climbed and the increased output is needed to balance the market in the first half of next year.

Global oil prices, however, have retreated more than 20% since late October. Pressure emerged amid recent global efforts to lift supply and worries about a winter resurgence of the virus that could necessitate new travel restrictions and dampen oil demand.

Those concerns were compounded last week when the new variant was confirmed in South Africa. It has since been detected in more than a dozen other countries, with the United States reporting its first Omicron cases this week, one in California and another in Minnesota.

Rystad Energy analyst Louise Dickson called the new variant “a clear bearish monster at the gates” that “has sobered up markets during the last few days, halting the oil demand recovery enthusiasm and sending traders scrambling to limit risk in their portfolios.”

Countries in Europe, Asia and elsewhere were planning new restrictions to combat Omicron. President Biden said Thursday international travelers to the United States would need to be tested for the virus within one day of departure, even if vaccinated, rather than the 72 hours currently required.

Against that backdrop, markets had anticipated that OPEC-plus could pause production increases to buy time and more thoroughly assess the new variant’s likely impacts.

All of that noted, Dickson said the cartel sent a message that its supply policy “is not subject to volatile news flow and external pressure to reduce output.”

Goldman Sachs Group analysts said this week that, based on the effects of Delta and earlier variants, lasting restrictions and widespread demand drops are unlikely, supporting the case for continued OPEC-plus supply increases.

“The market has far overshot the likely impact of the latest variant on oil demand,” the Goldman team said in a report.

Others, however, anticipate the cartel will pull back on production early next year.

OPEC-plus has predicted that world oil consumption would grow by 5.8 million b/d in 2021 and another 4.2 million b/d next year, reaching an average of about 100 million b/d. That would put demand on par with 2019 levels.

The cartel’s 400,000 b/d pace of output increases would balance supply with that expected demand in the first half of 2022, it has said, barring new demand challenges or increased oil production by the United States or other countries outside OPEC-plus.

In November, however, Biden said his administration would release 50 million bbl of crude from the Strategic Petroleum Reserve in a coordinated effort with China, Japan, India and other countries to bolster global supplies. What’s more, U.S. production for the week ended Nov. 26 reached 11.6 million b/d, the highest level of 2021.

“We expect OPEC-plus to pivot from increasing to decreasing production targets” to “avoid a significant level of oversupply in the global oil market,” ClearView Energy Partners LLC analysts said.

OPEC-plus is scheduled to meet next on Jan. 4.