U.S. producers have played a critically important role in rebalancing the global oil market after Covid-19 and will continue to do so going forward, according to Organization of the Petroleum Exporting Countries (OPEC) Secretary General Mohammad Sanusi Barkindo. 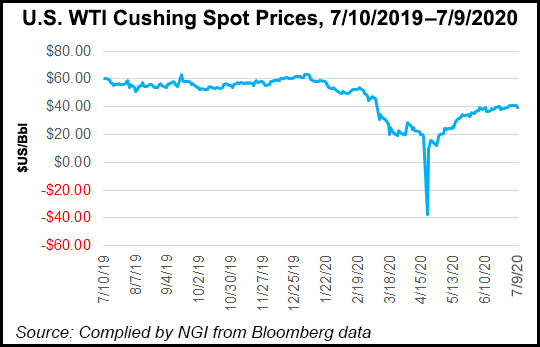 Although tensions have long simmered between the Saudi-led cartel and the Lower 48 onshore segment, “there is no objective whatsoever from us as a group or as individual countries to drive U.S. shale production out of business,” Barkindo said in an interview with IHS Markit’s Carlos Pascual, senior vice-president.

U.S. operators took a different view in March when a price war between Saudi Arabia and Russia flooded the market with crude just as the coronavirus was beginning to ravage global demand, driving oil prices below the breakeven point for many North American operators.

However, in response to the unprecedented demand collapse, OPEC and its allies, aka OPEC-plus, in April pledged to collectively curtail supply by 9.7 million b/d during May and June, and then agreed to maintain cuts of 9.6 million b/d in July.

Although the United States was not a signatory to the agreement, Barkindo said that U.S. and other Group of 20 leaders nonetheless helped ensure that a deal was reached. “Their intervention saved the situation,” Barkindo said, stressing the difficulties of reaching consensus between 24 producing countries to slash output.

On the industry side, meanwhile, “We were able to reach out to the U.S. independents and we had established a line of communication with them.”

He added, “Without the U.S. shale probably, we could have entered into a worse crisis than we are seeing in this pandemic.”

Although production cuts in the U.S. were never mandated at the federal or state levels, the massive supply overhang drove U.S. producers to swiftly curtail supply nonetheless.

Operators have since started bringing production back online amid a partial recovery in prices and demand.

In a note to clients on Friday, Raymond James & Associates Inc. analysts highlighted that a 4.6 million barrel build of crude oil, gasoline and distillates into storage for the week ended July 3, a bearish figure relative to the consensus prediction of a 3.2 million-barrel draw.

Looking ahead, Barkindo said, “This pandemic has proven beyond a reasonable doubt that we need to revisit the governance architecture of energy, climate change and possibly geopolitics,” highlighting the need for coordination between all producing countries.

“Sometimes I speak more in a day with the non-OPEC countries than OPEC member countries,” he said, adding, “We have also seen as a result of this pandemic now we are even going out to countries beyond the OPEC-plus and we are now talking about a new governance structure possibly going forward.”