After curtailing output by 70% in May in response to a pandemic-driven market downturn, Continental Resources Inc. said Thursday it would bring some production back in July, although about 50% of output is to remain offline. 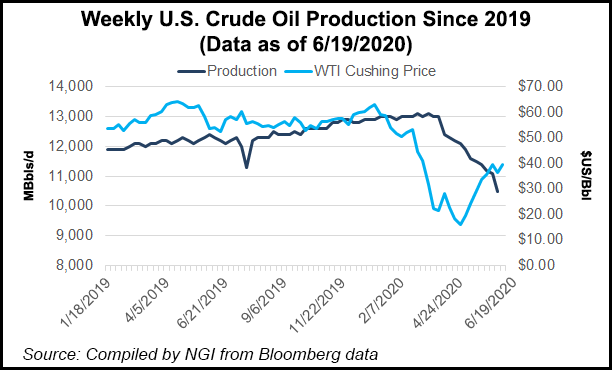 “Continental elected to defer production in order to preserve shareholder value over volumes, and maximize the economics of the barrels we produce,” said CEO Bill Berry.

“As oil prices have stabilized and begun to recover, we have partially resumed production. As improved supply and demand fundamentals benefit oil prices, we expect to continue restoring production in subsequent months.”

However, since U.S. oil prices briefly plunged negative in April, they have come roaring back through a combination of coordinated, high-compliance supply cuts by the Organization of the Petroleum Exporting Countries and its allies (OPEC-plus) for May and June that were extended through July, sharp voluntary cuts by North American operators like Continental and an uptick in global petroleum demand as virus containment measures are eased.

Near midday Friday, the West Texas Intermediate (WTI) futures contract was trading at $40.11/bbl, up $1.27 from Thursday’s settle, following news that OPEC-plus member countries that failed to fully achieve their committed supply cuts in May and June will compensate the shortfall during July, August and September.

OPEC’s Joint Ministerial Monitoring Committee said Thursday Iraq and Kazakhstan already have submitted their compensation schedules, and that other underperforming producer countries would be given until Monday (June 22) to do the same.

On May 11, when Continental announced the 70% curtailment, the WTI spot price at the Cushing hub in Oklahoma averaged $24.02.

In a Thursday note to clients, analysts at Raymond James & Associates Inc. led by John Freeman said they were surprised at the magnitude and duration of Continental’s supply cuts given the recovery in strip pricing, citing the producer’s expected 2Q2020 production figure is about 12% below analyst consensus.

As a result, Freeman and his team “are modeling a conservative resumption of the curtailed volumes going forward.”