Oil prices rallied this week as traders absorbed new – and elevated – forecasts for 2021 amid signs that U.S. inventories could trail rising demand as the year unfolds. 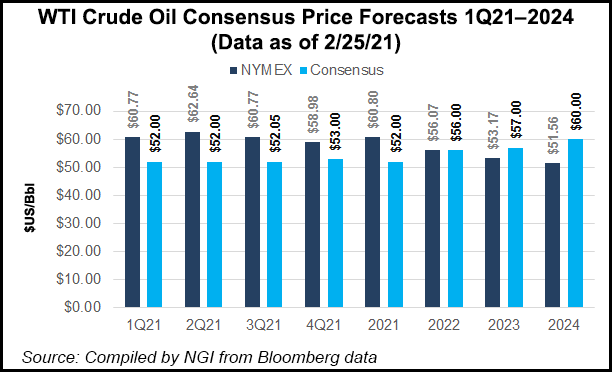 Key oil benchmarks traded near 13-month highs this week, with West Texas Intermediate (WTI) crude surpassing $63/bbl on Thursday and Brent crude hovering around $67. WTI prices descended into negative territory last April amid the immediate fallout of the coronavirus pandemic. They gradually recovered over the rest of the year and reached $48 at the close of 2020. Prices have since steadily climbed.

With coronavirus vaccine distribution programs underway across North America, Asia and Europe, meanwhile, analysts anticipate a rebound in travel beginning as soon as this summer, one that would drive up demand for gasoline and jet fuels derived from crude.

“Restrained oil supply worldwide will support positive momentum for oil prices through at least 2021,” analysts at Moody’s Investors Service said Thursday. “A recovery in oil production will lag increases in demand and will accelerate a rebalancing of the physical markets.”

The Moody´s analysts said they now assume that average Brent crude prices in 2021 will move toward the middle of their medium-term oil price range of $45-65, though they anticipate “high volatility” as demand increases in stages around the world alongside an uneven pace of vaccinations by country.

Additionally, while U.S. crude production had started to climb this year in response to recovering prices, last week it plunged 1.1 million b/d from the prior week to average 9.7 million b/d. That was down 3.3 million b/d from a year earlier, driven largely by power outages and frozen well operations caused by the Arctic blast that sent Texas and parts of neighboring states into an energy crisis.

At the same time, the Organization of the Petroleum Exporting Countries (OPEC) and its allies, aka OPEC-plus, is keeping its output in check through the first quarter, with leader Saudi Arabia saying it would cut production by 1.0 million b/d this month. Most other members of the cartel agreed to keep output flat during that span.

Against that backdrop, Barclays analysts on Thursday lifted their 2021 oil price forecast, saying in a report Thursday that a “subdued” response on the production side to the price recovery would support continued momentum this year.

The analysts boosted their Brent crude oil price outlook by $7 to $62 and their WTI crude estimate by $6 to $58.

“Colder-than-normal weather, especially in the southern states, has accelerated the normalization in inventories by disrupting output more than demand,” the Barclays analysts said.

BofA Global Research analysts, meanwhile, said Thursday they increased their average Brent crude price forecast to $60 for 2021, up from a previous forecast of $50. “We also believe prices could temporarily spike to $70/bbl.”

Expectations for mounting demand also are helping to fuel optimism.