Crude oil production in the United States plummeted but so too did demand amid last week’s bitter freeze that caused an energy crisis in Texas. Stockpiles ticked up as a result, the Energy Information Administration (EIA) said in its latest Weekly Petroleum Status Report (WPSR) on Wednesday. 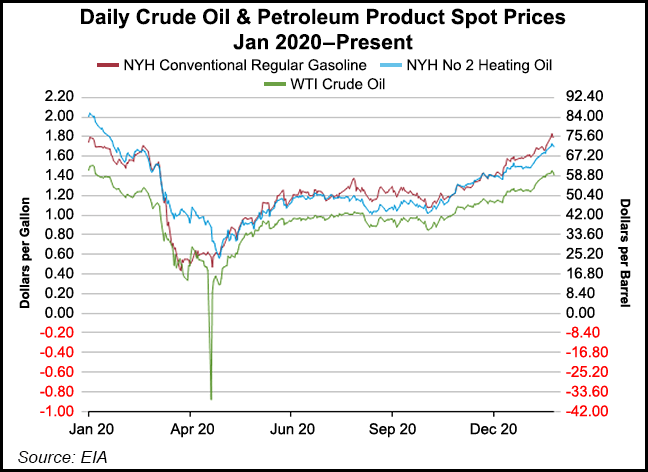 U.S. commercial crude inventories for the week ended Feb. 19, excluding those in the Strategic Petroleum Reserve (SPR), increased by 1.3 million bbl from the previous week. At 463.0 million bbl, stocks were on par with the five-year average for the comparable week, the agency said.

Drops in jet fuel consumption (down 32%) and gasoline (down 20%) helped to propel the year/year decline, as they have most weeks since the onset of the coronavirus pandemic. With travel limited to slow the spread of the virus, demand for transportation fuels derived from oil has consistently proven soft.

Still, the relative decline in gasoline demand was steeper than most weeks, a reflection of the frozen roads across much of the central and southern United States and millions of stranded Texans last week.

Power outages also contributed to a 21% year/year drop in propane and propylene consumption. A week earlier, demand for the fuels, used for heating, increased 14%.

EIA said U.S. crude production, meanwhile, averaged 9.7 million b/d, a decrease of 1.1 million b/d from the prior week and down 3.3 million b/d from a year earlier – largely because of power outages and frozen well operations.

U.S. refinery inputs averaged 12.2 million b/d during the latest covered week, down 2.6 million b/d from the previous week’s average. Refineries operated at 68.6% of their operable capacity last week, down from 83.1% the prior week, the agency reported.

Analysts at ClearView Energy Partner LLC said the latest WSPR results mirror “the impact of the recent severe winter storm on both U.S. supply and demand” and are not indicative of developing 2021 trends.

Anticipating successful rollouts of vaccines this spring, Raymond James & Associates Inc. analysts said demand for transportation fuels could rebound later this year if the pandemic’s impacts recede. Already, the analysts said, “there is noticeable economic reopening in February, and we expect more of that in March” across North America, Europe and Asia.