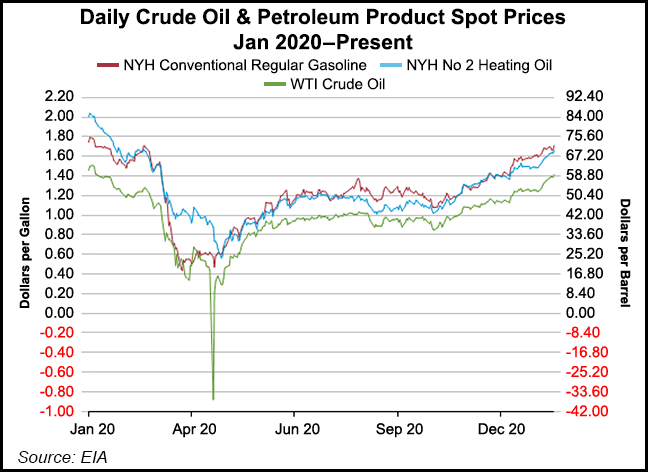 Analysts said the surge in frigid weather that blasted the nation’s midsection this week and upended daily life in Texas – where energy infrastructure was not designed to withstand prolonged periods of freezing conditions – is bound to lead to EIA reporting another withdrawal in its next report.

Icy roads were limiting travel and curbing demand for gasoline in Texas and neighboring states, and refinery outages were hindering crude demand. But production was estimated to be down 40% at midweek due to power outages and frozen well operations, likely enough to require another pull to meet national demand.

The deep freeze “has impacted operations across the oil and gas value chain,” said analysts at ClearView Energy Partners LLC.

At 461.8 million bbl, U.S. crude oil inventories are now at the five-year average for this time of year, according to the latest WPSR, after hovering above recent historic norms for months.

Total commercial petroleum inventories decreased by 15.1 million bbl last week and reached the lowest level since last April. One participant on Enelyst, the online chat hosted by The Desk, called it a “monster pull” and noted it likely preceded more to come in February.

Drivers of the year/year demand increase were distillate fuels consumption, up 19%, and propane and propylene use, up 14%.

U.S. crude production for the latest covered week, meanwhile, averaged 10.8 million b/d, down 200,000 b/d from a week earlier and down 2.2 million b/d from a year earlier.

Domestic production levels have been choppy in recent weeks, but forecasters generally expect the United States and other producers outside of the Organization of the Petroleum Exporting Countries (OPEC) to increase output this year when compared to 2020.

Researchers cite expectations for vaccines to reach enough people by the summer to ward off coronavirus outbreaks and open doors for more travel and a greater global demand for transportation fuels.

OPEC this month forecasted that global oil demand would rise by 5.8 million b/d to average 96.1 million b/d this year. While too early to predict its own growth along with that of its allies (OPEC-plus) because leader Saudi Arabia cut production this month, the cartel estimated non-OPEC-plus supply would expand by 700,000 b/d this year to average 63.3 million b/d.