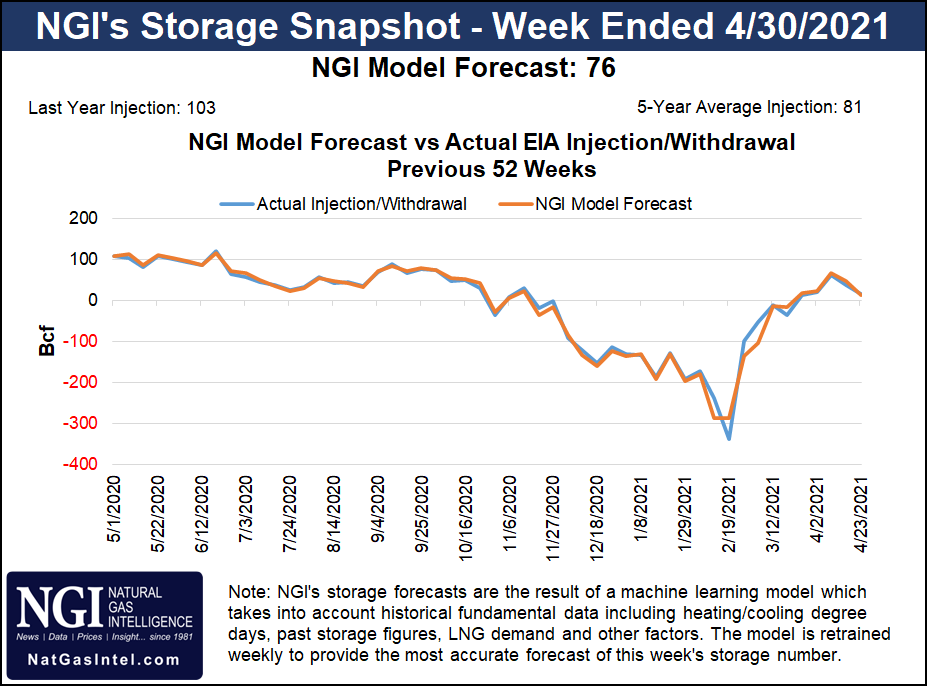 “Cooling into the eastern half of the nation later this week gives HDDs a boost for a few days, but the pattern is projected to turn warmer as we move to the middle of the month, lifting CDD totals somewhat,” Bespoke said. “We feel the warmer tilt to the pattern will continue in the back half of May, increasing the odds of more meaningful cooling demand showing up in many locations.”

The forecaster also noted other developments favorable for gas futures. Notably, production was down slightly from last week and power burns ticked up to start the month of May.

On the storage front, Bespoke’s preliminary estimate for Thursday’s Energy Information Administration (EIA) report is for a 69 Bcf injection, below average for this time of year. That would “reflect supply/demand balances that are tight enough to continue supporting the market.”

The market “may want to test that $3.00 level in prompt-month pricing this week,” given “continued strength in the data,” Bespoke said.

NGI’s model predicted a 76 Bcf injection for the week ended April 30. That would compare with a 103 Bcf build recorded in the comparable week of 2020 and a five-year average injection of 81 Bcf.

“If weather forecasts start to call for significant early-season air-conditioning demand along the southern tier of the country” in May, “the injection season contracts could quickly rise by 5-10%,” EBW Analytics Group said Monday. “If hotter-than-normal weather arises this summer, it could amplify structurally bullish weather-normalized fundamentals to drive outsized gains for natural gas.”

Additionally, an “undersupplied global LNG market,” largely because late-season cold and a need to replenish storage inventories in Europe and Asia, and “an improving pandemic picture and economic boom” could keep overall demand solid through the summer and potentially leave storage levels light later this year, EBW said.

Meanwhile, nearly one-third of all Americans are now fully vaccinated against the coronavirus, creating a light at the end of the pandemic tunnel and allowing more states to fully reopen their economies.

“This strong economic growth is filtering into exceptional” first quarter earnings, said Raymond James & Associates Inc.’s Mike Gibbs, a managing director. Among the roughly 40% of S&P 500 companies to report through last week, 86% beat analysts’ expectations on the bottom line by an aggregate 23.9%, he said, “which would be the highest earnings surprise on record if sustained.”

Strong commercial and industrial demand, in addition to residential cooling needs this summer, would add to the potential for relatively low stockpiles of underground natural gas later this year.

Tudor, Pickering, Holt & Co.’s (TPH) latest end-of-season storage estimate shows inventories peaking at 3.5 Tcf, or 7% below the five-year average. This could result in an estimated 2 Bcf/d undersupply and trim storage to 1.2 Tcf by the end of next winter.

“We view this as a tenuous level,” the TPH analysts said. “As such, we see summer 2021 pricing needing to push an incremental 25 cents higher to shave another 1 Bcf/d off power generation and allow an additional 200 Bcf or so to flow into storage.”

Last week, EIA reported a 15 Bcf injection for the week ended April 23, well below historical injections. U.S. inventories stood at 1,898 Bcf, which was 302 Bcf lower than a year earlier and 40 Bcf below the five-year average, according to EIA.

Spot gas prices opened the week on a high note ahead of anticipated rounds of unseasonably cool air.

Colder-than-normal weather systems with showers and thunderstorms were forecast to sweep across much of the nation’s midsection by Tuesday and then move to the Northeast by midweek, NatGasWeather said. Areas of the Midwest, Great Lakes and New England could see lows in the 30s and 40s.

“Cooling will also push into Texas and the South/Southeast at times” this week, NatGastWeather said. “The West will be mild to very warm with highs of 60s to 90s, hottest Southwest and coolest Northwest.

“Essentially, gained demand over the northern U.S. will be partially offset by weaker demand over the southern U.S.,” the firm added. However, “reinforcing cool shots are expected across the Plains, Midwest and Great Lakes late in the week…for continued late-season heating needs.” A “warm-enough” pattern across southern regions is expected next week to drive cooling demand, with highs of 80s to 90s.

Maintenance season, meanwhile, continues to progress with more projects announced for this week.

The Smithfield Mobley gas processing plant is set to be completely shut in for the duration of the maintenance, he said. Over the past 30 days, the plant has averaged 201 MMcf/d.

Rockies Express Pipeline (REX) scheduled pipeline work in two locations that could limit up to 261 MMcf/d of westbound flow in Indiana and Ohio from Tuesday through May 10, Ferrara said.