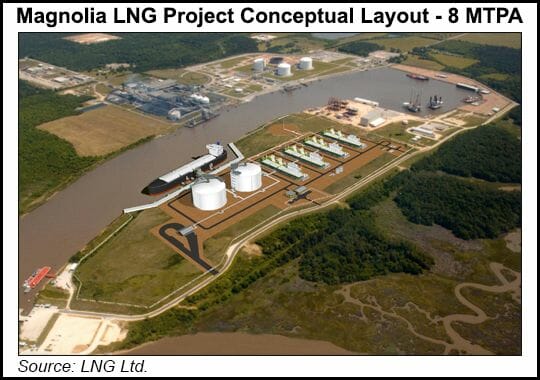 Glenfarne earlier this month closed on the acquisition of the 8.8 million metric tons/year (mmty) Magnolia LNG export project near Lake Charles, LA, from Australia’s Liquefied Natural Gas Ltd. The $2 million deal for the Magnolia project was completed after two potential deals with other parties fell through.

Glenfarne is also the majority owner of the 4 mmty Texas LNG project in Brownsville, TX. Glenfarne’s midstream infrastructure division, Alder Midstream LLC, owns the stakes in both LNG projects. Alder is focused on building, owning and operating midstream assets in the Americas.

Glenfarne for now is not prioritizing either LNG project over the other, Duval said Friday.

“At this stage, our priority is to continue investing in both Texas LNG and Magnolia LNG to help both projects reach final investment decision (FID), and then to continue on with construction and operation,” he said.

Both projects have received construction authorization from FERC, but have not finalized long-term, take-or-pay customer deals that would be necessary to get financing.

Low LNG prices caused by the Covid-19 pandemic and an oversupplied global market have made it very difficult for U.S. LNG projects to finalize offtake deals, causing a number of projects to sustain delays and some to be shelved.

Texas LNG and Magnolia LNG have the advantage of being “on the smaller side” among proposed U.S. projects, “and that opens up a broad array of potential offtakers as more buyers seek to diversify their supplier portfolios,” Duval said.

Texas LNG previously said it could come on line with a first phase of 2 mmty and Magnolia LNG’s previous owner said it would need to sell 6 mmty of offtake to fund that project. However, Duval declined to say how much offtake each project would need to sell to get funded.

Texas LNG has the additional advantage of “a signed partnership with Samsung, offering access to the Korean market, where there is substantial opportunity,” Duval said.

“Magnolia LNG is a mature project with its FERC permitting, and Alder saw the opportunity to help it get through its next several stages given the construction and operation expertise we bring to bear,” he said.

Duval declined to say how much Glenfarne paid for its majority stake in Texas LNG, which has an estimated cost of $3.5 billion, but a lump-sum turnkey contract for engineering, procurement and construction (EPC) is still being negotiated.

Magnolia LNG previously contracted with KBR Inc. for a lump-sum turnkey EPC contract for $4.623 billion, but KBR recently said it would exit the energy business to expand its core government and technology businesses. That will leave Magnolia and a handful of other North American LNG projects that had deals with KBR to seek new construction contracts.

Glenfarne said it has received interest from other engineering firms to build Magnolia LNG and it is confident it will find another contractor “at an industry leading, cost-competitive rate.”

Duval said “we believe both projects will be among the lowest cost of any of the yet to be constructed U.S. LNG export facilities.”

Glenfarne is collaborating with potential customers to develop contracting models for each project “that are sustainable long-term,” he said.

Glenfarne created Alder in 2019 because it saw opportunities to improve its existing gas infrastructure assets, as it expects cleaner-burning natural gas to account for nearly half of new energy consumption in the next several decades.

“The creation of Alder is also a natural extension of our business following the growth of EnfraGen, our power platform,” Duval said. “Through our experience of building the portfolio of back-up power and thermal plants, we know how the end user of LNG runs their business.”