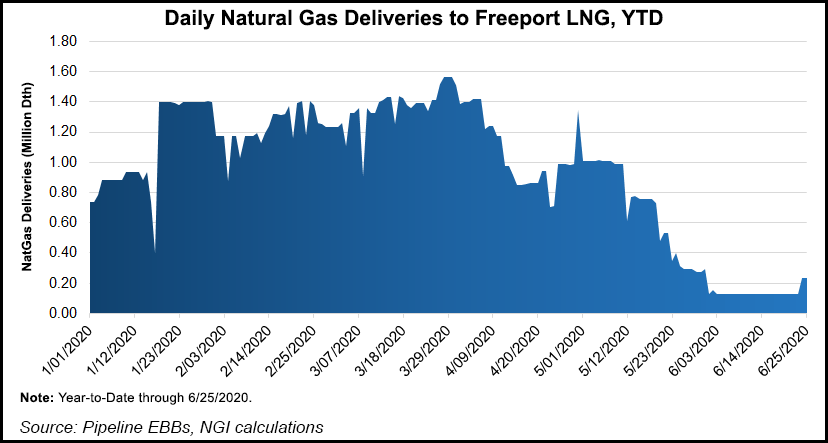 In an investor presentation earlier this month, CEO Stuart Bradie said the decision to exit “the blue-collar construction and lump-sum EPC areas within our energy business” marked another step in the company’s transformation. Since 2015, KBR has increased earnings from its government business to 85% from 11%.

More details are to be provided during the second quarter earnings call next month.

Freeport LNG had secured KBR last year to build the fourth production unit at its export terminal on Quintana Island, TX, but it planned another competitive bidding process for the not-yet-sanctioned project when KBR made its announcement earlier this month, according to spokesperson Heather Browne.

“Given the current market conditions resulting from Covid-19, Freeport LNG does not expect to reach a final investment decision on Train 4 this year,” Browne told NGI. “Given that Train 4 is a brownfield project, we can be ready to start construction by mid-2021, if market conditions improve.”

Freeport has secured all the funding needed to move forward with the project, which would have nominal LNG production capacity of 5.1 million metric tons/year (mmty), with operations targeted for 2023. Total export capability at Freeport is to be more than 20 mmty.

KBR also had been selected to lead construction of the proposed Magnolia LNG project in Lake Charles, LA, now owned by Glenfarne Group LLC. Magnolia, planned for a 115-acre site near the Calcasieu Ship Channel, was approved by the Federal Energy Regulatory Commission in 2016. The project would include four production trains, each able to produce 2 mmty.

Pieridae Energy Ltd. also had been working to finalize its EPC agreement with KBR late last year for its proposed Goldboro LNG terminal in Nova Scotia. Sanctioning of the 10 mmty export project has been long delayed, with the project first announced in October 2012 with an initial startup set for late 2018.

Now, the pandemic has pushed back sanctioning Goldboro, with management indicating that it has come to an agreement with customer Uniper “on an adjusted FID deadline of June 2021 and first-gas deliveries between Aug. 31, 2025, and Feb. 28, 2026.”