Liquefied Natural Gas Ltd. (LNGL) has lined up yet another deal to sell some assets after a transaction with Global Energy Megatrend Ltd. fell through this week. 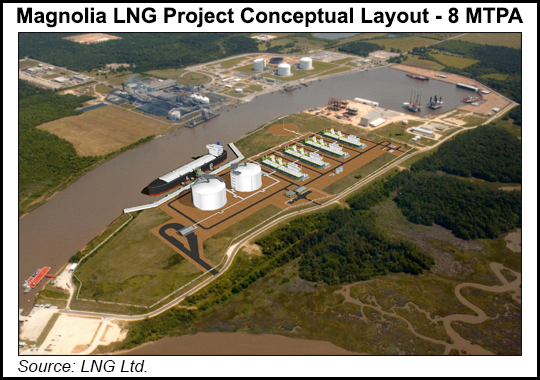 PricewaterhouseCoopers (PwC), which was hired earlier this month to review the liquefied natural gas (LNG) operator’s assets, said the company instead plans to sell for $2 million the proposed Magnolia LNG export project in Lake Charles, LA, and its patented optimized single mixed refrigerant (OSMR) liquefaction process technology to Magnolia LNG Holdings LLC. No other information was made available about the buyer.

If the export project were to move forward and a notice to proceed with construction, LNGL would earn more. The transaction also includes a recapitalization program for LNGL dependent on certain factors.

PwC said LNGL terminated a $2.25 million deal to Global Energy after Global Energy failed to close the transaction within the required timeframe. The transaction was announced about a month after LNGL warned of a cash crunch because its lender ended funding and Singapore-based LNG9 Pte Ltd. withdrew a takeover offer.

The latest deal does not include LNGL’s interest in the proposed Bear Head LNG project in Nova Scotia, which would produce for export up to 12 million metric tons/year (mmty). LNGL also has a perpetual license to use the OSMR technology at Bear Head.

Magnolia, planned for a 115-acre site near the Calcasieu Ship Channel, was approved by the Federal Energy Regulatory Commission in 2016. The project would include four production trains, each with the capability to produce 2 mmty.

LNGL signed a binding agreement with Meridian LNG Holding Corp for firm capacity rights of up to 2 mmty in 2015, and it was extended in 2016. Magnolia also said it continues to negotiate deals with potential customers for terms of 20 years. LNGL has had difficulty securing binding offtake agreements in a current global gas market.