ExxonMobil is wading into the certified natural gas game, partnering with nonprofit MiQ for natural gas produced at its Poker Lake, NM, facility in the Permian Basin. 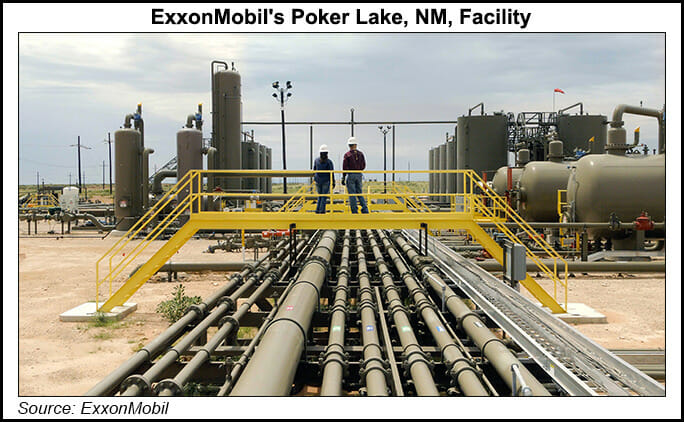 About 200 MMcf/d from Poker Lake would be assessed and certified by MiQ, ExxonMobil said Tuesday. The certified natural gas, sometimes referred to as responsibly sourced gas, could be available to customers before the end of this year, the Irving, TX-based company added.

“We are reducing methane emissions responsibly and economically, and by working with MiQ, we can provide our customers with credible third-party validation of those efforts,” said ExxonMobil’s Bart Cahir, senior vice president of Unconventional. “As we improve our operations, certifying our natural gas will help our customers achieve their goals and support a lower-carbon future.”

The company also is considering expanding certification to include other Permian fields and shale production areas, including in Appalachia and the Haynesville Shale.

Poker Lake was chosen for the certification pilot because of the “wide range of technology solutions already in place, scale advantages, proximity to nearby markets and growth potential as production in New Mexico increases,” ExxonMobil said. In addition, the company had expanded use of methane detection technologies in the region and said it was “evaluating additional next-generation applications, including satellites and artificial intelligence, as part of its ongoing initiatives to find smarter and faster ways to detect and mitigate emissions.”

The announcement comes as ExxonMobil is looking to further reduce its carbon footprint. The company already has said it plans to cut by 15-20% the greenhouse gas intensity of upstream operations in 2025 compared to 2016 levels. The cuts are to be driven by a 40-50% reduction in methane intensity and a 35-45% reduction in flaring intensity.

More than 23,000 voluntary methane leak surveys have been completed across more than 9,500 sites and all high-bleed pneumatic devices have been eliminated across ExxonMobil’s U.S. unconventional production, according to the supermajor. It also has exceeded a goal to reduce methane emissions by 15% and flaring by 25% by year-end 2020, compared to 2016 levels.

RSG is growing in the United States as domestic and global customers are making bigger efforts to reduce carbon emissions from their supply chains. But announcements so far have been dominated by independent producers, with the likes of Chesapeake Energy Corp., EQT Corp. and Southwestern Energy Inc. recently unveiling certification programs.
Elsewhere in North America, Macquarie Energy Canada Ltd. has announced plans to expand RSG distribution in the country using a virtual market.