EQT Corp. CEO Toby Rice said Thursday the largest natural gas producer in the United States is positioning itself for a “new era of sustainable shale,” further shaping its strategy to evolve into a lower carbon future. 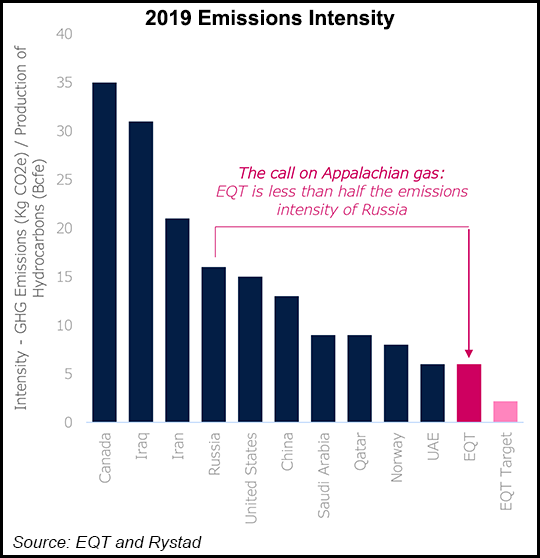 “As the largest producer of natural gas in the U.S., we’re able to forge new paths and open new markets to achieve sustainable growth,” Rice said. “This affords us the ability to pursue meaningful opportunities that smaller peers cannot.”

The board has approved $75 million to explore new venture opportunities, Rice told analysts during a call to discuss second quarter results. “This seed capital allows us to initiate several pilot programs over the next few years” aimed at further cutting emissions.

The company is aiming for net-zero Scope 1 and 2 greenhouse gas emissions by 2025. It has announced partnerships with Equitable Origin, MiQ and Project Canary to certify that about 4 Bcf/d from more than 200 wells in Pennsylvania is being responsibly produced under third-party environmental standards.

EQT’s position across the Appalachian Basin continues to grow. Rice said that can help to further reduce emissions in the Marcellus and Utica shales as the scale allows it to better execute its operational strategy.

The company plans to run a maintenance program on the assets. However, it expects total sales volumes to increase by up to 175 Bcfe this year as a result of the acquisition. The company is now guiding for up to 1.875 Tcfe of production this year. It also increased its capital expenditure guidance for the year to an estimated $1.100-1.175 billion from $1.025-1.125 billion.

While Rice said the company won’t chase short-term gains on the stronger price signals that have recently emerged, the growth aligns with a rosier outlook for the natural gas market.

“Looking forward, we expect 2021 and 2022 forward natural gas price curves to remain very sensitive to weather,” Khani said. “We see significant upside to the 2023 and 2024 curve from rising exports and increasing power demand for accelerating coal and modest nuclear retirements.”

The executive team faced questions over its hedging strategy this week. The stock price fell in Thursday trading. U.S. gas prices have charged higher in recent weeks, but EQT has only 70% of its 2022 volumes hedged at a floor price of $2.80/MMBtu. The prompt month Henry Hub benchmark was again trading above $4.00 on Thursday as the contract was further down the curve through early next year.

Moreover, 50% of EQT’s volumes are exposed to local Appalachian pricing for the remainder of the year. Northeast basis has widened considerably this summer because of curtailments on several pipeline systems. As a result, management increased differential guidance for the year. Still, exposure to local pricing is expected to vastly improve if the Mountain Valley Pipeline comes online next year as scheduled.

“With our open positions and collars, we will participate in the upside, while providing the appropriate level of protection to achieve our strategic goals,” Khani said. He added that the hedge position will keep the leverage ratio at a level that allows it to retire debt, provide returns to shareholders and allow more hedging flexibility in 2023 and beyond.

EQT produced 421 Bcfe during the second quarter, up from 415 Bcfe in the year-ago period when it made price-related curtailments. Volumes also increased from the acquisition of Chevron Corp.’s Appalachian assets last year.

Well costs also crept up to $710/lateral foot during 2Q2021 from $635 in the first quarter. The increase was attributed to longer laterals rather than service cost inflation. Through the first half of the year, well costs were $670/lateral foot, or below the $675 target for the year.

EQT reported a net loss of $936 million (minus $3.35/share), compared with a year-ago net loss of $263 million (minus $1.03). The 2Q2021 result stemmed from a $1.3 billion loss on derivatives not designated as hedges. The fair market value of EQT’s swaps and options decreased as forward prices jumped during the period.

Average realized prices during the second quarter were $2.37/Mcfe, up slightly from $2.36/Mcfe in the year-ago period.