With natural gas and liquids prices soaring, along with ethane demand, ExxonMobil hit on all cylinders during 2Q2021. 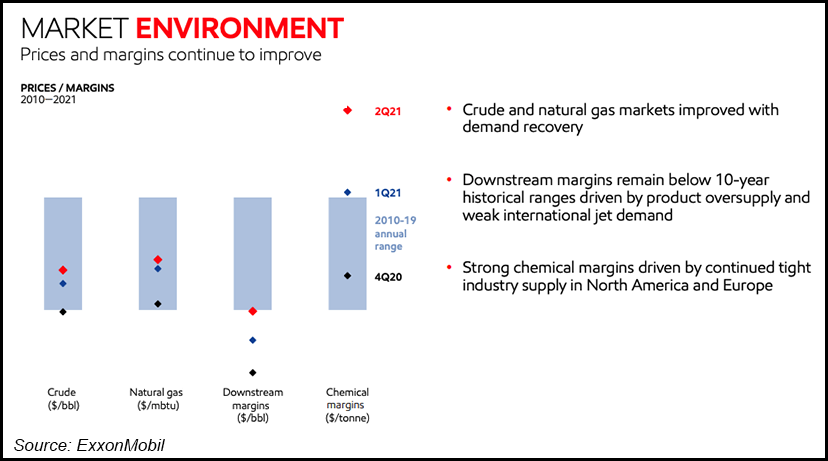 The supermajor unveiled its quarterly report on Friday, offering investors some encouraging news following a volatile run over the past few quarters. The gains were keyed to higher commodity prices and a stellar performance by the Chemicals unit.

“Positive momentum continued during the second quarter across all of our businesses as the global economic recovery increased demand for our products,” CEO Darren Woods said.

“We’re realizing significant benefits from an improved cost structure, solid operating performance and low-cost-of-supply investments that, together, are generating attractive returns and strong cash flow to fund our capital program, pay the dividend and reduce debt.”

The cracker in July reached mechanical completion for a monoethylene glycol unit and two polyethylene units. The facility is sited near the busy Port of Corpus Christi, which moves oil, condensate and liquefied natural gas overseas.

To feed the cracker in part, ExxonMobil is looking to its vast Permian holdings. In the No. 1 Lower 48 play, Permian output jumped by 34% from a year ago to average 400,000 boe/d.

Beyond the Lower 48, development expertise continues in Guyana’s offshore, where the plethora of discoveries from the Stabroek Block has been ceaseless in the past couple of years.

Recent discoveries at Uaru-2, Longtail-3 and Whiptail have increased “confidence in the quality and size of the resource,” according to ExxonMobil. It now expects the offshore block to support seven to 10 floating production, storage and offloading facilities.

“Exploration, appraisal, and development drilling continues, with a total of six drillships now operating offshore Guyana,” management noted. Liza Phase 2 is on target to ramp in 2022. Payara is set to begin operations in 2024, and Yellowtail is targeted for a 2025 startup.

Worldwide liquids and natural gas production overall fell from a year ago to 3.58 million boe/d from 3.64 million boe.

Expanding methods to reduce emissions also was on the agenda during the second quarter. The Lower Carbon Solutions business extended efforts to identify opportunities and establish partnerships in carbon capture and storage (CCS), hydrogen and low-emissions fuels.

In July, memoranda of understanding were clinched to participate in the Acorn CCS project in Scotland and to potentially develop carbon dioxide (CO2) infrastructure in France.

Acorn as designed would capture and store 5-6 mmty of CO2. The CO2 collaboration in the Normandy region of France plans to use CCS technology to reduce emissions by up to 3 mmty by 2030.

During the quarter, ExxonMobil also extended an agreement with Global Clean Energy to purchase up to 5 million bbl of renewable diesel; commercial production should begin in 2022. ExxonMobil has a goal to produce more than 40,000 b/d of renewable fuels by 2025.

Even with a big batch of projects and new start ups, capital expenditures (capex) are set to remain in the “lower end” of $16-19 billion this year in part on efficiencies. Capex through the first six months totaled $7 billion.

Projects earmarked through the end of the year include the ethane cracker, as well as projects in Brazil, Guyana and the Permian.

Efficiencies helped reduce structural costs by $3 billion overall in 2020. From January through June, another $1 billion-plus in savings also was captured. Management said it’s on pace to achieve total structural cost reductions of $6 billion in 2023 relative to 2019.

Quarterly net profits jumped to almost $4.7 billion ($1.10/share) in 2Q2021, overcoming a year-ago loss of $1.1 billion (minus 26 cents). In a sign of how much the rise in commodity prices during the latest quarter helped, ExxonMobil had turned a profit of $2.7 billion (64 cents/share) in the first quarter.

Upstream efficiencies proved to be a big positive in the latest period, with the segment’s capex falling from a year ago to $2.8 billion from $3.6 billion. U.S. upstream capex declined to $925 million from $1.6 billion.

Meanwhile, chemical profits climbed to $2.3 billion from $467 million in 2Q2020. The U.S. arm accounted for more than half of the profits at nearly $1.3 billion, compared with $171 million a year earlier.