European natural gas prices on Monday finished at the lowest point since Russia invaded Ukraine on Feb. 24, as the arrival of spring and an influx of liquefied natural gas (LNG) appeared to tip the balance of a market on edge over the war. 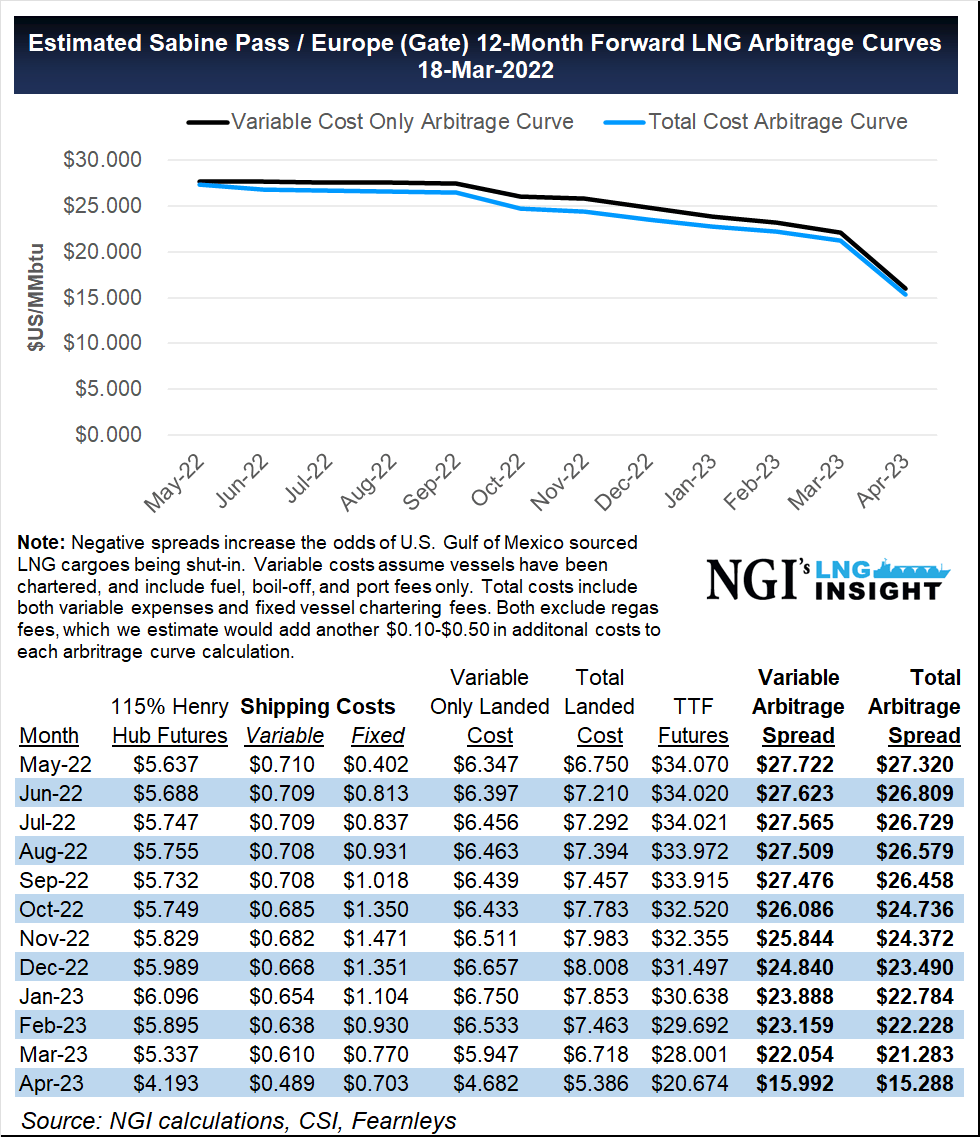 Mild weather is expected across Central and Northern Europe over the next five days, according to Maxar’s Weather Desk. Russian natural gas flows to the continent also remain strong, and a jump in imports from Norway were adding to supplies as the week got underway.

LNG deliveries are also poised to jump 71% week/week to 4.8 billion cubic meters, according to Schneider Electric. Arbitrage spreads through the remainder of the year show Europe is expected to continue edging out Asia as the premium market for Atlantic Basin LNG cargoes.

Even still, Rystad Energy analyst Kaushal Ramesh said “the situation remains as precarious as ever.” Ukraine refuses to surrender the southern port city of Mariupol as fighting has intensified and talks for a ceasefire continue.

The Title Transfer Facility fell across the curve Monday, while the prompt contract gave up about $3 to finish near $31/MMBtu. Two weeks ago, TTF finished at a record high of $72.765, when fears about whether Russia would cut gas flows to the continent or whether the west would sanction Russia’s natural gas exports dominated.

Gazprom PJSC elected not to book any additional pipeline capacity into Germany for April at a monthly auction Monday as warmer weather settles in. The company also elected not to make spot gas available on its electronic platform as it has done since November.

Longer-term, however, Europe is looking to diversify its supplies following the release of a plan earlier this month to gain independence from Russian fossil fuels by 2030. Qatar Energy (QE) said Monday that it was in negotiations with Germany to supply LNG. QE CEO Saad Sherida Al-Kaabi met with German Economy Minister Robert Habeck, who assured the company that the nation is accelerating plans for two LNG import terminals.

Meanwhile in Asia on Monday, Japan-Korea Marker spot prices were steady above $30/MMBtu amid competition with Europe and an earthquake off Fukushima, Japan, last week that shut down coal-fired power plants. The 7.4-magnitude earthquake forced some Japanese utilities to utilize more LNG-fired plants to fill the gap, necessitating additional spot purchases, according to Wood Mackenzie.

The LNG supply outlook in the region is improving. Petronas announced the startup of feed gas to its Bintulu LNG complex after problems with a production field that it’s wrestled with since last year. Shell plc’s Prelude floating LNG facility offshore Australia was also cleared by regulators to restart operations after a fire knocked out power in December.

Elsewhere in Asia, a surge in Covid-19 cases in China that has resulted in full or partial lockdowns across 10 cities in the country could limit industrial demand, Ramesh added.

Concerns over Russian supplies were also showing in the oil market on Monday as Brent crude for May delivery climbed significantly higher to an intraday high of more than $116/bbl after retreating last week. The conflict in Ukraine continues to be the biggest driver of the oil market, which is boosting LNG prices linked to Brent.

Analysts at Engie EnergyScan said Monday concerns about Russian oil flows have been compounded by Yemeni Houthi rebels who attacked oil facilities in Saudi Arabia over the weekend.

In the U.S., demand in the global LNG market continues to push feed gas deliveries to new highs. EBW Analytics Group said a new record was set Saturday when those volumes stood just below 13.8 Bcf. However, Henry Hub prices traded sideways at just under $5/MMBtu Monday amid mixed weather reports and higher domestic production.Editor’s Note: This segment is regularly available to subscribers of NGI’s LNG Insight. It covers weekly developments in the global natural gas markets and is being made available free due to escalating tensions between Russia and Ukraine. To request a trial to NGI’s LNG Insight click here.