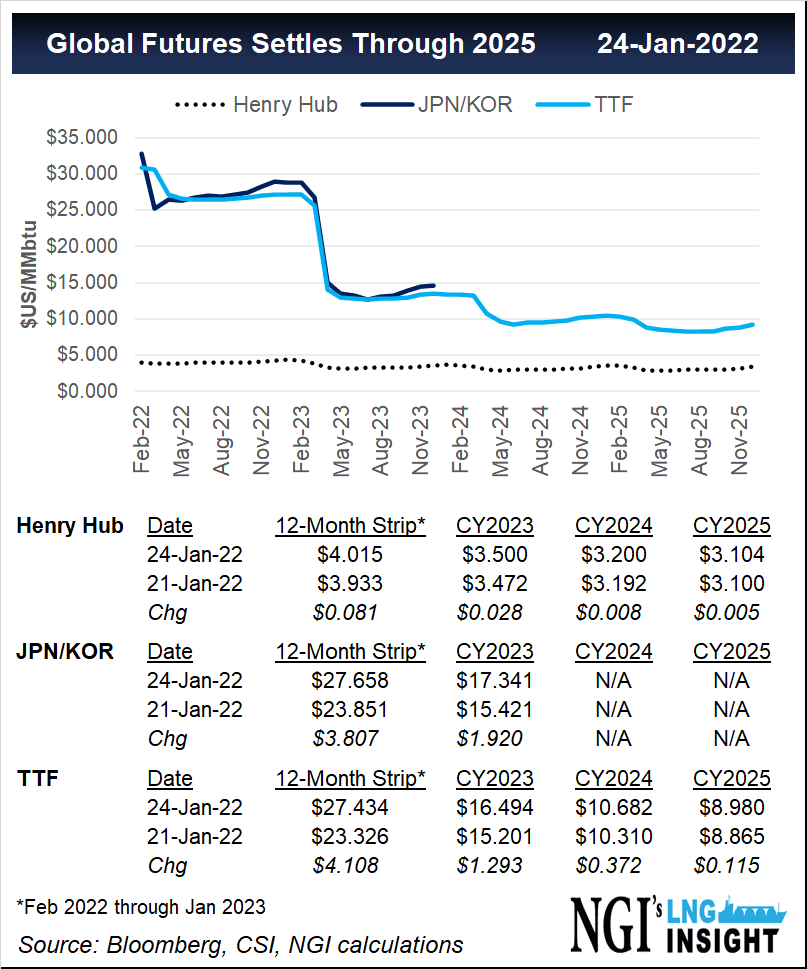 Recent planned and unplanned maintenance issues, feed gas shortages and technical problems have shut some LNG facilities for a few weeks, months or more than a year in the case of Norway’s Hammerfest LNG.

Some LNG production outages were resolved in the second half of last year and will continue to be resolved in the first half of this year, senior fellow Mike Fulwood oft the Oxford Institute for Energy Studies told NGI. He added that more supply would come online from the expansion of Cheniere Energy Inc.’s Sabine Pass terminal and Venture Global LNG Inc.’s Calcasieu Pass project in the United States.

If geopolitical tensions between Russia and Ukraine escalate, a lack of LNG supply and any unexpected production outages could see global LNG prices increase, Fulwood added.

Buyers have been caught short with planned and unplanned production outages since last May. An unexpected technical problem at Peru’s Pampa Melchorita facilities in late May shut the plant for four months.  Algeria’s Sonatrach shut down Train 1 at its 4 million metric tons/year (mmty) Skida plant for at least a month. Both trains were shut at Russia’s 11.49 mmty Sakhalin-2 facility in July and August for maintenance. Up to five cargoes were reported delayed during the maintenance period.

The outages have occurred at a time of extreme volatility, as gas prices have swung since early last year following Covid-19 outbreaks, geopolitical tensions in Europe, sporadic weather and fierce competition for supplies amid the world’s top gas consumers.

A lack of feed gas from the Pegaga field has been key to Malaysia’s 30 mmty Bintulu LNG complex’s lower output since last August. The situation has improved since high mercury levels were detected last summer. Pegaga was expected to start production at the end of 2021, but state-owned Petroliam Nasional Berhad, aka Petronas, recently said first gas is now expected by the end of March.

At BP plc’s Tangguh LNG facility in Indonesia, Train 3 is slated to restart in December or possibly early 2023 after more than a year of delays because of Covid-19 restrictions, according to the country’s upstream oil and gas regulator SKK Migas.

Shell plc’s Prelude floating LNG vessel offshore Western Australia has been shut indefinitely following official orders from the Australian offshore safety regulator. The regulator said Shell must keep the plant offline until the comapny can prove it can safely recover the project’s power and services. Prelude shut down in early December after a fire caused a power outage to the  3.6 mmty facility. Prelude reportedly produced about 2.2 mmty during 2021.

Train 2 at Chevron Corp.’s Gorgon LNG facility in Australia shut down last month following outages of Train 1 and 3 last year.  Chevron operates the 15.6 mmty plant. A start-up date has not been confirmed for Train 2, although “maintenance work at Gorgon LNG Train 2 is safely progressing, and we expect to commence restart activities in the coming weeks,” spokesperson Shelby Yazmadjian told NGI. Production continues at Train 1 and 3.

Feed gas problems at other LNG plants across the world are lingering. Train 1 at Trinidad and Tobago’s four train 14.8 mmty Atlantic LNG closed indefinitely in mid-2021 because of a feed gas shortage, which eliminated 20% of the facility’s capacity.

In Africa, throughput from Nigeria LNG decreased by 20% in 2021, attributed to insufficient feed gas. The long-awaited  8 mmty Train 7 started construction in June, which would increase Nigeria LNG’s capacity to 30 mmty from 22. Train 7 has taken more than a decade to move forward to the construction phase.

In addition, Equatorial Guinea’s 3.7 mmty EG LNG facility halted production from late September to November when feed gas supply was disrupted due to technical issues. The plant usually loads one cargo per week.