Low natural gas prices should boost demand growth in the medium term, and the export market could tighten in the mid 2020s, but there remains uncertainty in the forecast in part because of Covid-19, according to Equinor ASA’s 10th Energy Perspectives report. 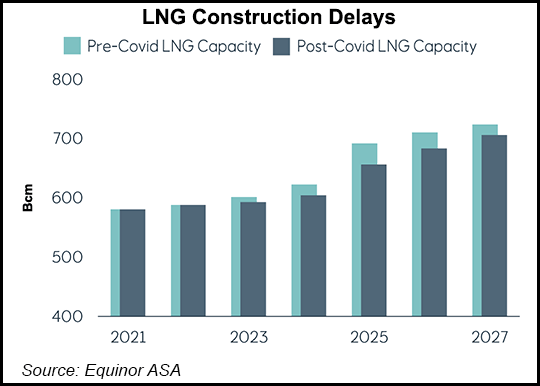 For natural gas specifically, producer behavior and the timing of the next liquefied natural gas (LNG) investment cycle “will be key drivers for the market,” the economics team said.

“2020 has been an extraordinary year,” said chief economist Eirik Wærness in issuing the report on Tuesday. “The impacts of Covid-19 have led to a considerable decline in energy demand, energy prices and global greenhouse gas (GHG) emissions.”

Since launching the outlook 10 years ago, “we have been surprised by the extent and impact of the shale revolution, and coal has been replaced faster than we anticipated,” Wærness said. “However, we hit the target surprisingly well regarding the growth in renewables during the past 10 years. We were also right about the oil demand, but for the wrong reasons. Nobody could predict the dramatic consequences that a pandemic would have on the energy demand.”

CEO Anders Opendal said the “energy market turmoil we have seen this year far outweighs anything else I have experienced through my career in Equinor. The pandemic is still affecting societies and markets, uncertainty is high, and no one can predict what the short- and long-term effects will be…Attempting to answer these questions makes scenario thinking more important than ever.”

Equinor’s economics team used three scenarios to lay out forecasts for the next three decades: Reform, Rivalry and Rebalance. Each describes possible outcomes for how the world economy may develop, the global energy mix, energy demand and GHG emissions toward 2050.

Reform builds on trends seen today in markets, technology and policy, expecting them to continue to unfold and develop at a similar pace. Rebalance is a “well below” 2 C scenario challenging the assumption that the world will reach its climate and sustainability goals without significant consequences for economic growth and global income distribution.

Rebalance, a new scenario, is a “necessity,” according to Equinor. Economists still maintain the concept of a world limited to an under 2 C carbon target. However, it is “no longer” realistic to suggest the world should have the highest gross domestic product (GDP) of all the scenarios by 2050.

The Rebalance scenario segues with Equinor’s recently announced goal of net-zero emissions from all of its activities and those of its products, aka Scope 1-3, by 2050.

“In 2020, the world has reached a point where a new balance must be struck between prioritizing economic growth and the well being of people and the environment if we are to deliver a plausible path to achieving climate targets,” said the economics team.

Specifically for the gas market, the combined effects of negative demand growth, high storage injections in 2019 and 40 Bcm (1.4 Tcf) of new LNG supply capacity added to the market over the last year.

“With the unfolding of the new Covid-19 pandemic, gas demand dropped as businesses closed, power demand was reduced and industrial demand slumped. The already well supplied global gas market was overwhelmed, with producers chasing demand among contestable customers in Europe. This resulted in unprecedented low prices and production shut-ins.”

Before Covid-19, an estimated 85 Bcm (3 Tcf) of LNG capacity “was expecting investment decisions over this year and next,” economists noted. “Both capital constraints and low prices are now putting projects on hold and delaying new project developments.”

In the medium term, low gas prices should incentivize demand growth, and a lower capacity build-up in the LNG market could contribute to market tightening toward the mid 2020s.” Still, how producers react and when LNG investments begin again are likely to drive the market.

“In addition, the energy transition will eventually challenge the role of natural gas in the global fuel mix,” they noted.

“The strategic implications for resources owat an annual growth rate of 0.5% between 2025 and 2059. Asia would make up 63% of the growth, “providing a pull signal on supply in all geographies, including LNG value chains.” LNG supply is forecast to reach 980 Bcm (34.6 Tcf) in 2040.

In the Rivalry scenario, “policies shift away from emissions reductions and energy efficiency toward energy supply control, favoring local resources over imported gas.” This forecast shows LNG projects discouraged because of increased political risk. Gas producing regions including the United States, the Middle East and Russia are forecast to see higher demand, whereas Asia and Europe would reduce imports.

In the Rebalance forecast, the use of new technology, energy efficiency and more even income distribution would help deliver global sustainability targets. In Rebalance, increased economic growth and energy use in emerging regions relative to the industrialized regions, “implies growing gas demand” versus the Reform scenario in Africa, India and Southeast Asia. However, mature markets “reduce their gas reliance.”

China is still a main growth engine in the Rebalance scenario, but a weaker GDP outlook and the shift from the energy intensive industries to service industries “dampen gas growth versus Reform.”

Because it is a fossil fuel, “gas is exposed in the long term” under the Rebalance scenario, economists said. The renewables share in the power sector also is seen increasing. Gas still plays a “vital role” in phasing out coal, and it “complements intermittent renewable supply.”

Intermittent generation and demand variability could lead to “a significant need for flexibility in the electricity system,” the Equinor team noted.

Carbon capture, utilization and storage, aka CCUS, along with “blue” hydrogen also should support gas demand in the Rebalance scenario.

“We do not know for certain how the development will be after the pandemic,” Wærness said. “It is precisely in times of much uncertainty that scenario planning is more important than ever. The outcome space is big, and the choices made in the next years will be vital for how the world is developing to a sufficient extent in a more sustainable direction.”