BP plc’s global oil and natural gas projects remain key to profits and viability over the next decade, but make no mistake about it, the integrated energy major is charting a path toward a renewables-driven world, CEO Bernard Looney said Wednesday. 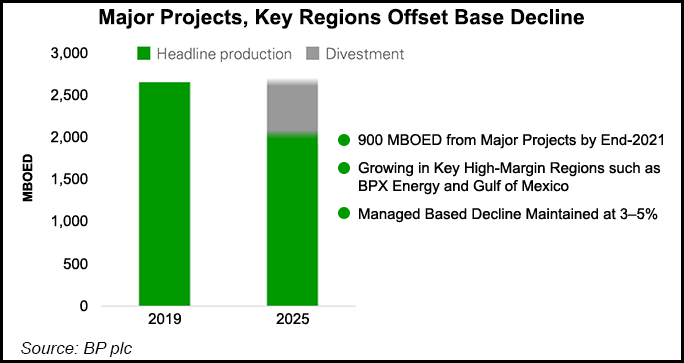 Speaking on the third and final day of presentations by executives who laid out the strategic vision for the London-based major, Looney said the road may be bumpy and mistakes are expected, but there is no turning back.

North America’s No. 1 natural gas marketer, and one of the world’s top oil traders, is charting a net-zero emissions path, one rarely taken by a fossil fuel producer. BP launched its “new purpose” in February, to become a net-zero company by 2050 or sooner to help get the world to net zero. The strategy is revamping BP from its status as one of the top international oil companies to becoming instead an integrated energy company.

The reinvention is “not a form of altruism, nor is it charity or blind faith,” Looney said. “We are here to grow value for our stakeholders in a way and on a scale that we wouldn’t be able to do without reinventing ourselves. We believe the timing is right, the strategy is right and the opportunity is off the charts…If we get this right, and obviously, we fully intend to, we all stand to benefit.”

It won’t be easy to slowly shun the massive fossil fuel engine that BP has created. The Lower 48 business, BPX Energy, is housed in relatively new digs in Denver. It was only two years ago that BPX became an onshore producing giant with BP’s $10.5 billion purchase of BHP’s Texas-rich assets.

BP plans to continue being a global oil and gas producing behemoth through the coming decade, executives said. The overhaul is no overnight event, and the producing assets would continue to be the backbone of near- to mid-term earnings performance.

There’s also no certainty investors would climb aboard with the new strategy, Looney acknowledged. However, the long-term plan is “based on an absolute mountain of work” that has taken more than a year of analysis.

The proof is in the details, he said. “We opened the doors wider than we’ve ever done before…shared more information about our strategy and our plans” than any energy company likely ever has.

BP has “conviction in our strategy,” confidence in the plan and a “commitment to deliver it,” he told investors and analysts.

“The planet needs change, and the science is very, very clear on that,” said the CEO. “We’ve been saying that for a long time, the world is not on a sustainable path.” It’s not only that society wants change, but “people everywhere no matter where you go in the world, want energy to be cleaner and more affordable.”

While the future is uncertain, “the energy mix is changing…Oil and gas are going to be increasingly challenged,” while in renewables and alternative fuels, “we see incredible growth.”

The forecast has been “reinforced by the pandemic…and therein lies a huge opportunity for our company.”

‘Right Thing To Do’

Yes, Looney said, “rewiring our company for a net-zero future requires trillions of dollars in investment.” Still, by “reimagining energy, there is an opportunity to create value, strengthen our resilience and help the world get to net zero…All of this convinces us that reinventing BP is without question the right thing to do for our employees, our shareholders and importantly, for broader society.”

This “enormous challenge is not without risks. Not everyone is going to agree that what we’re doing is right and that’s OK…I also have no doubt that we’ll make some mistakes along the way. That’s also OK as long as we learn. We don’t take this lightly,” and “we are very clear-eyed about what it will take…”

The bottom line is to deliver “solutions for customers. That’s supported by a disciplined financial framework and a compelling investor proposition.” The path also is bolstered by a “diverse, dynamic and highly motivated team,” he said. “In many ways, all of the pieces of the puzzle are in place. All of this gives us confidence” to deliver on the promises.

Looney said he’d been admonished by his team that he’s perhaps come across as “too stern” in the commitments for BP. He answered by noting his admonitions about the future health of the planet “reflects deep personal commitment to getting this right for the company I love, BP, and for employees and for the world. This is serious stuff.”

Reinventing BP means it has to be “leaner and flatter.” For example, 10,000 employees received their walking papers in June, some who had been with BP for up to 40 years as “several tiers of management” were eliminated. The cuts across the board have come to strengthen the balance sheet and “align” to future commodities prices.

Besides staff cuts, BP has divested its petrochemical operations and adjusted the dividend. More reductions are set to come to give the executive team more flexibility to build partnerships “where we can create more together than on our own,” Looney said.

BP announced a major partnership with Microsoft Corp. on Tuesday. It also has invested billions in the past few months with partners to build its renewables business.

“The reality of life is that we cannot do it alone,” Looney said. “As good as our team is…we need partners that complement our capabilities or quite frankly, do things better…”

In addition, he said policymakers have to step up to “incentivize lower carbon choices.” As well, “we need civil society to constructively challenge us on plans. We need customers to buy our products, and we need investors to trust us. In return, we intend to be and will be good stewards of their money.”

That said, even if oil and prices move higher, Looney said BP “will not compromise by chasing volumes over value.”