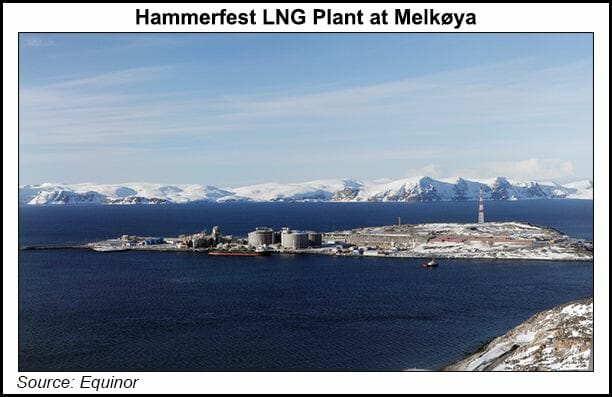 The Norway-based energy major still expects to deliver production growth of around 3% on average from 2019 to 2026 through “competitive and resilient projects.” The net-zero ambition is designed to strengthen future competitiveness and value creation for major projects on the Norwegian continental shelf.

“Equinor is committed to being a leader in the energy transition,” said CEO Anders Opedal, who took over running the global operator on Monday. “It is a sound business strategy to ensure long-term competitiveness during a period of profound changes in the energy systems as society moves toward net zero. Over the coming months, we will update our strategy to continue to create value for our shareholders and to realize this ambition.”

Longer term, Equinor plans to produce less oil and natural gas than it does today. The ambition overall is to reduce its direct, indirect and customer emissions, referred to as Scope 1, 2 and 3 greenhouse gas (GHG) emissions.

Equinor has set “boundaries and assumptions” for the net-zero goals.

“Success will depend on society moving toward net zero in 2050,” it said. “We assume a well functioning market for carbon capture and storage and natural sinks, and that these mechanisms can be accounted for as negative scope 3 emissions.”

Equinor also assumes that a hydrogen market will be developed. In addition, it assumes that “an increasing share of oil and gas will be used for petrochemicals toward 2050.”

Equinor launched a strategy earlier this year to achieve carbon neutral global operations by 2030 and reduce absolute GHG emissions in Norway to near zero by 2050.

“Equinor has for years demonstrated an ability to deliver on climate ambitions and has a strong track record on lowering emissions from oil and gas,” Opedal said. “Now, we are ready to further strengthen our climate ambitions, aiming to reach net zero by 2050.”

To develop into a “broad energy company, renewables will be a significant growth area.” Equinor previously set a strategy to profitably grow its alternative energies business with production capacity of 4-6 GW by 2026 and 12-16 GW by 2035.

“Equinor now plans to expand its acquisition of wind acreage, with the aim of accelerating profitable growth and will continue to leverage its leading position in offshore wind,” management said. Renewables are to become a separate reporting segment beginning with results in 1Q2021.

“Climate change is a shared challenge,” Opedal said. “The combined efforts of governments, industries, investors and consumers are crucial to reaching net-zero emissions, for Equinor and for society. Together, we can overcome technological and commercial challenges, cut emissions, and develop CCS and zero-emission value chains for a net-zero future.”

Last week Equinor also issued its third quarter results, which were “impacted by weak prices as regions across the world” are “still severely affected by the pandemic,” said former CEO Eldar Sætre.

“Our focus has been, as always, on long-term, fundamental trends, volatility and market reactions,” he said. Based on our analysis, including supply as well as demand impacts, we expect average oil prices to gradually increase to $65/bbl in 2025, with a continued modest uptick toward 2030. After 2030, we expect a gradual decline to $64 in 2040 and below $60 in 2050.

“Clearly, oil price estimates that far out in time are associated with great uncertainty. But remember, we require sanctioned projects to be robust at much lower prices than these long term levels.”

In February the executive team presented a project portfolio for new deals to be put online by 2026 representing around 6 billion boe at an average breakeven oil price of below $35/bbl.

In other news, the recent fire at the Melkøya liquefied natural gas (LNG) processing plant in Norway could require the plant to be shut-in for a year for repairs, Bacher said. An undersea pipeline transports gas from the Barents Sea to the processing station, where it is converted into LNG and then exported.

Equinor delivered total equity production of nearly 2 million boe/d in 3Q2020, versus 1.9 million boe/d a year ago. Adjusting for portfolio transactions and government-imposed curtailments, underlying production growth was around 9%.

“For 2020, we expect a production growth between 1.5% and 2%,” Sætre said. “This outlook depends on how the European gas market develops where we use our gas production flexibility to boost value creation.”

Expected capital expenditures (capex) this year is around $1.1 billion. The guided organic capex levels for 2020 and 2021 “are unchanged at around $8.5 billion and $10 billion respectively,” said the former CEO.

Equinor lost $2.1 billion in 3Q2020, versus a year-ago loss of $1.1 billion. Results in the Exploration and Production (E&P) International segment were impacted by low prices, partially offset by a reduction in costs. The E&P USA segment was also impacted by weak prices, while continuing efforts to reduce activity and costs.

Net impairments to 3Q2020 earnings included $1.38 billion in the E&P USA segment, with $1.21 billion related to reducing the value of its U.S. onshore portfolio, mostly for impairments to the Bakken Shale portfolio.