Before the fall redetermination season in October, operators squeezed for cash are more worried than they were a few months ago about their ability to borrow against natural gas and oil reserves. 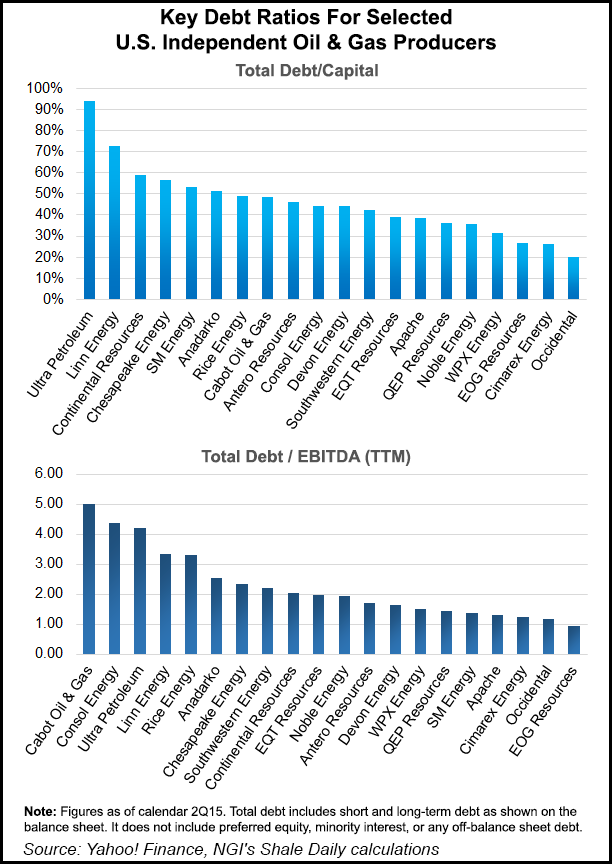 Prices show no signs of strengthening, and the consensus among many in the know — exploration and production (E&P) executives — is that there’s no clarity on when the market could strengthen.

At the annual Barclays Capital energy conference held earlier this month, many E&Ps indicated that they are now in survival mode (see Shale Daily, Sept. 14). No one seems to have a handle on where the industry is headed.

Anadarko Petroleum Corp. CEO Al Walker, who runs a global E&P enterprise, told the Barclays audience there was no “great sense of where oil prices are going.” So he turned to colleague Freeport-McMoRan Inc.’s Jim Flores, who runs the company’s E&P arm, and asked what his forecast was.

According to Walker, Flores answered, “’It’s raining and it’s going to rain for a long time. We’re all going to get wet. A few people are going to drown.’”

Anadarko is “capable of handling whatever the market gives us,” Walker told the audience. Other E&P management teams may not be so sure.

The percentage of borrowers predicting a base decrease to bank redeterminations has grown to 79% from 68% in the spring, according to a new survey by Houston’s Haynes & Boone LLP. It surveyed financing professionals from upstream, midstream and oilfield services firms and compiled responses from 182, broken out with 40% oil and gas management, 40% banking/private equity financiers and 20% professional services companies. Overall, respondents predicted an average decrease in the borrowing bases of about 39%, versus 25% ahead of last spring’s redeterminations. This fall’s redeterminations long have been expected to be more painful than the ones earlier this year (see Shale Daily, Feb. 24).

“The first option producers have is to stretch what cash flow they do have as far as possible,” said NGI‘s Patrick Rau, director of strategy and research. Cutting capital expenditures has been paramount, followed by “controlling headcount, lowering/eliminating dividends and getting creative with supplier contracts.”

Chesapeake Energy Corp., which is among those that has cut its dividend, also has been getting creative with its suppliers. It began working with Williams months ago to restructure onshore midstream gas gathering obligations, culminating in a deal earlier this month (see Shale Daily, Sept. 8; Aug. 5). Other ways E&P companies are conserving cash is by asking for price concessions from suppliers, like oilfield services operators (see Shale Daily, July 23; July 22; July 20).

Creativity and cooperation are the watchwords.

“With respect to bank revolving credit facility redeterminations, which hit en masse in October, my sense is banks do seem willing to work with their E&P customers right now, at least to the extent they can,” Rau said. Banks have two ways to work with E&Ps to help them cope.

“One is to keep the borrowing base as high as possible,” he said. “The other is financial covenant relief,” such as loosening total debt to EBITDA, or earnings with interest, taxes, depreciation and amortization — or EBITDAX ratio. “Of course, that comes at a cost, but it could be a lifeline for some producers to get through the rough patch now, and worry about the debt load later.”

Banks more often than not don’t want to own an E&P.

“It might be one thing for a thrifts/savings & loan to take over defaulted real estate property, since they are in real estate industry,” Rau said. “But how many geologists work for the commercial and investment banks out there? In fact, many investment banks have been getting out of the commodities business in recent years.”

The Energy Information Administration (EIA) on Friday said 2Q2015 financial statements for many onshore operators “suggest continued financial strain…” The large amount of debt accumulated over the past few years to acquire onshore leases has led to a high percentage of cash flow now being devoted to servicing debt, government researchers said.

Many E&Ps are able to buy some time with their hedges, which are in place through the rest of this year, Rau said.

“However, producers “aren’t nearly as well hedged for 2016 as they were in 2015, and if commodity prices are in the gutter come next April, which is the next round of redeterminations, banks may not be as accommodating.”

E&Ps have another financing alternative, however, which is to refinance expiring debt at a much higher coupon rate,” he said. “But that is the ultimate ‘survive now, pay for it later’ move, since that tends to greatly increase a particular company’s cost of capital.”

One final avenue are asset sales, which may cushion the fall for some E&Ps and oilfield services operators (see Daily GPI, Sept. 17). Merger and acquisition activity is expected to increase through the rest of this year and into 2016. But at what cost to E&Ps with cash needs?

“It’s tough to get top dollar for E&P acreage these days, but producers might do better selling any midstream assets they might have,” Rau said. Many more publicly traded master limited partnerships exist today than during the last oil and gas downturn in 2008, “so there should be that much more competition for midstream assets, especially in faster growing areas.”

Redeterminations happen twice a year, so the stress to reduce leverage will be an ongoing task — for a long time. Standard & Poor’s Ratings Service (S&P) in a report this month said combined, the oil and gas sector has nearly $242 billion in rated debt scheduled to mature from the second half of this year through 2020. Of the debt scheduled to mature, $124 billion is speculative grade. Companies carrying speculative debt “show weaker credit metrics than those rated investment grade and so, often are subject to a greater degree of refinancing risk, especially when investors become more risk averse and volatility rises or liquidity decline.”