Natural gas prices may not be attractive enough for some producers, but Encana Corp.’s management team said it’s possible to make enough money in the Haynesville Shale to justify a five-rig program this year. 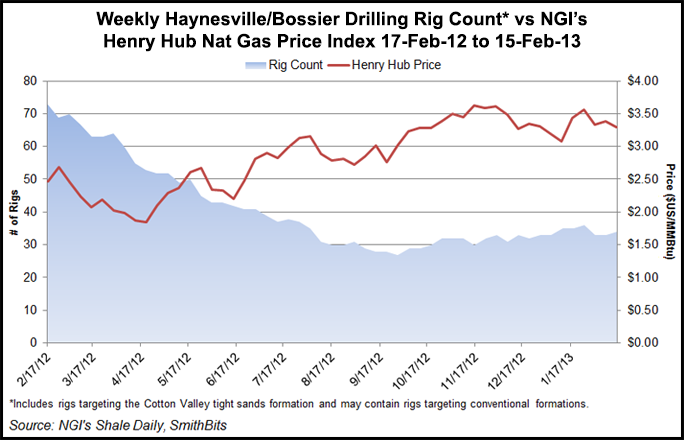 The Calgary-based explorer cut its teeth in unconventional drilling in the Louisiana-Texas shale, but like other operators, it fled the play as gas prices swooned. The shift continues to more oil and liquids targets, but the Haynesville offers potential that other plays don’t have, said U.S. exploration chief Jeff Wojahn.

“We’ve executed at a much higher level” in the Haynesville, he told analysts during a conference call. “This is a relatively modest program,” and the company hasn’t outlined a longer-term development plan.

“Our primary decision for pursuing and reinvesting in Haynesville is because of the strong capital efficiency and profitability of the program,” Wojahn said. “Why is that so? I think there are three factors that we all need to take into account.”

According to Wojahn, a “large component of our confidence in the program is also related to our previous history and activity…” Encana had embarked on a large land retention program, which allowed more drilling, but it also required more drilled wells on a per-section basis. “This allowed us to find the best-of-the-best sweet spots in the play…And so that puts us in a somewhat unique position.”

Second, new state rules in Louisiana allowed Encana to become the first in the industry to obtain a voluntary drilling unit with six wells. Encana had finished the wells just before pulling out that were the “highest in the play that extended outwards to reaches of 7,500 feet…

“Over the last year, we’ve been able to look at those wells and carefully understand…their performance and what we found was that they were highly efficient. It changed our belief in what kind of supply concept we can drive in the best part of the play.”

Using the new data, Encana found a third reason to drill: it could make money in the play.

“We’re estimating that our supply cost will be in that $2.50/Mcf range,” said Wojahn. “What that means from the profitability point of view is using the flat $3.50 Nymex [New York Mercantile Exchange] price deck, we are able to achieve rate of return of approximately 30%.”

Most of the new volumes would begin in 2014, he noted. “Using a $4 price deck…the yield is approximately 40% rate of return into project economics. And that type of return would be reflective of what the current Nymex strip is for 2013.”

Encana’s team thinks it can be “very profitable in the price environment we are in.”

Interesting to note is that while NGI‘s Henry Hub natural gas price index rolled lower during the first three and a half months of 2012 in lockstep with a falling Haynesville/Bossier rig count, the two indicators terminated their relationship during mid April. After the Henry Hub reached $1.85/MMBtu for the week ending April 20, 2012 with an unconventional rig count in the Haynesville of 53 active rigs, prices moved higher, but rigs continued to decline in the play. For the week ending Feb. 15, 2013, the Henry Hub Index stood at $3.29/MMBtu, while only 34 rigs were active in the Haynesville, according to NGI‘s Shale Daily Unconventional Rig Count.

The producer also is reviewing six or seven emerging liquids and oil targets, which are being tested over the next six months to determine “what plays truly can be fundable and competitive…”

Among them are the Niobrara and Piceance basin plays, including the Denver-Julesburg formation in Colorado. Other plays being evaluated include the Eaglebine formation in Texas, as well as Michigan. In Michigan, Encana is drilling and completing four wells, which when done would give Encana “a clear decision point for the future of that basin.”