Devon Energy Corp. is selling Tuscaloosa Marine Shale (TMS) assets in Louisiana and Mississippi, offering about 297,000 net acres (nearly 95% undeveloped) within the unconventional oil play, and production of about 600 b/d, according to the offering by Scotia Waterous (USA) Inc. 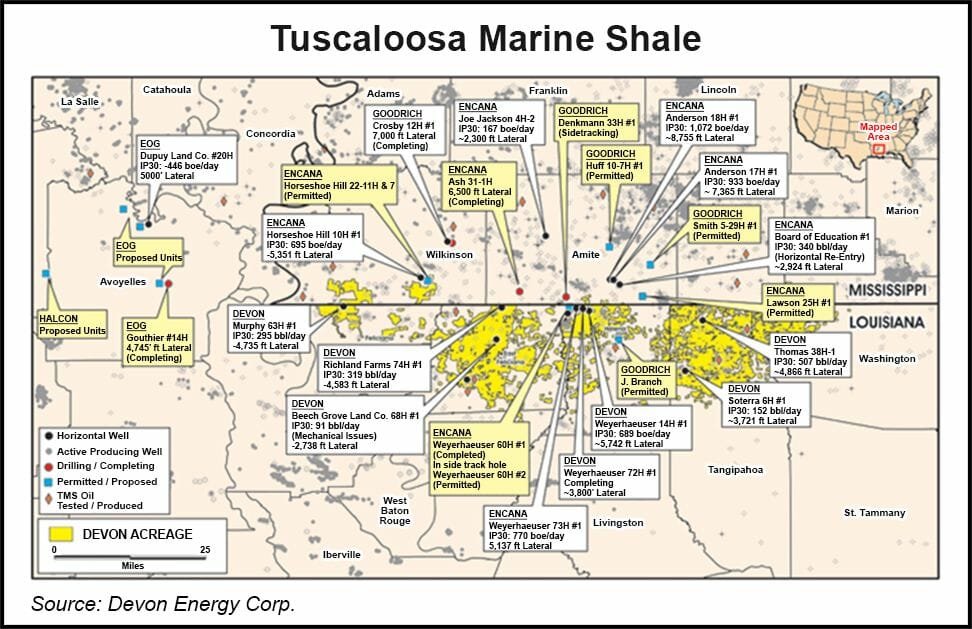 “The TMS play is a large, unconventional oil resource play that is stratigraphically equivalent to the Eagle Ford/Woodbine plays of south and east Texas,” the offering says. “Well results in the TMS are promising, and there is growing confidence in the prospectivity of the play given significant leasing and recent drilling activity.”

Eight wells have been drilled on the acreage being offered; six are producing and one is awaiting completion. “…[T]he company’s acreage position has been largely delineated, and resource volumes have been quantified,” the offering says.

“Devon is in the early stages of development of the play and has made considerable progress on cost reduction and well performance, with further optimization under way. The company expects one additional horizontal well, the Weyerhaeuser 72H, will be online in early February 2013.”

The acreage is in Devon’s joint venture with Sinopec (see Shale Daily, Jan. 4, 2012), according to Wells Fargo Securities analyst David Tameron. “The [sale] announcement is not a surprise given management recent commentary about the play,” Tameron said in a note Tuesday. “Additionally, we’ve recently heard that [the] company may discuss monetization of noncore Canadian assets and repatriation of offshore on the upcoming [conference] call.”

On Wednesday Tameron wrote that “there has been increased speculation, as we have previously written, that Devon may engage in a corporate acquisition,” adding that the Bakken Shale region seems like the most likely target. “The Street sentiment has been negative on Devon, and some transformational [deal] like a corporate acquisition, if it’s the right deal, could change some of that perception.”