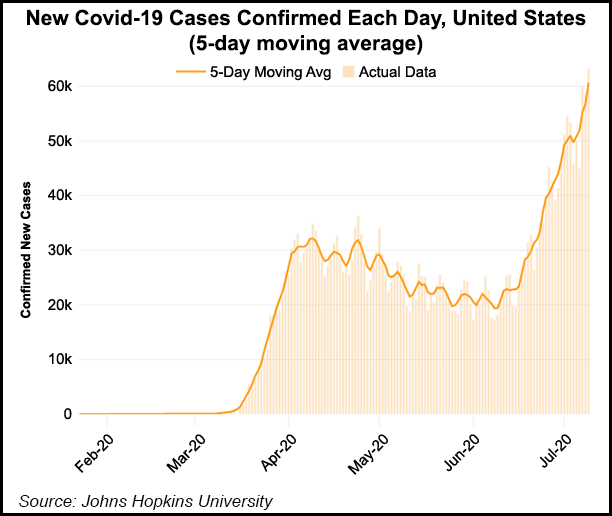 Although economic activity and oil demand are recovering from the first wave of Covid-19, a resurgence of the pandemic in regions such as North and South America “is casting a shadow over the outlook” for the oil market, the International Energy Agency (IEA) said Friday.

“Only time will tell if the economic impact will be serious,” the global energy watchdog said in its July Oil Market Report (OMR), adding that both Brent and West Texas Intermediate (WTI) prices have been “remarkably stable” over the past few weeks, with both benchmarks hovering around $40/bbl and the contango flattening for both futures curves.

“Futures markets are anticipating a transformation in the oil market from substantial surplus in the first half the year to a deficit in the second half,” researchers said.

West Texas Intermediate (WTI) crude prices rebounded strongly after briefly plunging negative in April, but have struggled to break past the $40 threshold for the last month or so.

The front-month WTI contract was trading at $40.09 around 10am Friday, up 47 cents from Thursday’s settle.

IEA analysts cautioned that, “While the oil market has undoubtedly made progress since ‘Black April,’ the large, and in some countries, accelerating number of Covid-19 cases is a disturbing reminder that the pandemic is not under control and the risk to our market outlook is almost certainly to the downside.”

IEA is forecasting that global oil demand in 2020 will average 92.1 million b/d, down 7.9 million b/d from 2019, a slightly smaller decline than in last month’s report.

“This is mainly because the decline in 2Q2020 was less severe than expected,” researchers said, adding that they expect demand in 2021 to recover by 5.3 million b/d.

“The recent increase in Covid-19 cases and the introduction of partial lockdowns introduces more uncertainty to the forecast,” they said.

Global oil supply fell by 2.4 million b/d in June to a nine-year low of 86.9 million b/d, researchers said, explaining that robust compliance by the Organization of the Petroleum Exporting Countries and its allies, aka OPEC-plus, to coordinated production cuts, combined with “steep declines from other producers, led by the United States and Canada, has cut world oil output by nearly 14 million b/d since April.

“If the OPEC-plus cuts stay in place as agreed, global supply could fall by 7.1 million b/d in 2020 before seeing a modest recovery of 1.7 million b/d next year.”

The reality of a Covid-19 resurgence in the United States is starting to set in for oil traders, who still have not fully priced in this downside risk, according to new analysis by Rystad Energy.

The United States reported an all-time high of 64,771 new cases of the virus on Wednesday, according to Johns Hopkins University.

Rystad’s Louise Dickson, oil markets analyst, said Friday that while the oil market has been waiting for “a deep shock” to act on the resurgence of cases, the shock has instead taken the form of a “continuous non-stop rise of Covid-19 cases in key markets…”

“Traffic patterns that have been seeing a continuous improvement over the last two months have now stalled and we see again reduced traffic and gasoline demand throughout the southern states and the midcontinent.”

The latest crude oil storage data also paint a bearish picture, as the Energy Information Administration reported a build of 5.7 million bbl into commercial crude stocks for the week ended July 3, putting inventories at 539.2 million bbl, or 18% above the five-year average for this time of year.

“Another surge in Covid-19 cases and lockdowns would be devastating to oil market recovery models everywhere, including ours,” said Dickson, explaining that Rystad’s base case shows the supply-demand balance reaching “near-perfect parity in July” before stumbling its way through a choppy recovery in 2020.

A second wave of the pathogen “would flip the oil market back into the chaos [of] April and May, albeit the chaos would be more managed and smaller in scale,” Dickson said.

She also highlighted that OPEC-plus is set to ease its supply cuts in August.

Meanwhile, “the rest of the world isn’t on a quota regime and with both Brent and WTI above $40/bbl, many operators, especially in North American shale, are eager to get wells back on production,” Dickson said, cautioning that if a second wave hits and demand worsens just as OPEC-plus and North American production come back online, “we are in for a very painful rest of 2020.”