Russian natural gas could increasingly find a home in China as the countries have strengthened ties in a way that could undermine some of the West’s economic sanctions and lessen the blow of Europe’s move away from imports.. 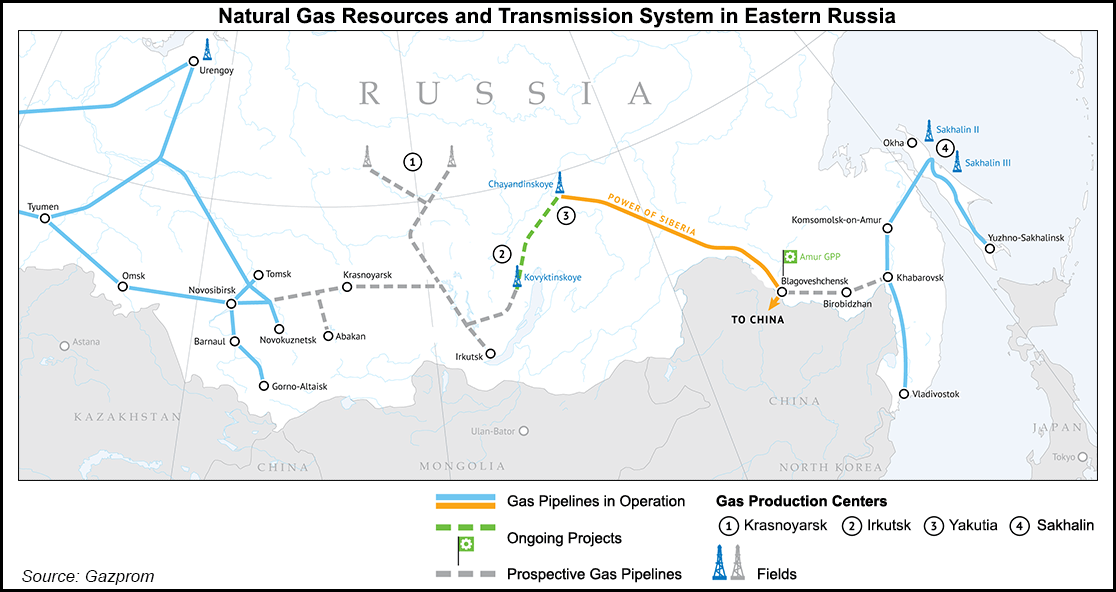 “China is in a difficult position,” geopolitics energy specialist Marco Giuli of the Brussels School of Governance in Belgium told NGI. China is unlikely to go along with the West and sever ties with Russia, he said.

“It is still a bilateral relationship, where the two countries need each other. By Russia severing commercial ties with the West, especially for energy, it could push Russia into the hands of China.”

Russia is “one of China’s most crucial bilateral relationships,” China’s Foreign Minister Wang Yi said earlier this week. Russia is counting on China for future support across all sectors, including energy.

“There is a strategic and political alignment between China and Russia,” added Oxford Institute for Energy Studies’ Michal Meidan, director of the gas research program. “China is being careful about not putting itself in a position that would expose its government and companies to secondary sanctions,” she told NGI.

Is Alliance Growing Between China And Russia?

China and Russia’s growing collaboration is evident, with bilateral trade between the two countries increasing nearly 36% last year to a record $146.9 billion, according to Chinese customs data. Energy and mineral products accounted for more than 70% of China’s imports from Russia, with significant increases in coal and natural gas.

Russia and China have agreed to three significant gas pipeline deals since 2014. If all planned projects were to be completed within the next decade, Russia’s pipeline capacity to China via  Gazprom PJSC would total 90-100 Bcm/year. By comparison, the operational Nord Stream 1 and the suspended Nord Stream 2 projects designed to move Russian gas to Germany have a combined capacity of 110 Bcm/year.

The planned natural gas increase to China over the next decade would come over the same time that Europe intends to gain independence from Russian fossil fuels. The continent imported 155 Bcm from Russia last year, which accounted for 45% of all of its gas imports. Europe may increasingly have to use natural gas suppliers in the United States and elsewhere to fill the void.

The proposed 50 Bcm/year Soyuz Vostok pipeline, or Power of Siberia 2 (POS 2), would cross Mongolia toward China. It would provide access to Gazprom’s gas fields in the Yamal Peninsula and Western Siberia that now deliver gas to Europe.

“China was previously wary about directly competing with Europe and accessing the same resources or fields,” Giuli said. “China usually looks to strike deals where China has exclusive access to Gazprom fields. But POS2 may now go ahead as Europe is looking at how rapidly they can reduce reliance on Russian gas. POS2 may be a good opportunity for China.”

Given how much gas the European Union imported from Russia in 2021, he said building POS 2 would be a priority for Gazprom to divert gas previously designated for Europe to the Far East.

Bloomberg reported Tuesday that China also may be interested in buying or increasing stakes in Russian energy and commodities as the West distances itself. Discussions are said to be at an early stage.

“I think Russia in the past has tried to keep some distance from Chinese investors, but it is possible in this current situation that Russia might turn more decisively to China for investors and operatorship,” Median said.

Russia also has been cut off from the global banking system and is unable to access foreign financing. Financing future Russian energy projects may fall on China.

Russia may try to keep its sovereignty over the upstream oil and gas assets left behind by Western companies, Giuli told NGI. However, certain projects that are commercially challenging may require outside Chinese capital that could come from China..

Western energy companies, including BP plc, ExxonMobil, TotalEnergies SA and Shell plc, are planning no new investments in Russia and plan to exit the country. That could leave equity stakes, LNG capacity and supply available for the taking.