President Biden on Tuesday increased pressure on Russia with economic sanctions and troop movements in response to escalation on the Ukrainian border. 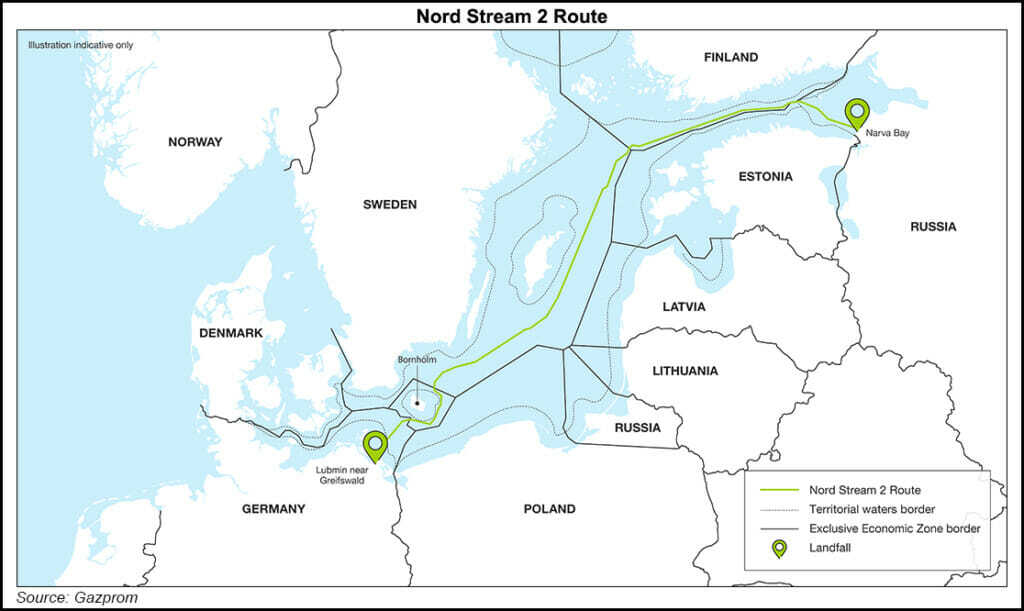 It was the latest pushback against the country by western allies of Ukraine after President Vladimir Putin announced he would recognize the sovereignty of two pro-Russian sepratist states along the eastern border and defend them with “peacekeeping” forces.

In a brief speech lasting roughly nine minutes, President Biden called Russia’s actions “the beginning of an invasion of Ukraine,” and laid out the consequences for what he expected to be an “incremental” ramp up to full conflict. Biden said “if Russia goes further with this invasion” the United States and western allies “stand to go further as well.”

Shocks To The Market

News of Russia’s actions and impending consequences sparked an increase in natural gas and oil prices during the day.

The March New York Mercantile exchange natural gas futures contract settled Tuesday at $4.498/MMBtu, up 6.7 cents from Friday’s close. April futures climbed 8.4 cents to $4.461. West Texas Intermediate futures were up more than 5% at midday to trade above $95/bbl. Brent crude, the international benchmark, almost met $100 but eventually settled down to $96.84/bbl at the end of the day. The prompt European gas benchmark Title Transfer Facility contract gained about $2 to finish above $26 Tuesday.

President Biden promised that his administration would attempt to shield domestic consumers from the consequences forced on Russia. The North Atlantic Treaty Organization allies were expected to put incremental pressure on Russia’s key economic levers and oligarchs closest to Putin.

Much like in the aftermath of Russia’s 2014 annexation of Crimea, President Biden announced sanctions for two additional Russian financial institutions. One is against state-owned development firm VEB.RF and its military bank. Biden said there would also be comprehensive sanctions on the country’s sovereign debt, essentially blocking western financing from Russia.

A collection of Russian elites were also to be added to the growing list of wealthy people from the country locked out from travel and international financial markets.

However, in drawing a contrast to 2014, the president promised the U.S. response would go “far beyond” the reaction to Crimea. The United States would continue to support Ukraine defensively, and U.S. troops already deployed across Europe would be moved to Baltic allies including Estonia, Latvia and Lithuania.

“The situation now is fundamentally different,” Scholz said. “That may sound technical, but it’s a necessary administrative step without which the certification of the pipeline cannot happen now.”

NS2 is majority owned and operated by Nord Stream 2 AG, a subsidiary of Russia’s Gazprom PJSC. Once completed, it would create another bridge for natural gas to flow through the Baltic Sea between Russia’s western shores and northeastern Germany.

Natural gas began flowing in October and commissioning ramped up through the end of the year. However, the pipeline’s startup was still pending approval by the German government in a decision that is to also be reviewed by the European Union (EU).

Muddying the waters on whether this would be a permanent end to NS2, Scholz said Germany’s Economy Ministry would reassess the project and consider Russia’s aggression.

European markets had seen some relief last week as Russia was said to be pulling back some troops. Western Europe relies on spot gas sales from Russia to meet some of its energy needs, especially during winter.

According to the latest NGI data, European storage capacity was 31.1% full and trending below the five-year average.

Shortly after Scholz’s announcement, White House Press Secretary Jen Psaki tweeted support and said it made good on promises from President Biden earlier in the month that an invasion of Ukraine would spell an end to the gas pipeline.

EU foreign ministers agreed on Tuesday to a sanctions package that includes “351 members of the Russian State Duma who voted for the recognition of the so-called LPR and DPR” and 27 other Russians individuals or entities.

British Prime Minister Boris Johnson also announced Tuesday sanctions on five Russian banks and three Russian “high net worth individuals.” Most of the banks and people on the UK’s expanded list have already been sanctioned for several years by other countries like the United States.

Analysts from ClearView Energy Partners LLC said this move appeared to be further evidence of an “incremental approach” by western allies. Analysts said the uncertainty of the situation meant continued upside risk for energy prices.
Mizuho Securities USA LLC’s Robert Yawger, director of energy futures, said Tuesday markets were viewing the news from Germany “as a de-escalation of the crisis.” He cited a rally in U.S. equity futures shortly after the NS2 news and improvement in some European commodities as a sign traders were feeling better about the outlook of war.