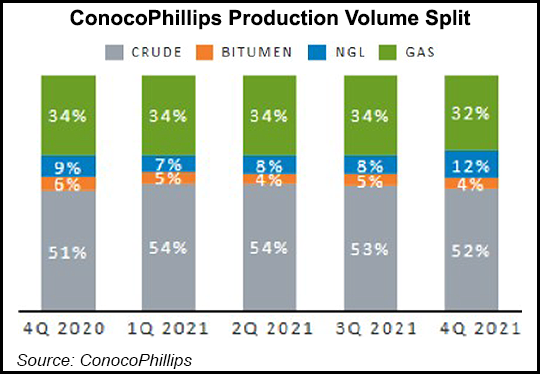 “We plan to continue running four rigs on that property, the same activity rate that Shell was running, through the remainder of this year,” Executive Vice President Tim Leach who oversees Lower 48 operations told analysts during the fourth quarter and full-year 2021 earnings call.

The Permian transaction, which closed in December, gave ConocoPhillips ownership of 225,000 net acres producing about 175,000 boe/d. Shell’s proceeds were $5.5 billion.

The deal closed several months after ConocoPhillips expanded its Permian footprint to about 700,000 acres through its $9.7 billion acquisition of Concho Resources Inc.

Although the Houston-based independent plans to keep the rig count steady on the former Shell property, the company has “quickly transitioned to our style of well drilling design, casing design, which is generally lower cost” since taking up operatorship, Leach said.

The company also “switched” the hydraulic fracturing (fracking) design, “which provides better economics using our style of profit fluids specs and cluster spacing,” he said. “So all of those are kind of the blocking and tackling of us putting our style of operations on those properties.”

Leach also said transitioning from drilling one-mile to two-mile laterals represented “the biggest opportunity in the near-term” on the new acreage.

“Just for a frame of reference, the difference between drilling a two-mile lateral on those properties and a one-mile lateral, everything else being held the same, is a 50 basis point improvement on rate of return on well economics, which generates about a 30% improvement in cost of supply,” said Leach.

CEO Ryan Lance underscored the need for cost control as inflation continues to rise amid a “strengthening commodity price” environment. Particularly pronounced in the Permian, inflationary effects are “kind of spreading a bit” to operations elsewhere in the Lower 48, he said.

OIlfield services for tubulars, trucking, labor and chemicals were cited as examples of costs that are particularly sensitive to inflation.

Lance said the company is seeing “a little bit higher pressure” from increased commodity prices “than maybe what we would have said even a month and a half or two months ago.”

ConocoPhillips reported 4Q2021 production of 1.567 million boe/d, excluding Libya, marking a 37% year/year increase in output. The company attributed much of the increase to “new production from Lower 48 and other development programs across the portfolio.” Libya output averaged 41,000 boe/d during the most recent quarter.

“Lower 48 ended the quarter with 20 drilling rigs and nine frack crews at work, including ongoing activity on the Permian assets acquired in the fourth quarter,” said management.

As “production remains unhedged,” the company said it “realizes the full benefit of higher marker prices.”

For 2022, preliminary production guidance is 1.8 million boe/d. During 1Q2022, output is forecast to average 1.75-1.79 million boe/d, which would be essentially flat quarter/quarter.

The company also noted that it anticipates a $7.2 billion capital budget for 2022, with $200 million for projects tied to bolstering environmental, social, and governance (ESG) performance.

The $200 million would be directed to reduce Scope 1 and 2 emissions intensity, as well as “several early-stage low-carbon opportunities” targeting end-use emissions.

Lance said ConocoPhillips in 2021 “continued to advance our commitment to ESG excellence, announcing plans to further reduce both our net and gross emissions intensity by 2030.”

ConocoPhillips expects to return $8 billion to shareholders in 2022. It declared a dividend of 46 cents/share plus a 2Q2022 variable return of cash (VROC) payment of 30 cents/share. Combined, the dividend and VROC represent a 50%-plus increase in returns to shareholders from 2021, the company stated.