Houston-based ConocoPhillips on Monday agreed to pay $9.5 billion to buy Royal Dutch Shell plc’s Permian Basin portfolio, which a Shell executive said reflected “our focus on value over volumes” as it accelerates its energy transition from fossil fuels. 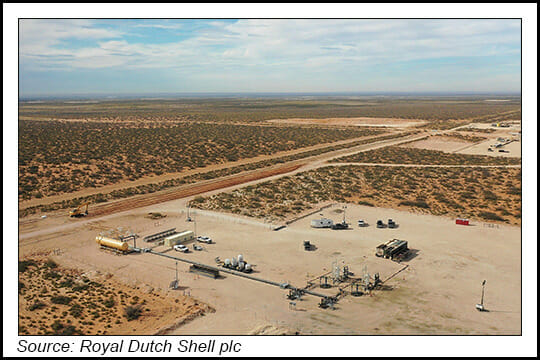 Shell’s Permian business includes ownership in 225,000 net acres with current production of around 175,000 boe/d. Shell Enterprise LLC reached the agreement, which is subject to regulatory approval.

“After reviewing multiple strategies and portfolio options for our Permian assets, this transaction with ConocoPhillips emerged as a very compelling value proposition,” said Shell Upstream director Wael Sawan. “This decision once again reflects our focus on value over volumes as well as disciplined stewardship of capital.”

Shell is eyeing net-zero emissions by 2050, and has been investing in a multitude of low-emission businesses and technologies to that end. During the 2Q2021 conference call, CEO Ben van Beurden discussed how Shell was advancing its carbon-neutral strategy.

A Dutch court in May ruled Shell had to reduce its carbon dioxide (CO2) emissions in 2030 by 45%, sharply more than the company had planned. Shell’s goal is to reduce CO2 emissions by the end of the decade by 20% from 2019 levels. It also is aiming to become a net-zero emissions business by 2050, with emissions cut by 45% by 2035.

The landmark ruling by the district court in The Hague, where the supermajor is headquartered, would require Shell to reduce CO2 emissions by 45% in 2030 across the entire business group, aka Scope 1 emissions. It also would apply to cutting emissions from 2019 levels from suppliers and customers, aka Scope 2 and 3 emissions.

“Indeed, we have said very clearly that we will upgrade, accelerate, step up, etc.” the decarbonization efforts, van Beurden said in July. Shell unveiled a more stringent CO2 reduction strategy in February, three months before the court’s ruling.

Shell said most of its Midland, TX-based employees who work in Permian-related activities and “many Houston-based employees” are to be offered employment by ConocoPhillips once the deal is completed.

Shell noted that since 2017, its Permian operations have reduced greenhouse gas and methane intensity by 80% “through investment in infrastructure and technology.”

Cash proceeds from the sale, set for completion by year’s end, would be used by Shell to fund $7 billion in additional shareholder distributions and to reduce debt. Shell’s Permian business in 2020 recorded a before-tax operating loss of $491 million. The transaction with ConocoPhillips is expected to result in an after-tax gain of $2.4-2.6 billion.