ConocoPhillips’ 1Q2021 profit marked its first amid the coronavirus pandemic and reflected both a recovery in global oil demand and a winter surge in domestic natural gas prices. 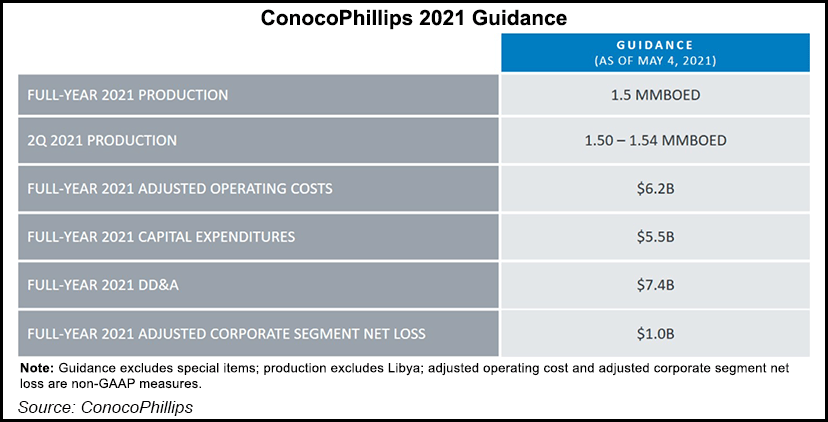 The Houston-based energy giant in the first quarter also closed its $9.7 billion acquisition of Concho Resources Inc., forming a Permian Basin powerhouse that will rival the output of the biggest players in the Lower 48’s most productive oilfield.

“The first quarter was a momentous one for ConocoPhillips,” said CEO Ryan Lance.

The world’s largest independent said the average price of its crude and natural gas liquids during the first quarter was $45.36/bbl, 17% higher than the $38.81 boe realized in the year earlier quarter. This reflected stronger oil prices and Winter Storm Uri’s impacts on gas realizations.

Crude prices recovered ground in the second half of 2020 and continued mounting in the first quarter. Brent and West Texas Intermediate prices in April hovered around their respective high levels since mid-2019. While crude’s continued recovery remains uncertain, given ongoing virus outbreaks in heavily populated countries such as India that could hamper demand, major producers largely expect demand strength in the second half of 2021 as vaccination programs expand globally.

Separately, the Organization of the Petroleum Exporting Countries and its allies, aka OPEC-plus, have begun to increase output this month with plans to add more than 2 million b/d into the market by July amid mounting expectations for global economic growth and a corresponding jump in oil demand.

Uri, meanwhile, delivered an Arctic blast to Texas in February, temporarily crippling the energy sector there and propelling natural gas prices. The storm, however, also curbed output. ConocoPhillips said Uri cost it about 50,000 boe/d of oil and gas production in mid-February, primarily from wells in the Permian and the Eagle Ford Shale in Texas.

The figures in the Permian will surely climb in coming quarters with the integration of Concho, a Permian pure-play. Concho was the fifth-largest producer by volume in the massive field. The combination makes ConocoPhillips one of the dominant players in the Permian, alongside the likes of Chevron Corp., ExxonMobil and Occidental Petroleum Corp.

With the acquisition, ConocoPhillips’ net acreage in the Permian increases fourfold to 700,000 net acres. Pro forma production potential with Concho is estimated at more than 1.5 million boe/d. The deal is projected to generate $500 million in cost and capital savings by 2022 and prove accretive to earnings and free cash flow.

“We’re only a short time into the Concho integration, but we’re already seeing the previously announced synergies materialize, and we expect to yield additional benefits as our integration progresses,” Lance said during a call with analysts Tuesday. “Our entire workforce is on a mission to emerge from last year’s extreme sector volatility…as the strongest competitor in our business.”

ConocoPhillips followed several other energy majors with a strong first quarter earnings report and expectations for upticks in production. The company said it started the second quarter with 15 drilling rigs — 11 in the Permian and four in the Eagle Ford.

Since last summer, producers have brought back online nearly 200 rigs that had been idled earlier in 2020 because of the pandemic, Baker Hughes Co. data show. The U.S. rig count finished April at a combined 440 oil and gas rigs.

Also on Tuesday, ConocoPhillips said it would pay down its gross debt by $5 billion over the next five years – roughly one-fourth of its current debt level.

The company also plans to sell its Cenovus Energy Inc. shares by the end of 2022. ConocoPhillips owns about 10% of the Calgary producer’s common shares, which have increased about 30% since the start of the year to top $8.00.

ConocoPhillips plans to use the proceeds to fund ongoing share buybacks. The company resumed its share repurchase program earlier this year, buying back $400 million of its stock during the first quarter.

Full-year capex is estimated at $5.5 billion. Lance said on the call that 1Q2021 capex was “artificially low” because of Uri’s impacts in the Lower 48.