BP plc, the longtime No. 1 natural gas marketer in North America, is chasing a larger position in the global liquefied natural gas (LNG) market with two new supply agreements, including one with the world’s third largest LNG importer. 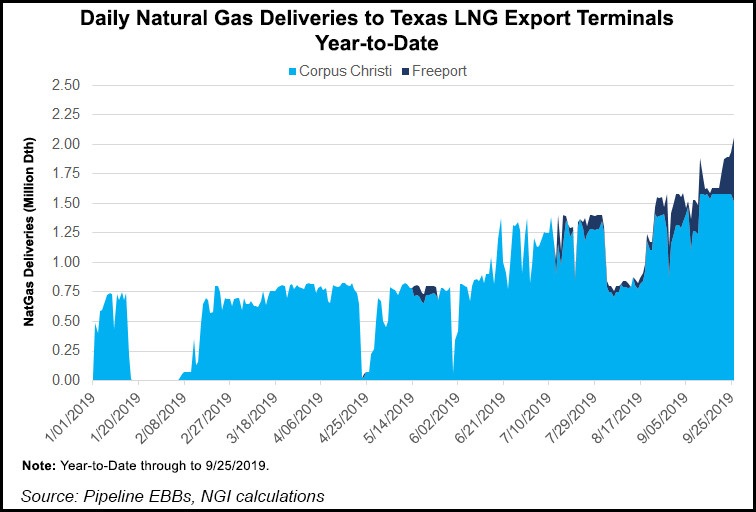 BP on Monday signed an multi-billion dollar supply deal with South Korea’s state-run Korea Gas Corp. (Kogas) to sell 1.58 million metric tons/year (mmty) of U.S. LNG for 15 years starting in 2025. The LNG would be delivered from the Freeport or Calcasieu Pass export terminals along the Gulf Coast, from which BP has secured long-term supply.

Freeport has delivered two commissioning cargoes from the first production unit, with full operations expected before the end of the year. The second and third trains from the Texas facility are expected online by next May, bringing the total capacity to around 15 mmty. Freeport is also mulling a fourth train, which is fully funded and was approved by federal regulators in May; it has not been sanctioned.

Calcasieu Pass, being developed by Virginia-based Venture Global LNG Inc., is a 10 mmty project in Cameron Parish, LA, that is expected to start commercial operations in 2022.

BP has the option to expand the Kogas agreement for three years, bringing the deal’s potential value to an estimated $9.61 billion for 18 years.

“BP and Kogas have a longstanding relationship, and this agreement further strengthens our cooperation with one of the world’s largest LNG buyers,” said BP’s Robert Lawson, COO of gas, supply and trading.

The deal solidifies the company’s continuing strategy of building market share by buying flexible LNG and then selling into markets on a long-term basis at a fixed margin, according to Wood Mackenzie.

“Even if the margin is relatively small, it expands BP’s portfolio and enhances its ability to unlock value through the wider portfolio,” analyst Nicholas Browne said.

Kogas, which imports the bulk of its LNG supply from No. 1 global LNG supplier Qatar, has a 4.9 mmty contract that expires in 2025, according to Wood Mackenzie. “Kogas is looking to fill up its longer-term LNG supply requirement,” Browne said.

South Korea appears to be stepping up its plans to lessen its dependence on coal for power generation. Earlier this month, the National Council on Climate and Air Quality (NCCA) proposed to prevent up to 11 GW (30%) of South Korea’s coal-fired fleet from operating this winter, which could boost gas demand, according to Energy Aspects. The proposal is scheduled to be submitted in early October.

Another deal with Danish utility Orsted was apparently clinched by BP for about 500 million cubic meters/year (17.66 Bcf/d) for five years starting in late 2020. The cargoes are to be sold on a hybrid indexation basis and would be delivered into northwestern Europe or Iberia. Orsted owns capacity at the Gate terminal in the Netherlands and has 3 billion cubic meters of import capacity/year (105.9 Bcf/d).

Meanwhile, Thailand’s PTT Public Ltd. Co. at the end of 2016 struck a 20-year agreement with BP for about 1 mmty. In addition to LNG supply agreements with the Freeport and Calcasieu Pass LNG export terminals, BP also has stakes in Canada’s Woodfibre facility. BP also participates in LNG projects in Australia, United Arab Emirates, Indonesia, Trinidad and Angola. The portfolio includes a mix of long-term, mid-term and short-term supply.

Last month, BP published a master sales and purchase template for LNG contracts to buy or sell physical cargoes on a free-on-board basis. BP, citing the LNG market’s desire for greater standardization, said the templates helped to simplify industry processes and are designed to inform the “broader discussion around standardization and liquidity in LNG markets.”