A rush for liquids-rich natural gas and tight oil embedded in dense rock formations, using shale drilling methods imported from the United States, is bailing the Alberta government out of sinking deeply into the red.

After a stellar revenue performance in its fiscal first quarter April 1-June 30, the provincial treasury has reduced its 2011-2012 deficit forecast by 60% to C$1.3 billion (U.S. dollar at about par) from C$3.4 billion. The biggest single gain is surging revenues from sales of the province’s petroleum and natural gas rights at twice-monthly auctions. Four-fifths of Alberta mineral rights are Crown, or provincial property.

The official forecast of annual revenues from twice-monthly rights auctions has been raised by 130% to C$2.4 billion from the treasury’s original guess of C$1 billion in its budget last spring. It was an easy prediction to make in a government quarterly report on the provincial finances, released recently. In fiscal first-quarter 2011-2012, rights sales were C$1.2 billion or half the new projection for the full budget year.

As of the latest Alberta drilling rights auction, held Aug. 10, sales for this calendar year already stood at C$2.2 billion. The figure foreshadows a record-breaking annual performance, topping the previous calendar-year high of $2.4 billion in 2010.

In both 2010 and this year, industry has lined up to bid for rights spreads known to be rich in liquids-rich gas and light oil packed into dense rock. The formations have been made productive using the U.S. shale gas system of long horizontal wells and multiple fracturing injections of fluids under high pressure.

Although environmentalists and communities near the activity have been asking questions, Alberta has answers and the province has no counterpart to the heated public resistance that the technology has aroused in the U.S. Unlike the shale development frontiers such as Pennsylvania, New York State and Quebec, as Canada’s mainstay fossil-fuel producing province Alberta has long-standing regulation for all types of drilling.

The Alberta regulatory regime has for generations banned storage or disposal of drilling or hydraulic fracturing fluids in open-air sumps or pits, and required well bores to be cased in steel and cement down to bedrock below drinkable water aquifers. As a result, the industry has been able to apply the new technology across the province rapidly, including in areas which are studded with country residential and recreational developments within one-hour drives of Calgary and Edmonton.

Companies and the province’s Energy Resources Conservation Board (ERCB) have been holding community information sessions as the drilling wave spreads.

Results of the industry activity are already evident. The ERCB’s latest annual reserves report showed a 140% increase in successful Alberta light oil wells during 2010 to 2,308. The number of oil successes is projected to increase to 2,800 wells this year, and hold up at an annual average 2,500 over the next decade.

Overall drilling activity, as shown by well counts, will rise by 7-11% this year, say current forecasts by the Canadian Association of Oilwell Drilling Contractors and Petroleum Services Association of Canada. The well counts understate the scale of the activity growth. The new technology increases the time, money and labor used on drilling and completion services for each well, the industry associations say.

While volume increases and other aspects of the role of liquids-rich gas in the Alberta drilling revival remain matters of study and controversy among industry experts and financial analysts, the provincial treasury’s figures point to early signs of growth.

The government’s quarterly report projects an increase in gas royalty revenues. Production is forecast to go up despite expectations that the Alberta annual average gas price will stagnate at C$3.45/gigajoule (GJ) (US$3.62/MMBtu).

Production increases are a byproduct of increased drilling for liquids-rich gas targets. By historical standards Alberta gas revenues remain severely depressed. Provincial gas royalty revenues for fiscal 2011-2012 are forecast to be C$1.054 billion, up C$32 million from 2010-2011 but still down by 88% from their peak C$8.4 billion in 2005-2006. 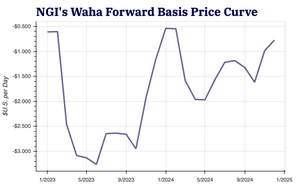