Houston-based W&T Offshore Inc. has added to its Gulf of Mexico (GOM) portfolio after claiming stakes in three blocks producing for the deepwater Heidelberg development operated by Anadarko Petroleum Corp. 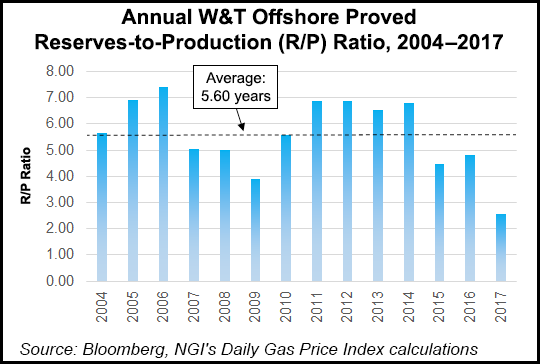 At $31.1 milion, W&T was high bidder for a 9.375% working interest in each of Green Canyon (GC) blocks 859, 903 and 904. The stakes were offered as part of the Chapter 11 bankruptcy proceedings of Cobalt International Energy Inc. Cobalt agreed to sell some of its GOM portfolio after filing for voluntary bankruptcy in December.

The interests are being acquired “at an attractive valuation and will contribute solid production and reserves, as well as offer upside potential,” said W&T CEO Tracy Krohn. The transaction is expected to close in early April.

Heidelberg, a truss spar development estimated to hold 200-400 million boe of recoverable resources, is 140 miles southwest of Port Fourchon, LA, and is sited within the prolific Lower Tertiary Trend. The facility began commercial operations in 2016.

W&T already holds interests in 49 producing fields in GOM federal and state waters and has under lease about 700,000 gross acres, including 470,000 on the Outer Continental Shelf and 230,000 in the deepwater.

Heidelberg is the twin spar to the ExxonMobil Corp.-operated Lucius discovery. Each spar is able to produce up to 80,000 b/d of oil and 80 MMcf/d of natural gas.

ExxonMobil and Anadarko in 2011 agreed to team up on their big deepwater discoveries using unitization, which jointly coordinates separate discoveries.

In addition to the spar, the Heidelberg development initially was to include six production wells, two drill centers, and dual looped eight-inch diameter flowlines.