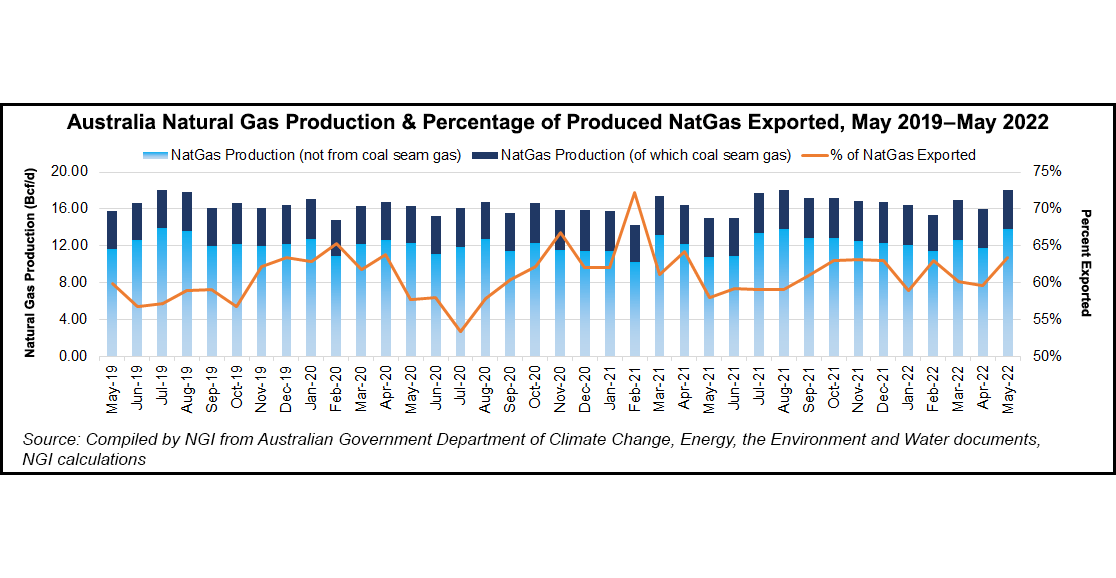 Woodside is also protecting against potential “downside pricing risk” by hedging its future contracted volumes from Cheniere Energy Inc.’s Corpus Christi LNG with Henry Hub and Title Transfer Facility (TTF) commodity swaps. Around  94% of Corpus Christi volumes in 2022, 73% in 2023 and 27% in 2024 have been covered with hedges, according to the company.

Elsewhere, in Africa, Woodside has decided to end efforts to sell equity stakes in the Sangomar Field Development project. The field, formerly known as SNE, is located offshore of West Africa in the coastal waters of Senegal and contains both gas and oil reserves. O’Neill said the decision came after “extensive discussions with potential new partners.”

Despite slightly reduced volumes and sales during the second quarter, Santos reported the last three months helped it reach a record first half of the year for production, sales revenue and free cash flow.

The company was positioned to take advantage of forecasted demand growth from Asia over the next few years, but it also needed to focus on domestic customers’ near-term needs, said Santos’ CEO Kevin Gallagher

He said the company “supported the domestic gas market during a period of extreme demand by diverting gas” from the Golar LNG terminal and committing a fifth drilling rig in the onshore Cooper Basin.

“Despite the period of price and demand volatility, Santos domestic gas customers paid significantly less than that paid by international customers,” Gallagher said.

While LNG exports have continued to remain sky high from Australia, the country has also been dealing with regional domestic shortages. Differing gas conservation policies between East and West Australia have complicated the issue as domestic customers and regulators question the costs of LNG exports.

Santos disclosed that LNG volumes and related revenues decreased during the quarter mostly due to declining production from the Bayu-Undan field, which is anticipated to cease production later in the year.

Neither Woodside nor Santos disclosed net income or loss results in their 2Q2022 reports. Both companies promised more definitive financial information in their upcoming half-year reports.