The United States has the potential to be the world’s largest liquified natural gas (LNG) exporter in 2022, according to new analysis, boosted by swelling supplies and growing LNG terminal capacity. 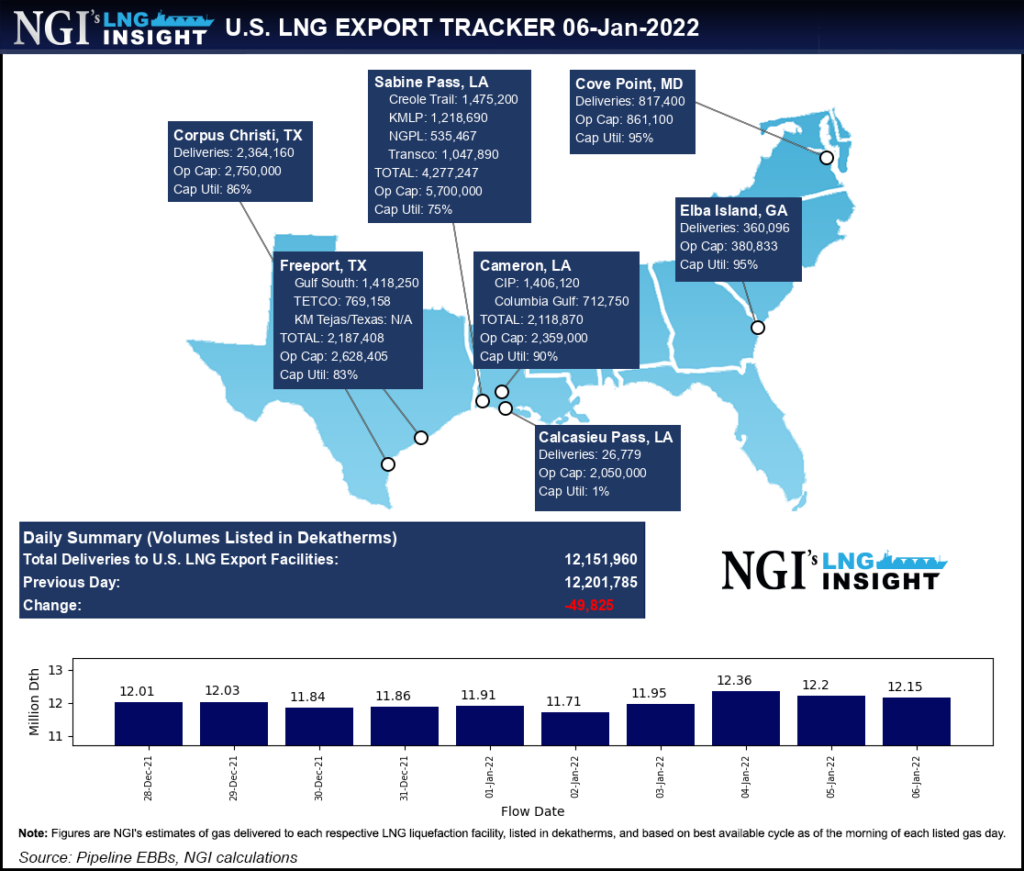 In a new report by researchers at IHS Markit, the United States could jump from the third largest exporter in 2021 to the top spot, overtaking Australia and Qatar.

“A new map of LNG is taking shape as 2021 became the year of rapid recovery, making the oversupply and price lows of 2020 seem like a distant memory,” said IHS Markit’s Michael Stoppard, chief strategist of global gas. “It is a tale of two markets with China fueling the demand surge as the world’s top importer and the United States, poised to become the world’s leading exporter, providing the supply push.”

According to researchers, the United States saw the largest LNG supply growth in 2021, up 52% year/year, with an additional 25.3 million metric tons (mmt), to reach 73.6 mmt. During roughly the same period, U.S. LNG terminals improved the use of available liquefaction capacity from 43% in the third quarter of 2020 to 98% in 2021.

IHS Markit extrapolated the trends and fluctuations in the global LNG landscape to predict the potential rise by the United States. It also detailed China’s ascension as the world’s largest LNG importer.

The issues that LNG plants had in the Atlantic and Pacific basins during 2021 led IHS Markit researchers to suggest that the United States may keep an advantage into this year.

All global purchasing agreements signed in 2021 were roughly split between the United States, Russia and Qatar. However, a large swath of the volumes from some of the Russian and Qatari contracts were expected to be sourced from U.S. projects.

More than 65 million metric tons/year (mmty) of long-term contracts were signed in 2021, according to IHS, breaking the 2013 record of 61 mmty.

Headed into 2022, pre-final investment decision (FID) contracts favored U.S. projects, as most Qatari and Russian contracts were for already existing capacity or on projects still under construction.

Meanwhile, more than 10 of Qatar’s medium and long-term agreements worth an estimated 16.89 mmty of LNG are set to expire between 2021 and 2025, according to data from the International Group of LNG Importers (GIIGNL), but the country has made aggressive moves to maintain its lead in global exports.

Through 2021, Qatar signed at least 10 long-term sales and purchase agreements, committing to supply 17.8 mmty of LNG for 10 to 20 years.

Five of those contracts for 8.5 mmty were signed with China, while another five contracts for 9.3 mmty were spread amongst Bangladesh, Pakistan, Taiwan, Singapore and South Korea. Qatar is also likely to remain dominant after sanctioning the massive North Field East (NFE) LNG project last year.  NFE would boost Qatar’s overall LNG production capacity to 110 mmty from 77 mmty. It is the first phase of a broader plan to further increase Qatar LNG production to 126 mmty.

At least 10 LNG export projects and capacity expansions have been approved by federal regulators at existing U.S. terminals, including in Cameron, LA, and the Freeport and Corpus Christi projects in Texas. Together they would total 25 Bcf/d of new capacity, according to the Energy Information Administration.

The expansion projects, along with newbuilds such as Tellurian Inc.’s Driftwood LNG in Louisiana, are targeting 2022 final investment decisions (FID). Other new projects, like Sempra’s Port Arthur LNG project near Houston have delayed their FIDs.

According to data by Bloomberg, U.S. LNG terminals sent out a record 1,043 cargoes during 2021. Almost half of those deliveries went to Asia, and one-third went to Europe.

Much of the potential U.S. gain over other large exporters has been attributed to the growth in liquefaction production that would come with the completion of Cheniere Energy Inc.’s sixth train at its Sabine Pass LNG plant in Louisiana. Train 6 produced its first LNG in November, and could add 760 MMcf/d when completed, which is expected by the end of March.

Reports from earlier this week did show some slight hiccups in the beginning of the country’s big year, as deliveries to Sabine Pass LNG were lower than previously expected due to the train not yet being in commercial service.