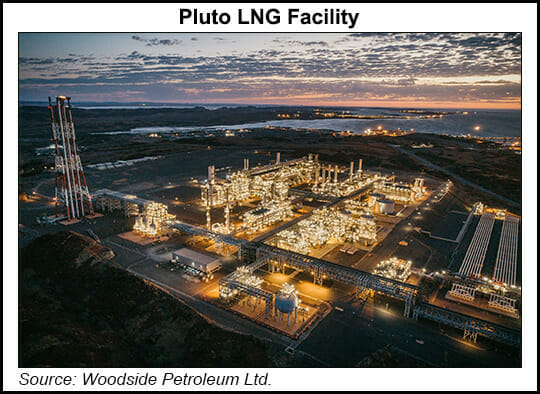 Woodside said last week it and joint venture partner EDL had inked a 10-year SPA with miner Strandline Resources Ltd. to supply LNG to the Coburn mineral sands project during 2Q2021. Since then, it has signed a similar deal to supply Abra Mining and Industrial Corp.’s base metals project for five years, and another with Calidus Resources Ltd. for a term of seven years for the Warrawoona Gold project.

Additional terms were not disclosed. Woodside said it continues to target about 10-15% of its produced LNG to be sold on the spot market in 2021.

The truck loading facility at the one-train, 5 million metric ton per year (mmty) Pluto LNG terminal came online in 2019. In its 2020 full-year report, released in February of this year, Woodside said it had been seeking to grow its trucking business, “which complements our existing equity domestic gas sales.”

While Woodside highlighted the domestic sales of LNG, Australia is a major exporter of the super-chilled fuel to the Asia-Pacific region. In the second quarter, LNG sales from Woodside’s Pluto, Wheatstone and North West Shelf facilities totaled about 2 million metric tons (mmt), up slightly from 1Q2021. However, that was still down from roughly 2.2 mmt in the same period one year ago.

In its 2Q2021 results, Woodside said it was also moving forward with plans for a one-train expansion at the Pluto LNG site on Australia’s northwest coast. The expansion, to be fed from the offshore Scarborough gas field, would effectively double the facility’s capacity to 10 mmty.

Acting CEO Meg O’Neill said “solid progress” had been made and the developments were on track for a final investment decision (FID) in the second half of the year. First cargo is anticipated in 2026.

Ahead of taking FID, Woodside said it launched a formal sell-down process for up to 49% of its equity in Pluto Train 2. It has also begun testing the market “for value-accretive opportunities” to reduce its stake in the Scarborough field. Woodside is operator of the field with a 75% interest, while BHP holds the remaining 25%.

O’Neill said the company was “reviewing project cost estimates following extensive engagement with our contractors over recent months in the lead up to the investment decision.”

Woodside said it had gained some ground in the implementation of its new energy strategy, which calls for a 30% reduction in emissions at Pluto, with the goal of reaching net-zero emissions at the facility by 2050.

The company is looking into supplying about 50 MW of solar energy to Pluto LNG from its proposed Woodside Power project. The solar facility would be one of Australia’s largest, with more than 210,000 solar panels with 100 MW of capacity. Woodside said last month the scheme would result in a direct reduction in Scope 1 greenhouse gas emissions from Pluto LNG.

The company has other green initiatives up its sleeve as well. O’Neill said Woodside has signed a heads of agreement with Japan’s IHI Corp. and Marubeni Corp. to jointly investigate  production and export of green ammonia from renewable hydroelectric power.

“Initially, green ammonia would be produced at a small-scale hydrogen electrolysis plant, which could then be scaled up to produce export volumes,” O’Neill said.

Overall production in 2Q2021 was 22.7 million boe, a 4% drop from the previous quarter because of turnaround activities and weather, Woodside said. The figure was also lower compared to 2Q2020, when Woodside logged total production of 25.9 million boe.

However, the decline in the most recent quarter was partially offset by higher output from Pluto LNG, which produced 1.2 mmt during the period. Previously, the facility produced 1.1 mmt in 1Q2021 and roughly 1.2 mmt in 2Q2020.

Despite the lower production, revenues grew 15% quarter/quarter, owing to higher commodity prices. The company reported $1.29 billion in sales revenue for 2Q2021, compared to 1.12 billion in the previous quarter and $805 million in 2Q2020.