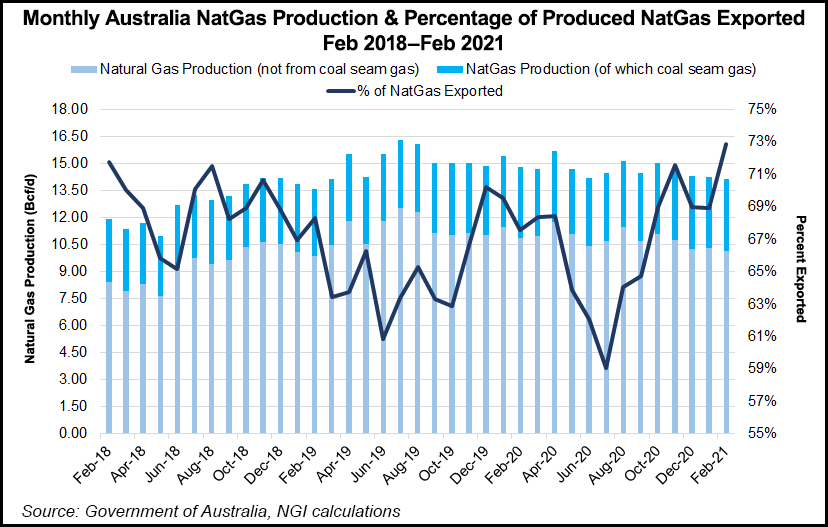 The 1Q2021 LNG revenues were lower than the $854 million reported a year ago, when prices averaged $47/boe.

“Woodside achieved record spot LNG prices and its highest price premium for an oil cargo during the period,” acting CEO Meg O’Neill said regarding the 1Q2021 results. “More importantly, the sustained increase in oil and gas prices reflects the rebound in demand as economic conditions improved across Asia. The swift rebalancing of markets after the disruptions of 2020 further underpins our positive outlook for LNG in the medium term.”

Overall, Woodside reported a 22% jump in sales revenues quarter/quarter as prices for both oil and natural gas improved. Sales revenue of $1.12 billion was also 4% higher year/year.

Overall production was 23.7 million boe, down 2% from the same period a year ago, while overall sales volumes of 25.7 million boe represented an 8% increase from 1Q2020.

Meanwhile, Santos, Australia’s largest domestic natural gas supplier, reported LNG sales volumes of 1.33 million metric tons (mmt) for the first quarter, compared to 1.38 mmt in 4Q2020 and 851,600 metric tons one year ago. The jump in production year/year was mainly because of its acquisition of ConocoPhillips’ Australia assets last May.

“First quarter sales volumes were lower than the prior quarter primarily due to lower domestic gas sales in Western Australia, lower third-party crude volumes and the timing of crude liftings, partially offset by the timing of condensate liftings,” Santos said in its earnings report.

First quarter production, meanwhile, totaled 24.8 million boe, 39% higher year/year primarily because of the ConocoPhillips deal. It was still 2% lower than the previous quarter’s production, however.

Neither Woodside nor Santos disclosed net income/loss results. Those results are reported in mid-year and full-year reports.

Australia is a major supplier of LNG to the Asia-Pacific region, and Santos and Woodside laid out plans to boost production.

Santos plans to kick off a $235 million infill drilling program at the Bayu-Undan field in the Timor Sea in the second quarter to extend the life of the field and for Darwin LNG production. The company recently signed a memorandum of understanding with Italian major Eni SpA to look into sharing infrastructure around the recently sanctioned Barossa development to extend the life of Bayu-Undan, as well as Darwin plant and other expansions.

Meanwhile, Woodside ramped up engineering and procurement activities in anticipation of a final investment decision on the second train at its Pluto LNG project in Western Australia. The modifications would enable the unit to process up to 3 million metric tons/year (mmty) from the Scarborough field offshore Western Australia. Combined with Train 2, the facility would produce up to 8 mmty.