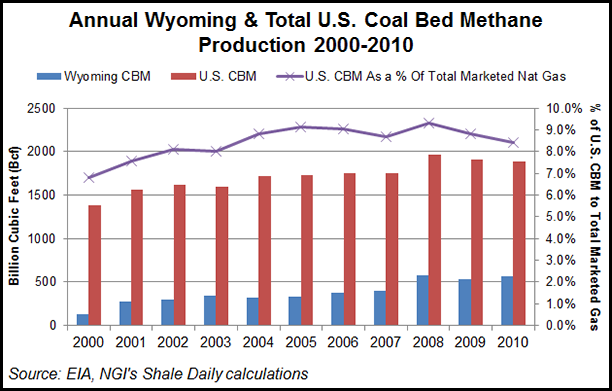 After learning this past summer that Anadarko was soliciting bids for all of its operated coalbed methane (CBM) assets in the Atlantic Rim Project (see Shale Daily, Oct. 3; Sept. 6), Warren, which was a working partner with Anadarko on a number of the assets, decided to exercise its preferential rights to purchase Anadarko’s share.

In addition, Warren acquired all of Anadarko’s 50% interest in the gas gathering, compression and pipeline midstream assets within the Atlantic Rim Project for a purchase price of $4 million. The midstream assets consist of gathering and compression equipment and a 59-mile long pipeline that transports gas from the gathering systems throughout the Spyglass Hill Unit area to the Wyoming Interstate Company (WIC) interstate gas transportation pipeline.

As a result of the transaction, Warren’s estimated proved developed reserves in the Atlantic Rim increased by approximately 18.3 Bcf. Additionally, the acquisition will add natural gas production of about 7.8 MMcf/d. As a result Warren acquired proved developed reserves at a price of $0.65/Mcf, or approximately $1,550 per flowing Mcf, of natural gas production.

Warren exercised its preferential rights to purchase Anadarko’s interests after Anadarko advised Warren that it had entered into an agreement to sell these assets to Double Eagle Petroleum Co. on Aug. 16.

With the arrival of shale gas development and depressed natural gas prices, CBM production as a share of total U.S. gas production in the United States has declined every year since 2008.

According to the Energy Information Administration (EIA) and data compiled by NGI’s Shale Daily, Wyoming saw the most CBM production in 2010 within the United States with 566 Bcf. Colorado and New Mexico were second and third with 533 Bcf and 402 Bcf, respectively. Overall, CBM production accounted for 8.4% of total U.S. marketed natural gas in 2010, but that percentage has fallen each year since reaching a 10-year peak of 9.3% in 2008.

Complete statistics from the EIA are not available for 2011, but CBM most likely contributed even less to the overall U.S. production picture in 2011, given the continued rise in shale and other unconventional drilling, and the general lack of drilling capital that producers dedicated to dry gas areas in recent months. CBM plays are almost 100% methane and therefore do not receive any economic uplift from natural gas liquids production.