The U.S. economy’s reopening amid the Covid-19 pandemic jump-started the oil and natural gas midstream recovery in the second half of 2020. But, the recent rise in oil prices could spur renewed activity in a handful of basins, benefiting some operators in the year ahead. 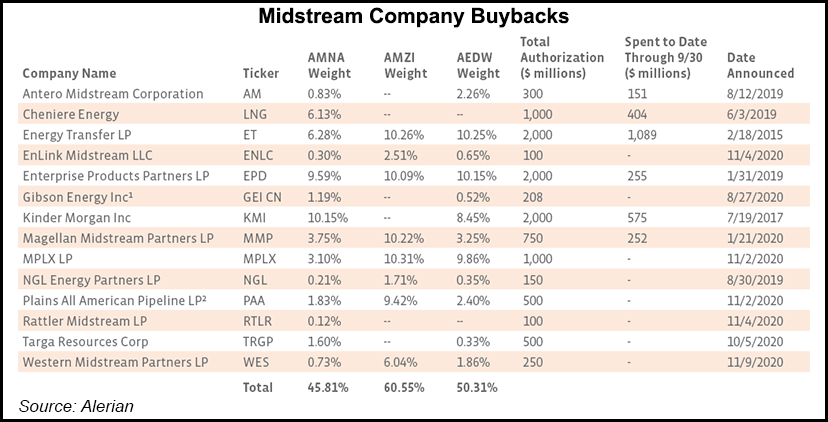 A Raymond James & Associates Inc. team, led by analysts Justin Jenkins and J.R. Weston, said operationally, the general consensus is that the Permian Basin would lead the next leg of performance among midstreamer companies, but the Bakken Shale/Denver-Julesburg Basin may need prices around $50/bbl to work.

“We are now there, but will it hold?” analysts asked.

U.S. oil prices crossed the $50/bbl threshold on Jan. 5 after Saudi Arabia announced it would cut oil production by a stunning 1 million b/d in February and March. The news came at the conclusion of the latest monthly meeting of the Organization of the Petroleum Exporting Countries and its allies, aka OPEC-plus. Saudi Arabia leads the cartel.

Raymond James noted that the decision by OPEC may help keep oil prices afloat, but analysts also noted that dry gas may play a role in the eventual supply response, with Haynesville Shale activity possibly picking up more quickly than the Marcellus/Utica shales.

On the demand side, propane markets are “very tight,” though the budding optimism in the market “might be a touch excessive,” according to the firm. Additionally, it said with demand/export growth on deck and some supply headwinds, ethane recovery “should happen everywhere” other than the Bakken — “perhaps providing more of a volume tailwind than would have otherwise been expected.”

On the refined products side, the Raymond James team sees demand improving through 2021, with the real inflection occurring around mid-year. “This improvement should benefit our refining coverage, and higher utilization rates should flow through as higher volumes across the midstream value chain.”

Overall, the demand-pull environment “still looks attractive” in 2021 and beyond, with the recovery in U.S. liquefied natural gas (LNG) exports adding to a “solid base,” according to Raymond James. U.S. LNG exports have recovered “massively” thanks in part to soaring Asian prices — “about as good of a recovery play as one can find within the U.S. midstream space,” analysts said.

Furthermore, natural gas liquids markets are expected to tighten and support gathering and processing (G&P) and pricing, according to the analysts, with G&P offering investors the most “bang for their buck” going forward.

On a macro level, Raymond James said while the U.S. economy’s flip from lockdown to reopen mode jump-started the midstream sector late last year, inflation, its impact on the U.S. dollar and how this corresponds to oil prices could benefit the energy sector more broadly in the year ahead.

Meanwhile, possible shifts in the U.S. tax regime should favor master limited partnerships primarily, and midstreamers’ contractual ability to pass through inflation to customers has become a “widely under-appreciated item.”

The firm noted that the midstream sector has been on a path of lowering payout ratios, reducing expenses and high-grading capex for several years. However, it views 2021 as the true free cash flow (FCF) inflection point that should support balance sheets and buybacks.

Helping to drive FCF, according to the Raymond James analysts, may be projected headwinds to upstream activity and project development in the wake of last week’s Georgia Senate run-off election. The election results, political/governmental pressure and the energy evolution are themes that “clearly won’t go away anytime soon,” they said.

Furthermore, a handful of DC “centrists” are unlikely to allow wholesale “Green New Deal” initiatives to take hold, which would be positive for the oil and gas industry. That said, while there’s enough near-term “wood to chop,” the team indicated that “reasonable” positioning by midstream for the energy evolution is one way to help regain historical multiples via improved terminal value outlooks.

“It is our view that a ‘muddle through’ energy fundamental scenario should create more bifurcation between ‘haves’ and ‘have nots’ within the space than we’ve seen thus far,” Raymond James said.

Potential demand-side headwinds could still develop this winter, as seen already in parts of Europe, and OPEC-plus decision-making is always a wildcard, according to the firm. If the market can digest these overhangs, investors may see a 2021 that could actually look relatively “normal” across most of the North American midstream sector, it said. “Regardless, counterparty risk, contract revisions and upstream consolidation remain key risks for the group.”

East Daley Capital Advisors Inc. said one of the most impactful issues at hand for the midstream sector in 2021 is that, with the production and refining cutbacks in 2020, infrastructure overbuilding now plagues most basins, most commodities and most asset classes.

RBN Energy LLC analyst Housley Carr broke down some of the key points in East Daley’s “Fight or Flight: Taking Stock of the Midstream” outlook. In the report, East Daley anticipates an “ever-worsening” rate environment for three important crude oil transportation corridors — the Permian to the Gulf Coast, Western Canada to the United States, and Cushing to the Gulf Coast.

“Midstreamers with more than their share of exposure to those rates and volumes have their work cut out for them,” Carr said.

Currently, the worst-positioned midstream companies are mostly smaller ones with G&P assets in second- or third-tier basins — namely, anywhere but the Permian or the Marcellus. For example, barely half of Altus Midstream Co.’s 1 Bcf/d of gas processing capacity in the Alpine High play in the Permian is being used. East Daley’s outlook indicates that the situation could improve if associated gas production at Alpine High increases faster than it’s now expected to.

Meanwhile, EnLink Midstream LLC has underutilized G&P assets in the SCOOP/STACK (South Central Oklahoma Oil Province and Sooner Trend of the Anadarko Basin, mostly in Canadian and Kingfisher counties) in Oklahoma and the Barnett Shale in North Texas.

Other important issues for the midstream sector, according to East Daley, include how the relative strength of gas production versus crude may benefit selected midstream companies in gas-focused basins and how gas processors in the Permian may achieve full utilization of those assets by early 2024, or as soon as late 2021 if oil prices rise. Furthermore, legacy crude oil pipelines out of the Permian may face big rate cuts as their existing tariffs expire.

The incoming Biden administration also may pose a risk by way of a possible freeze on oil and gas development on federal lands and additional hurdles for new-builds like Keystone XL and the Mountain Valley Pipeline, East Daley said.

At the end of it all though, there is some good news, according to Carr. While it took a pandemic, two commodity-price crashes (in 2014-15 and 2020) and many years of overspending, midstream companies are finally laser-focused on generating FCF, cleaning up their balance sheets and funding growth without issuing new equity or debt.

“Given the challenges that midstreamers are likely to face as North America emerges from the dark cloud of Covid-19 — not to mention the push for decarbonization and environmental, social and governance — that financial discipline will come in handy.”